PBR: Physically based rendering - Main PBR "channels" - The Metallic channel - The Base Color channel - Replacing Iron Old with a pure metal - The Roughness channel - Additional channels: Normal and Height to simulate some details

In this tutorial I'll talk you about the Physically Based Rendering method (or “paradigm”), in particular in Substance Painter.

Substance Painter allows us to define Materials that adhere to the Physically Based Rendering model (PBR; sometimes you will also find PBS, which stands for Physically Based Shading, with reference to the surfaces of the objects, of course).

A PBR Material is made by a few Textures (images which are mapped on the 3D objects); here, we will see only what they are and, above all, how they combine with each other to define a PBR Material in Substance. We need to understand these things in order to be able to create and customize our Materials with confidence, without guessing. 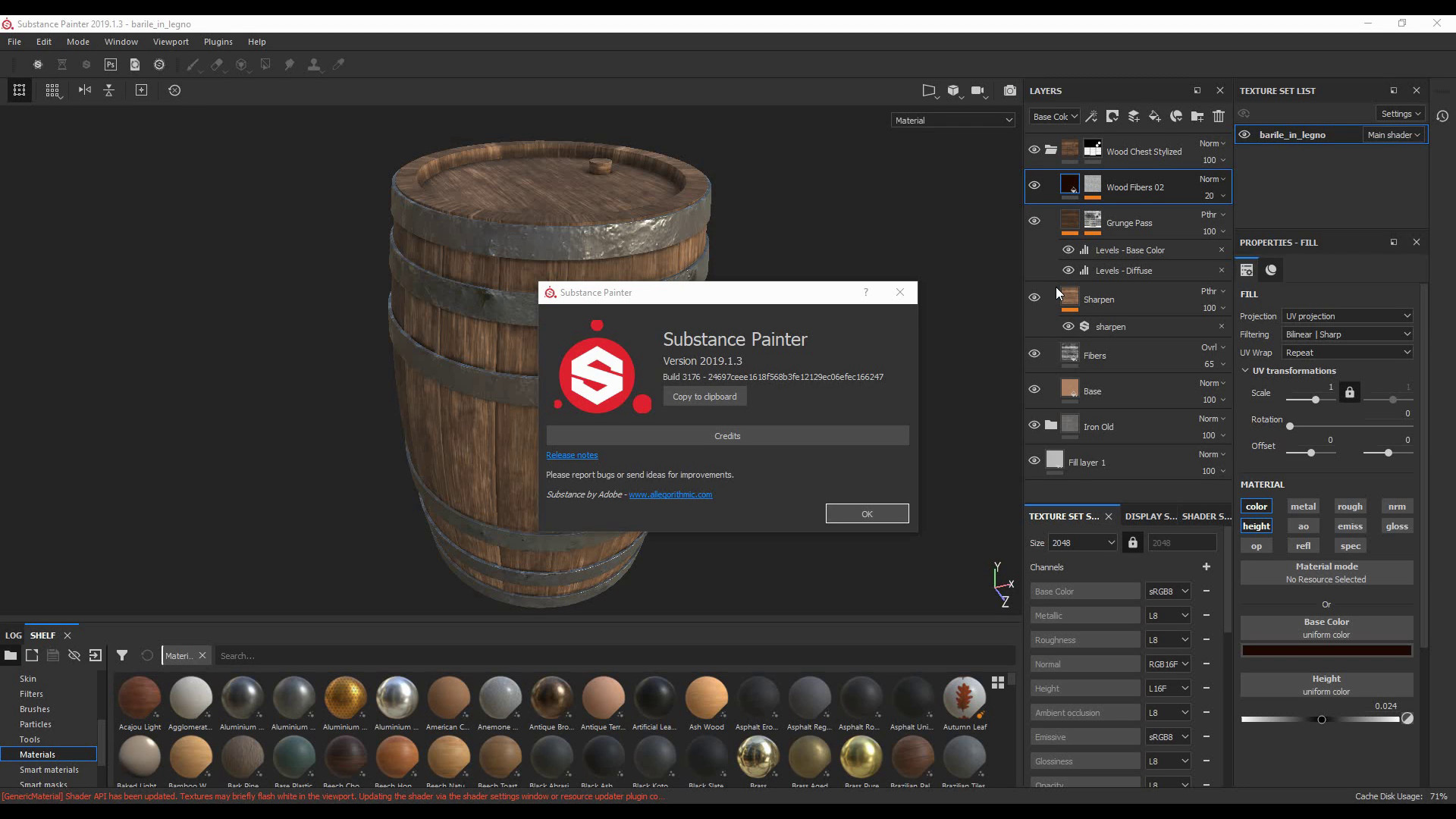 To avoid making this tutorial too theoretical, I will talk about the fundamental elements of PBR and how they translate into Substance using a 3D model already provided with Materials and textured in this program; however, you don't need to have this model to learn from this tutorial. 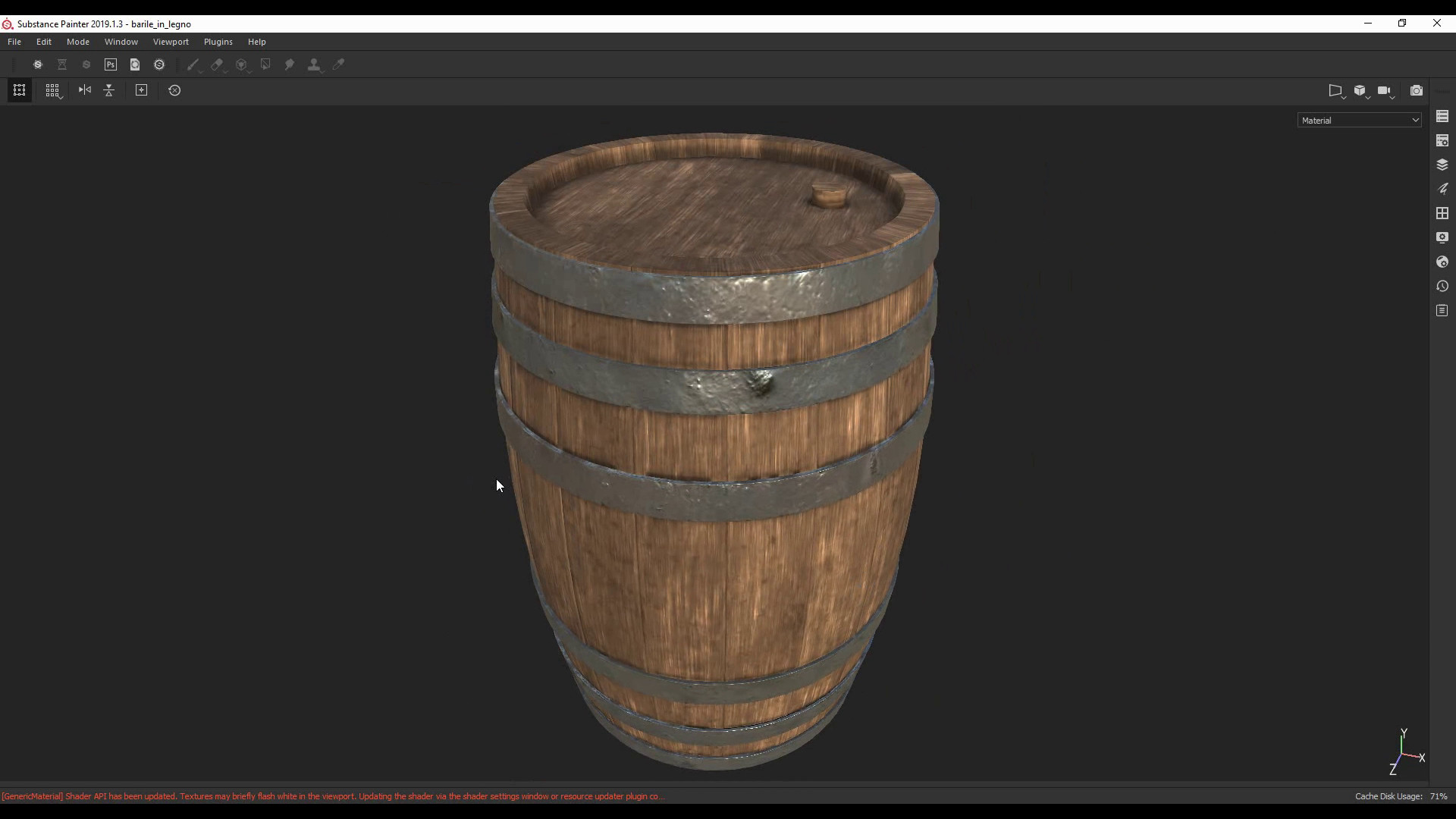 The Physically Based Rendering paradigm, as the name suggests, is based on a physical approach: what happens in the real world.

You can specify the Materials with two working methods: Metallic and Specular.

In the first case (Metallic), we must distinguish the surfaces between metallic and non-metallic and, starting from this distinction, all the other channels behave differently.

In the Specular case, instead, we define the intensity and the color tint of the specular reflections to determine how the light that interacts with the surface of the object will behave.

In particular, in the PBR Metallic workflow (the one used in this example), the appearance of a surface is given by some features, the most important of which are: 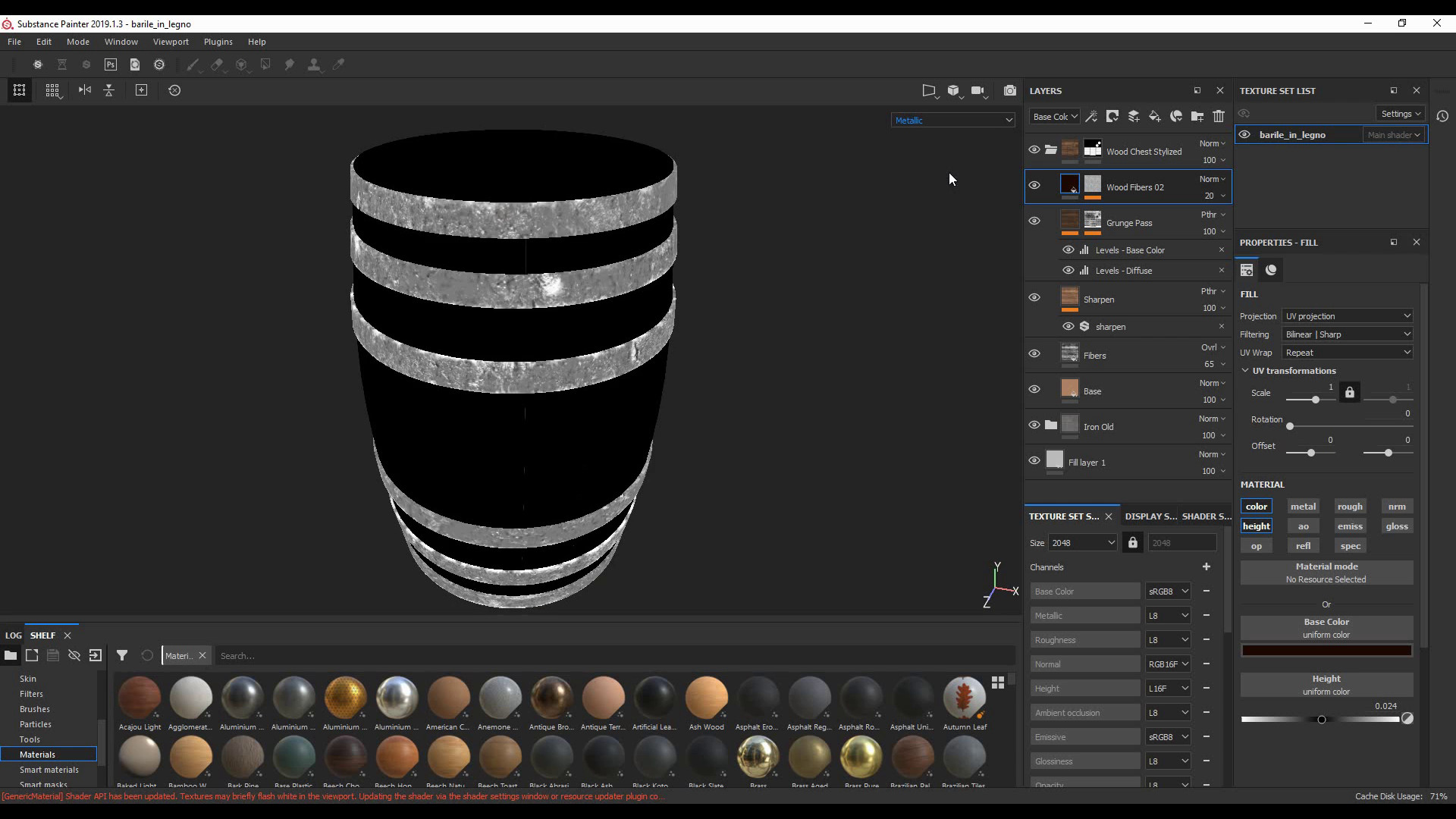 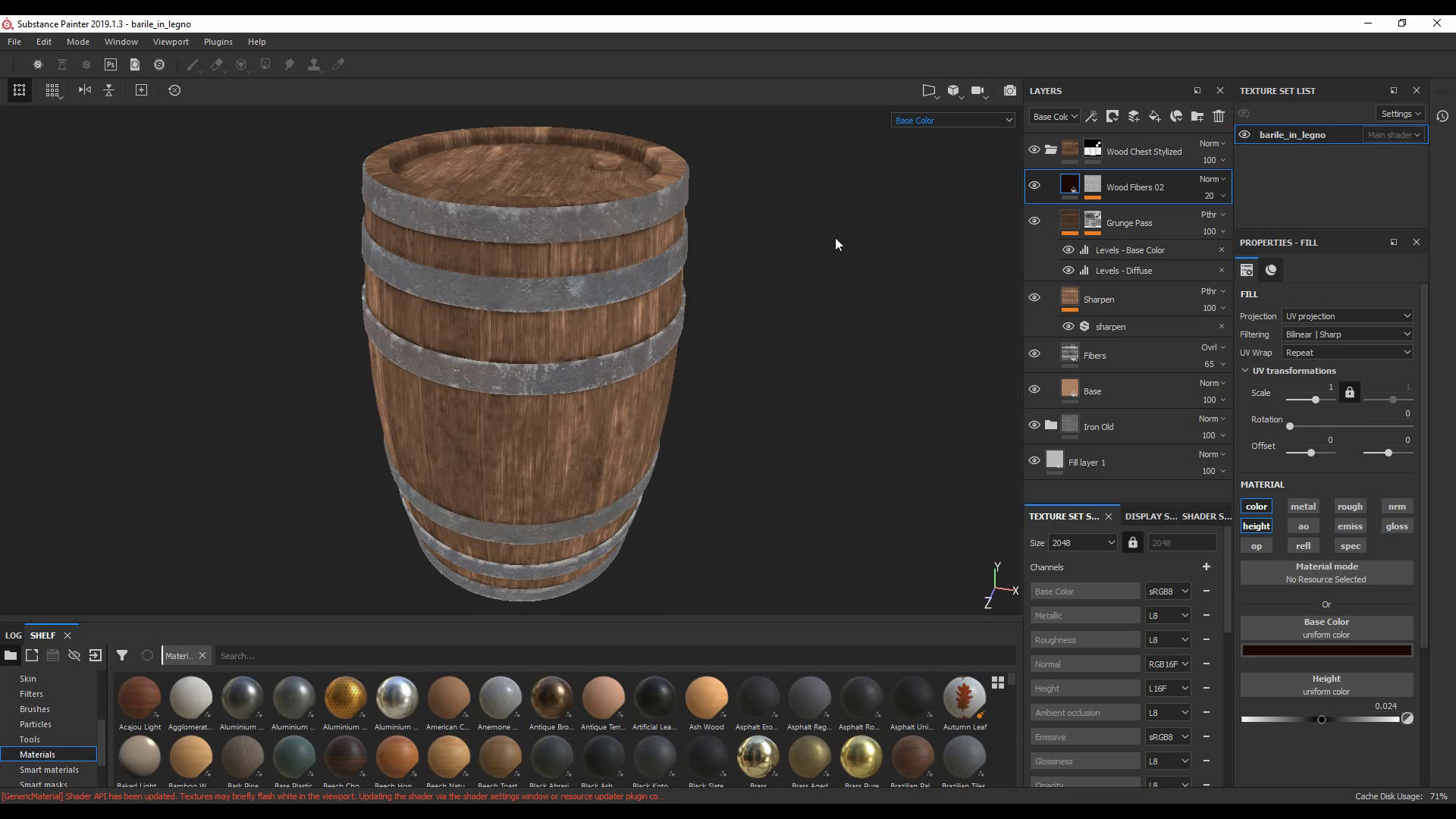 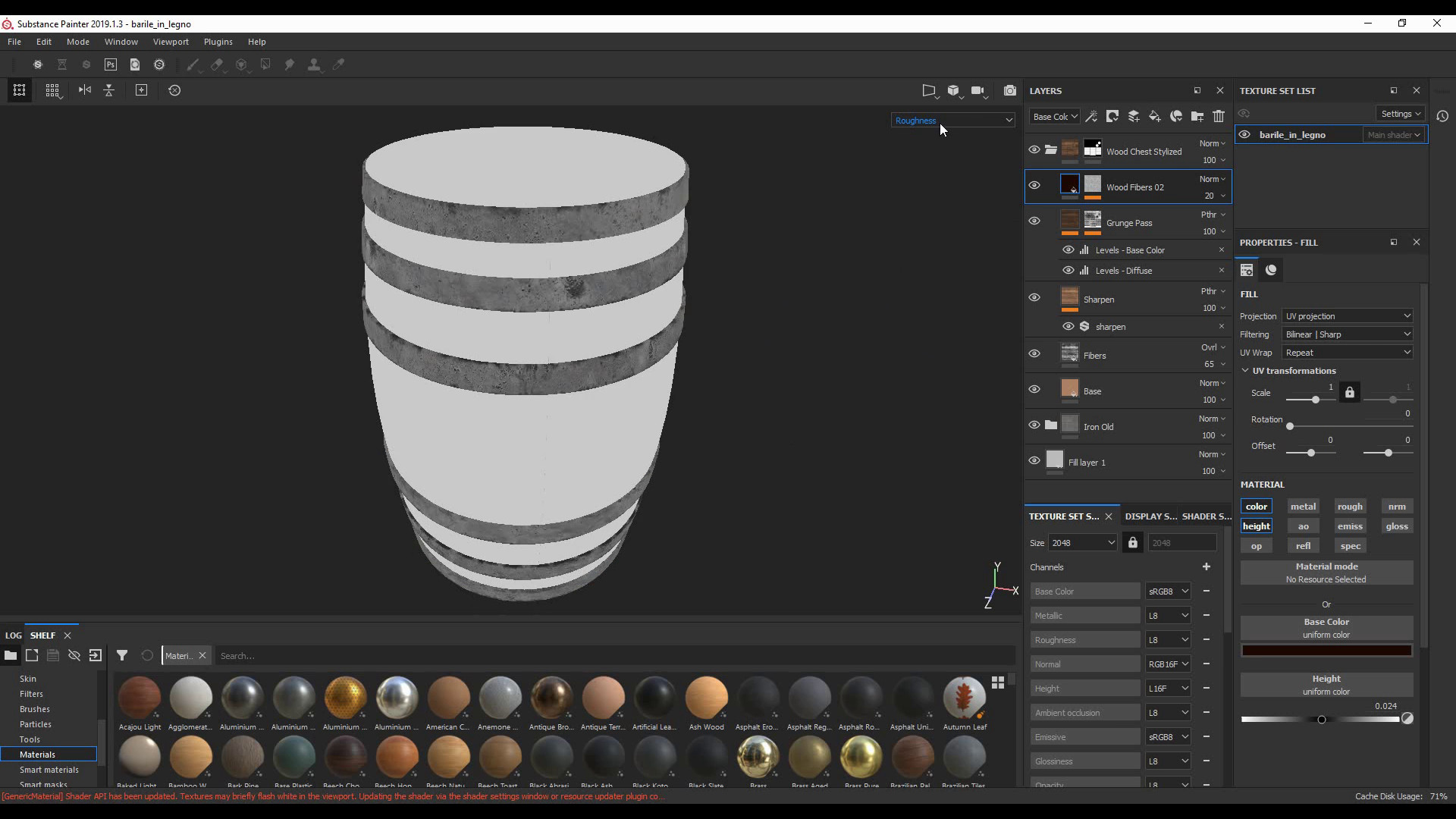 To these characteristics, observed in the real world, some are added that are convenient in the virtual world; for example, through special Textures images such as “Normal Maps” or “Height Maps” it is possible to simulate the presence of details without modeling them on the geometries (in order keep low the number of vertices, edges and faces - and, therefore, to use less computing resources in the rendering phase, in particular in video games and other real-time applications). 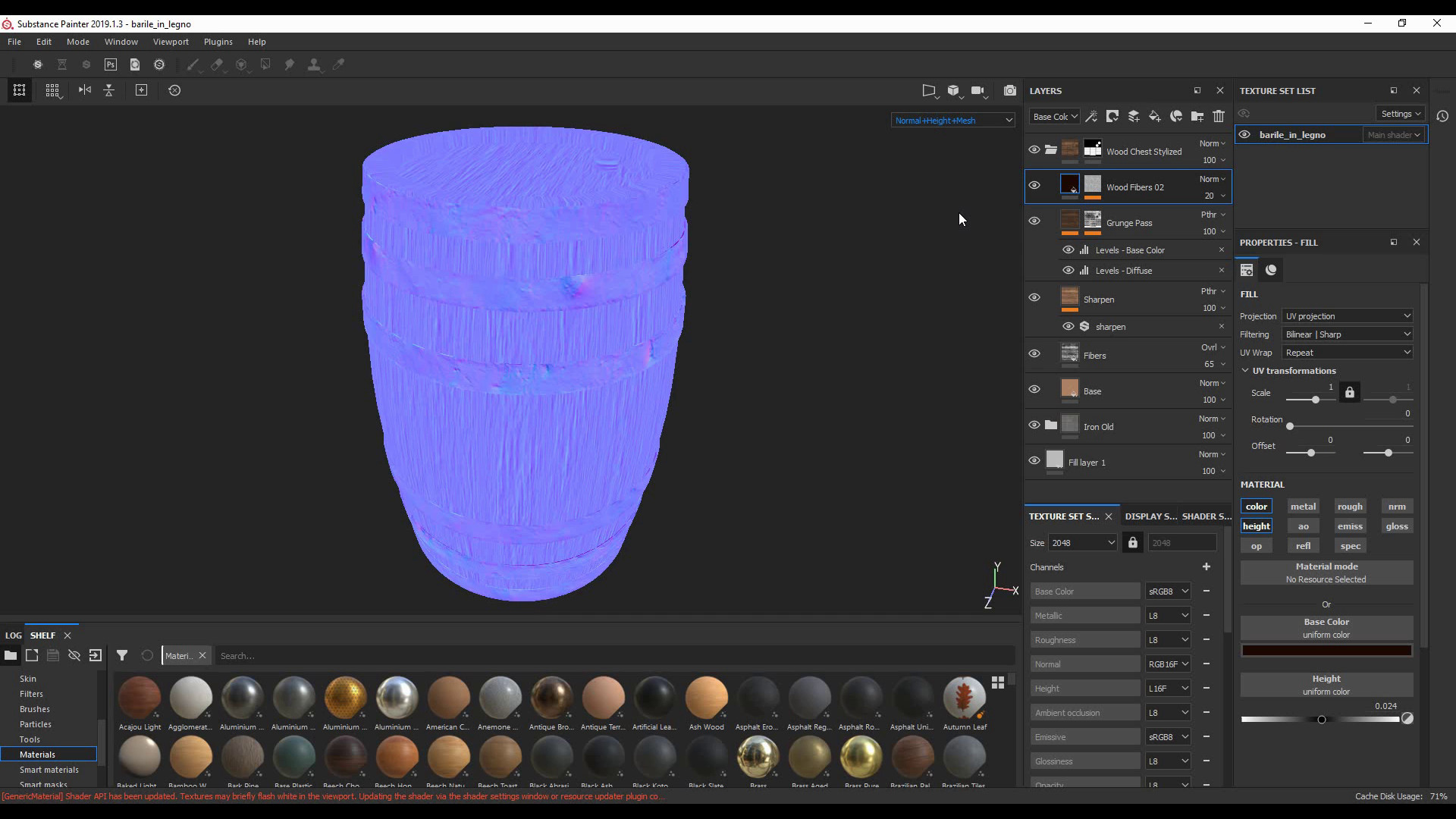 The wooden barrel that I am using in this video allows us to examine, in a single object, how this basic information translates into Textures and combine them into a Substance Material.

As you can see, we have both metallic (iron) and non-metallic (wood) elements, which will allow us to appreciate the differences with which these two types of materials are treated, in the definition of their base color and the colors of the specular reflections, in the PBR paradigm.

To view the individual information channels (which are translated into as many Textures images applied to the surface of the object), we can press the C key several times or choose the channel that interests us in the drop-down menu at the top right in the 3D view. 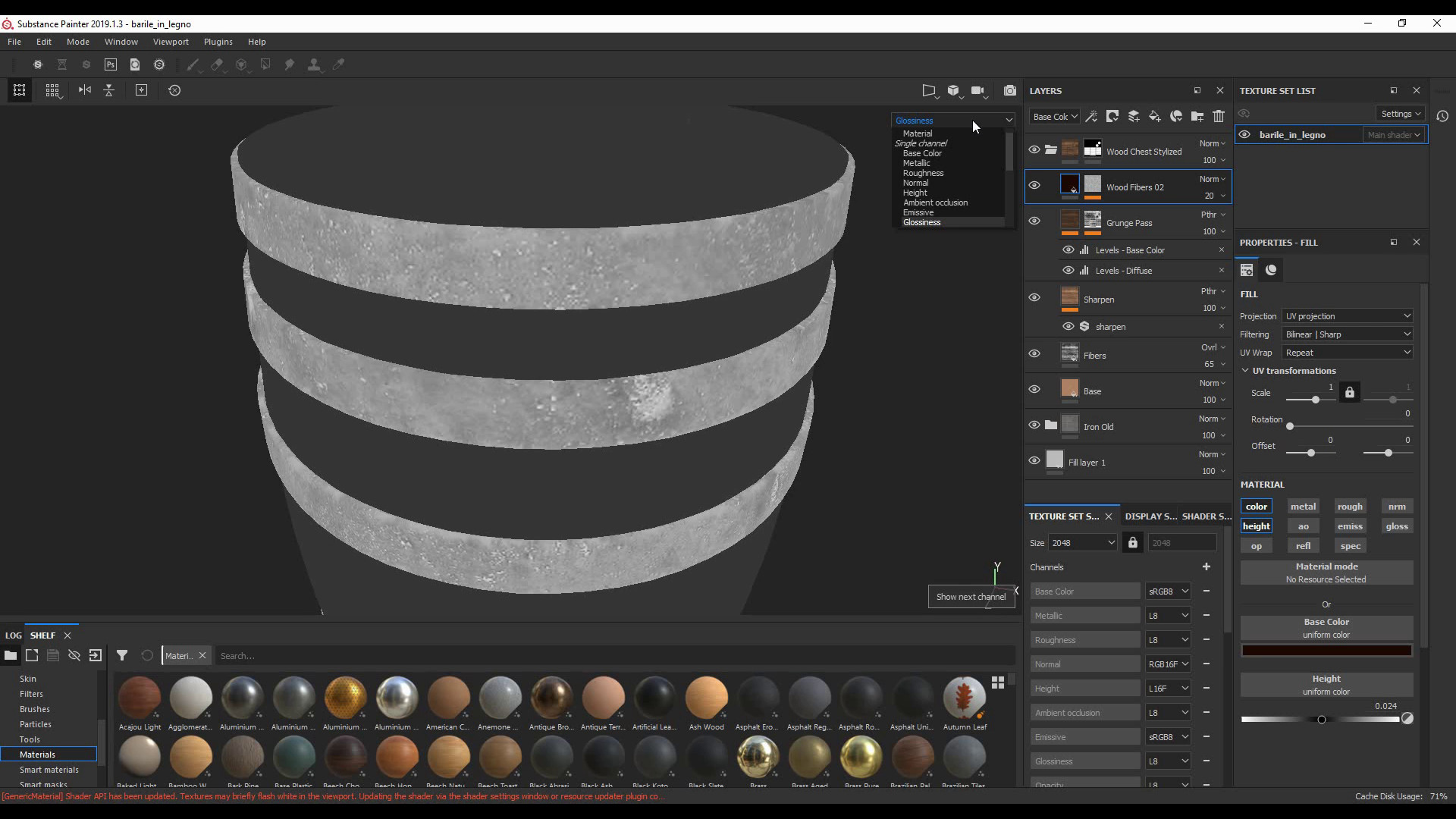 Let's start with the Metallic channel, which defines which parts of the Material are to be treated as metal and which are not, in particular by using a grayscale image, where white is used for a pure metal and black for a pure non-metal; in the case of the barrel we also have grays because the material used for the metal parts, "iron old", must represent - as the name suggests - the old, worn iron, perhaps with dust or rust that lower the "metallicity" of the surface.

The wooden parts, on the other hand, appear to be absolutely black, or rather not metallic, as it should be. 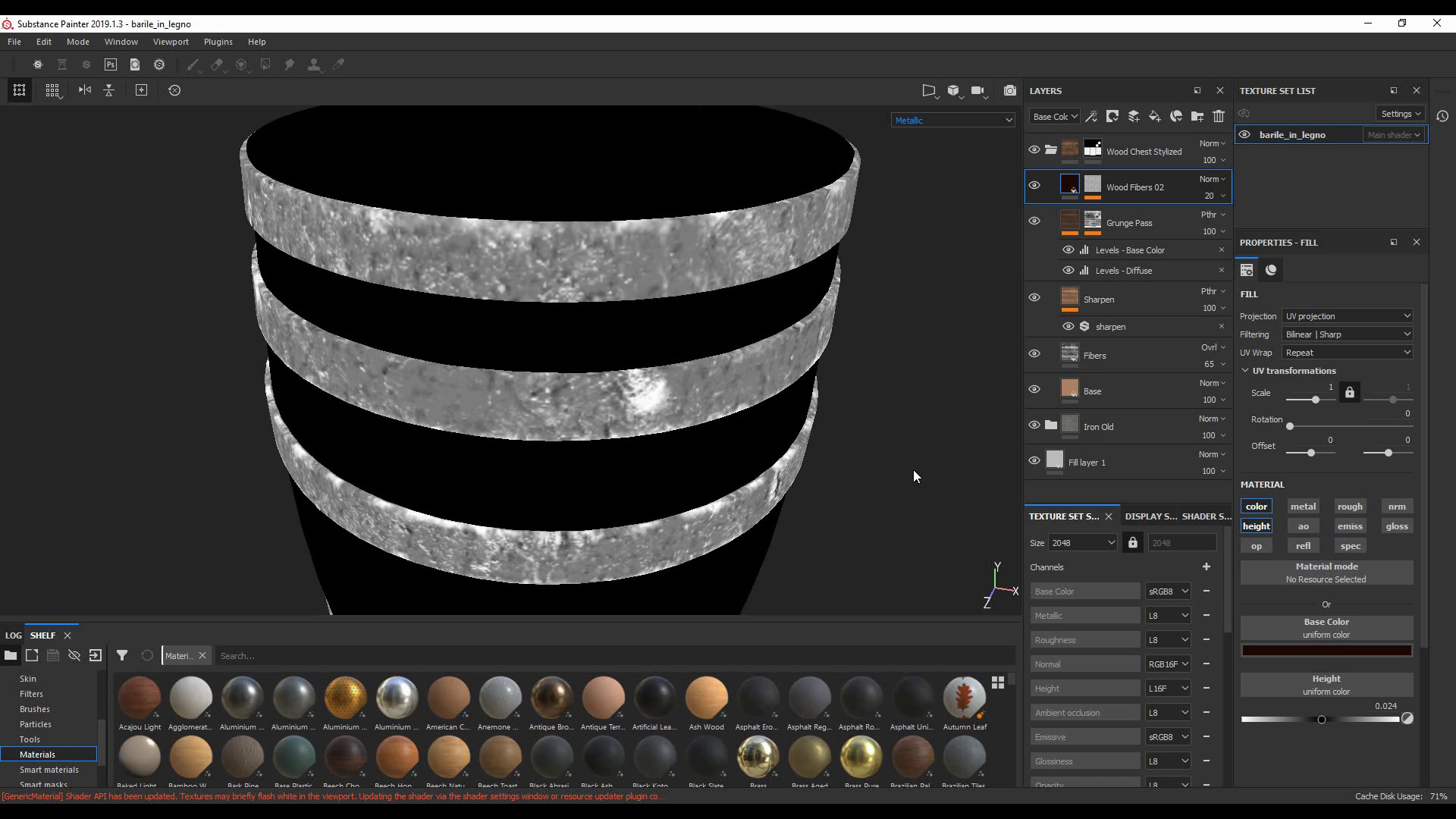 THE BASE COLOR CHANNEL

Let's move on to the second fundamental channel of the PBR: the Base Color.

As you can see, this information channel presents the basic color of the object through a Color Texture, without lighting or shading effects: these are "flat" Textures. 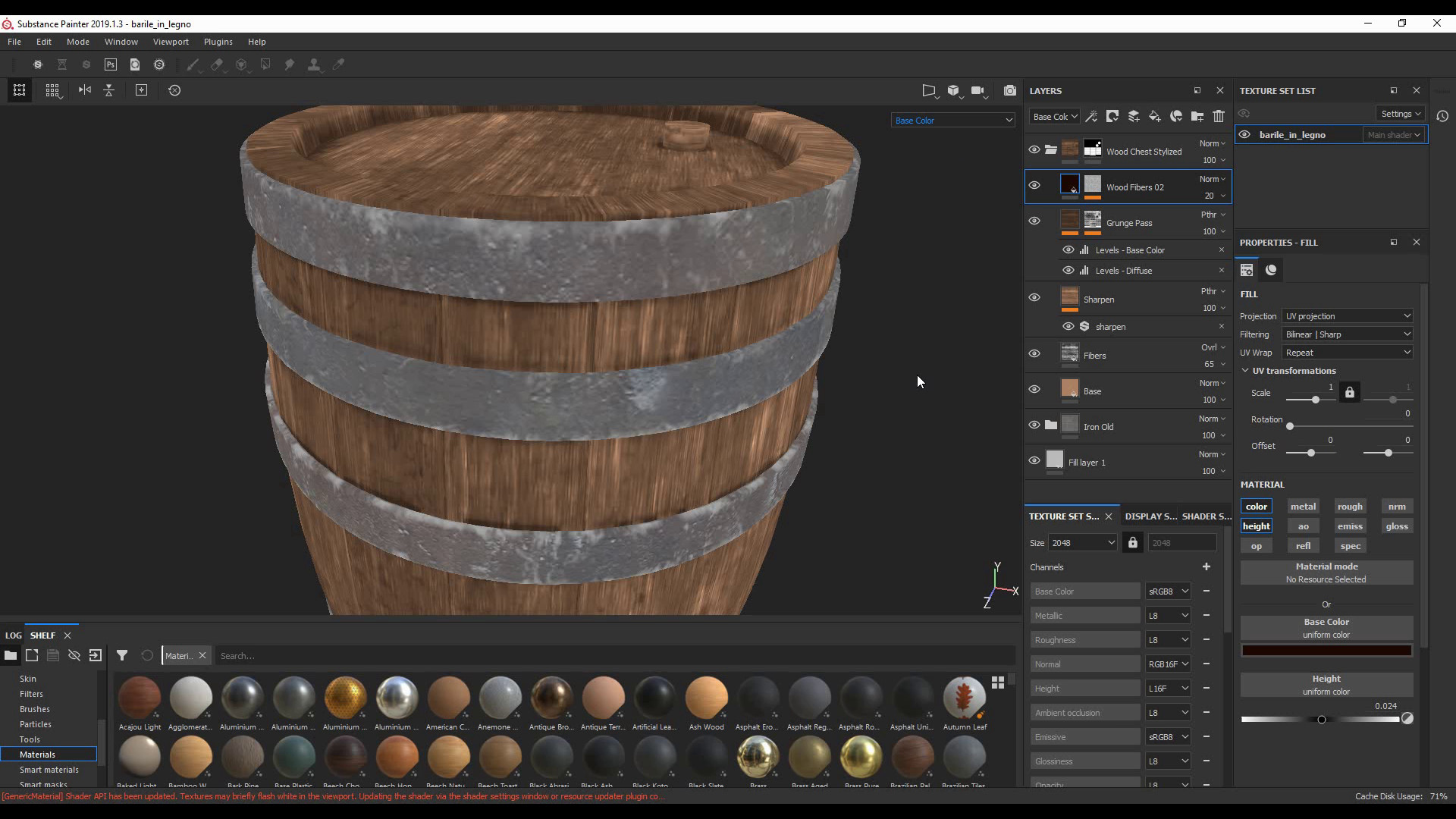 The colors of the metal parts and of the wooden parts have similar intensities: the color is different, it is true, but they do not seem so radically different, even if they belong to completely different substances ...

The reason is that the distinction, during the shading and rendering processes, is made by Substance using the Metallic channel (and its Texture), which tells Substance that the light reflections must be handled differently depending on whether they relate to a metallic or a non-metallic surface: the grays of the Base Color of the metal parts in fact define the intensity of the light reflections (and the color tint) to be given to these reflections.

The Iron Old material is a "dirty" material, so the effect is not appreciated much, but look at how things change, in the various channels and in the final result, if I insert an "Aluminum Pure" Material between the material of the wood and that of the metal and if I disable the Iron Old material below: 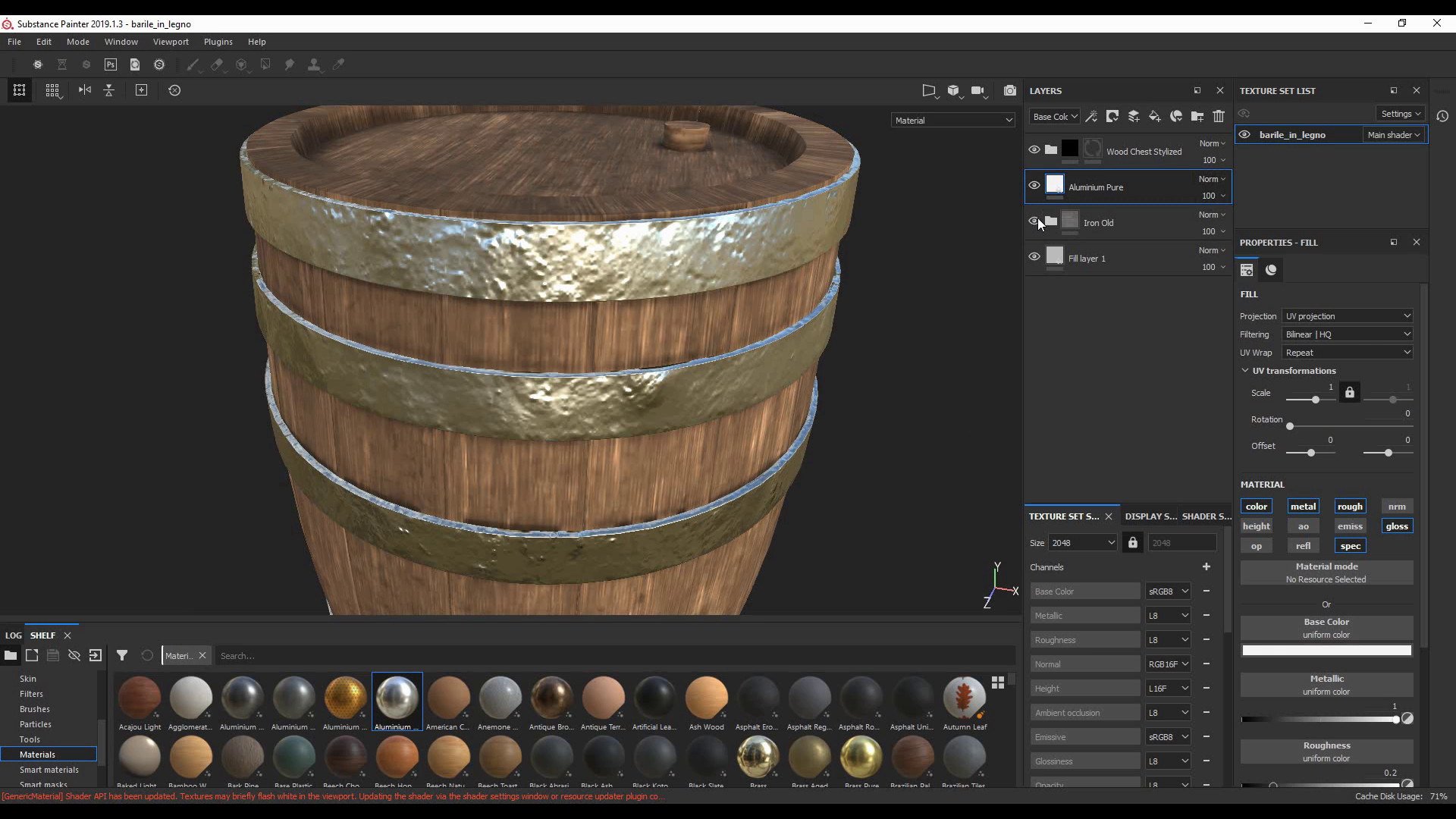 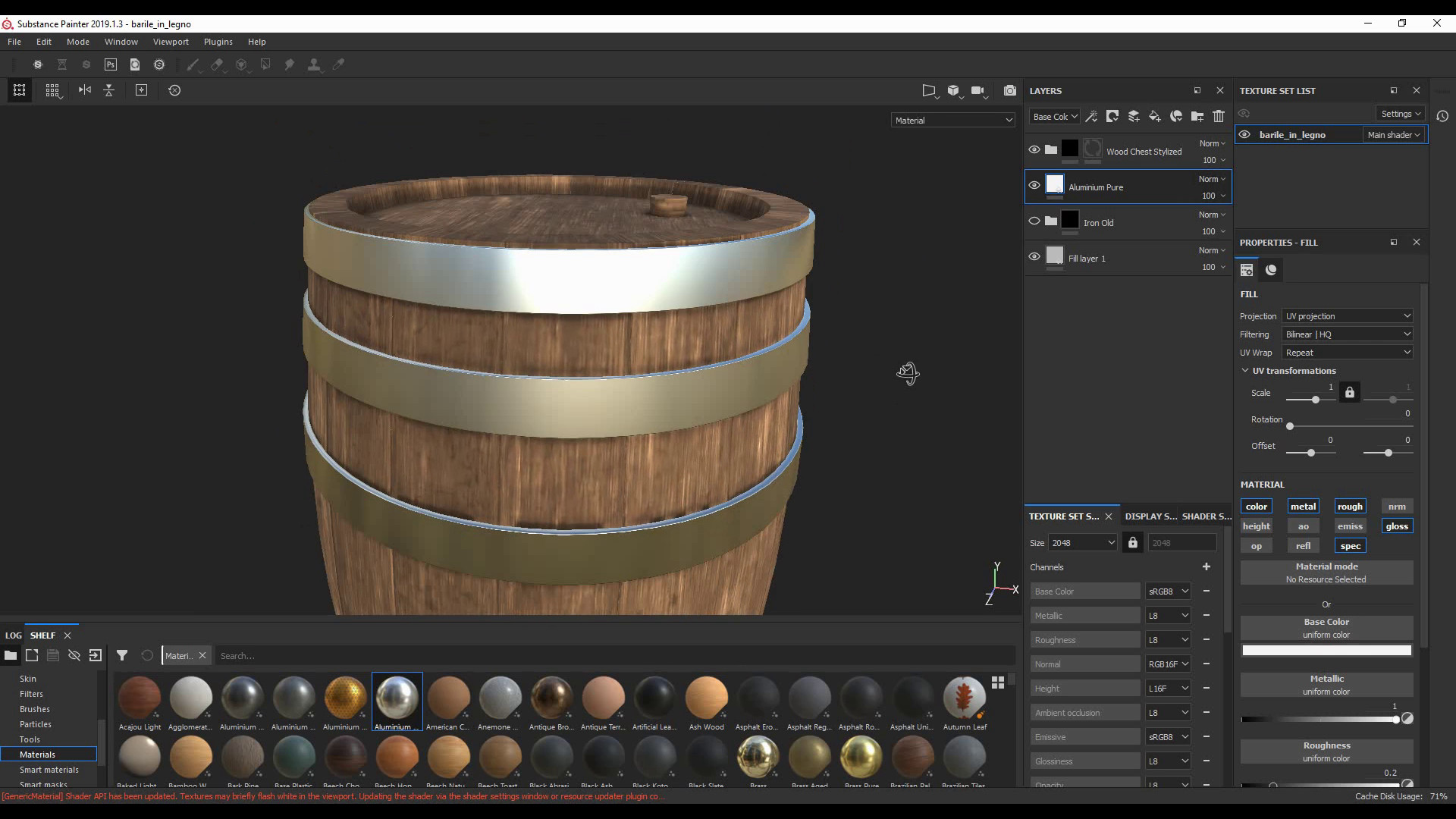 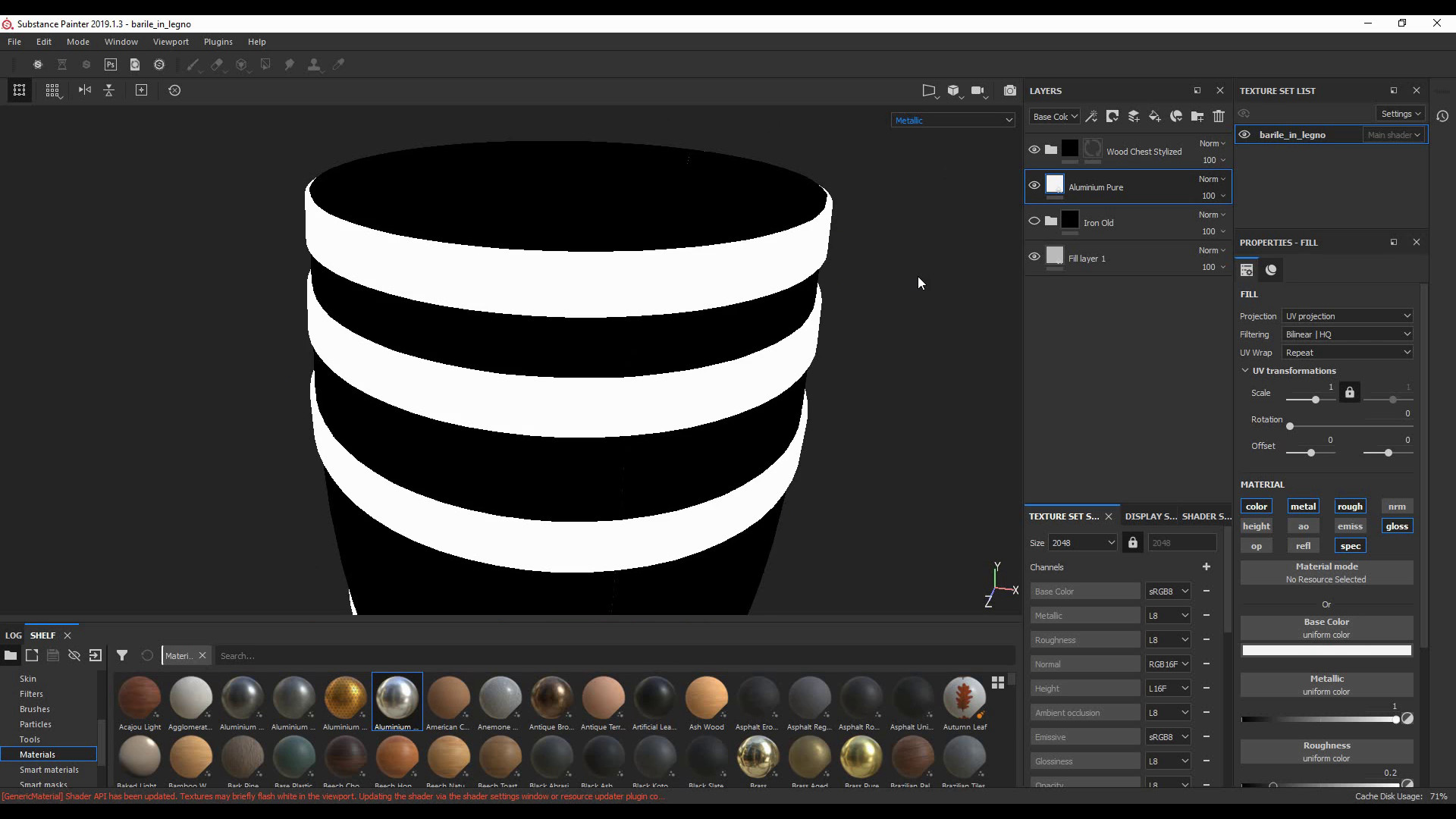 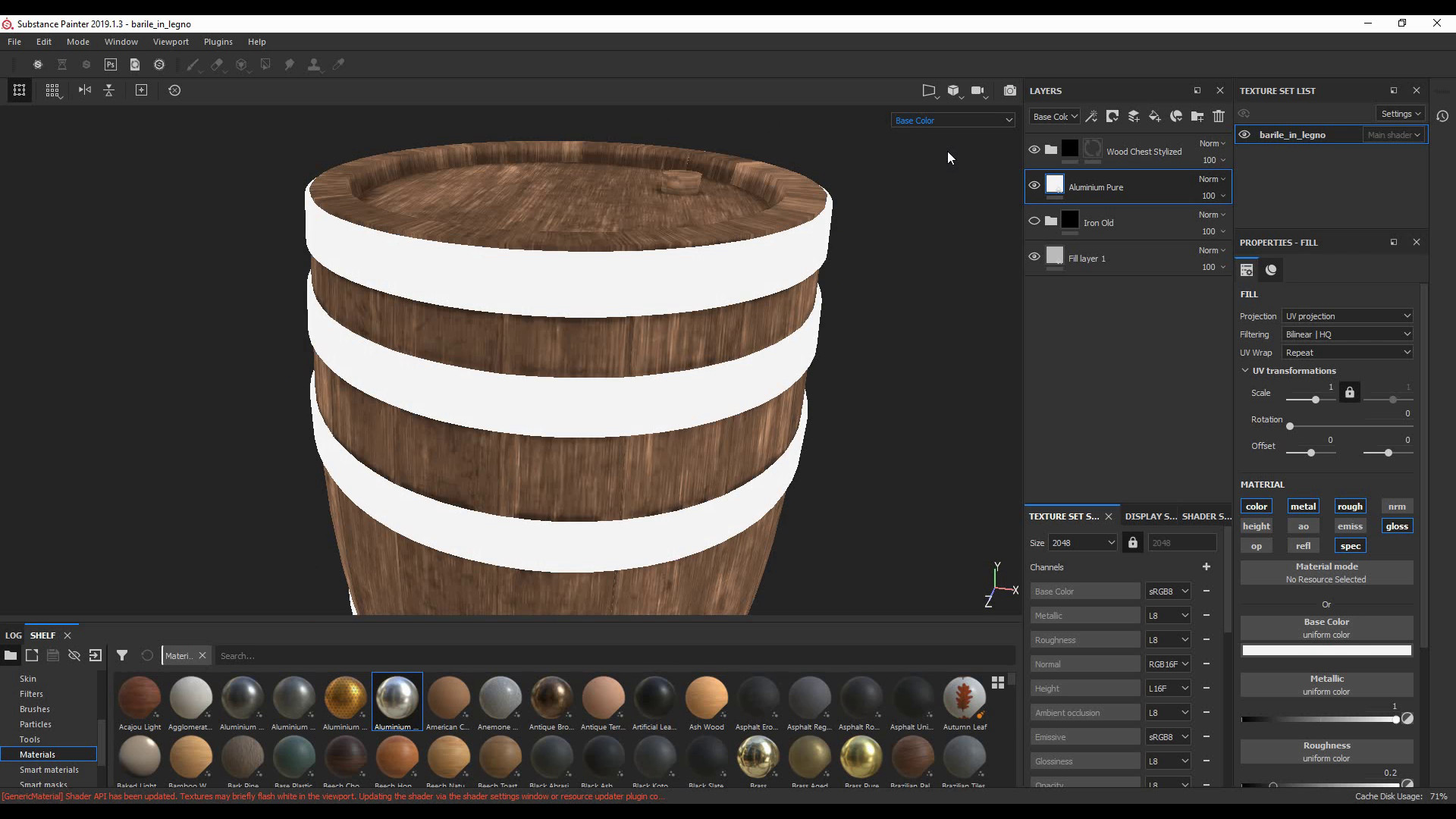 Now look at what happens bringing to zero the Metallic value in Aluminium Pure: the "bands" have turned white, they no longer reflect as before, they look like white plastic objects. 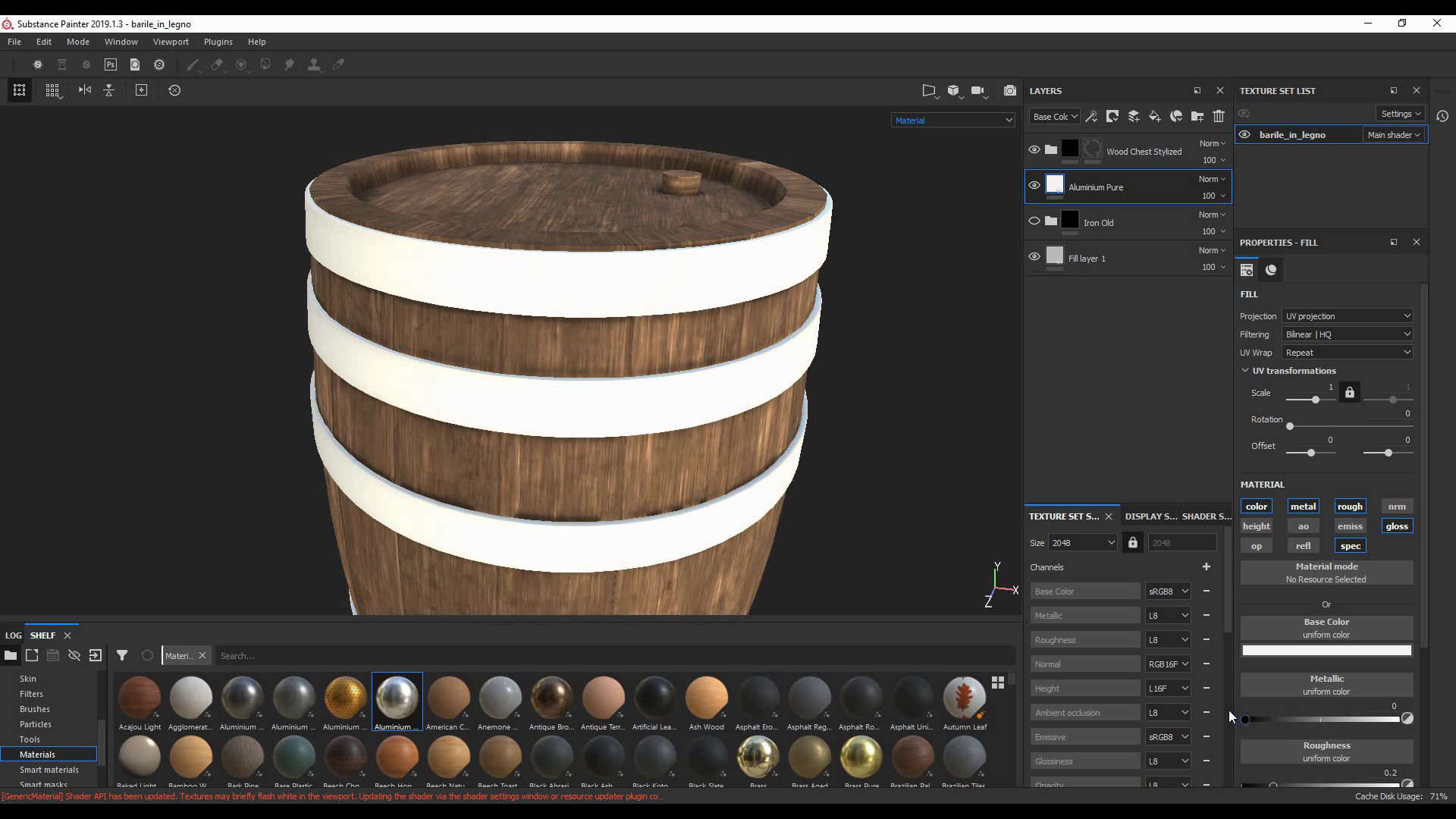 We now set Metallic to 1, but we lower the value of the Base Color: the bands maintain the typical "reflectivity" of the metal, but they become gradually darker. 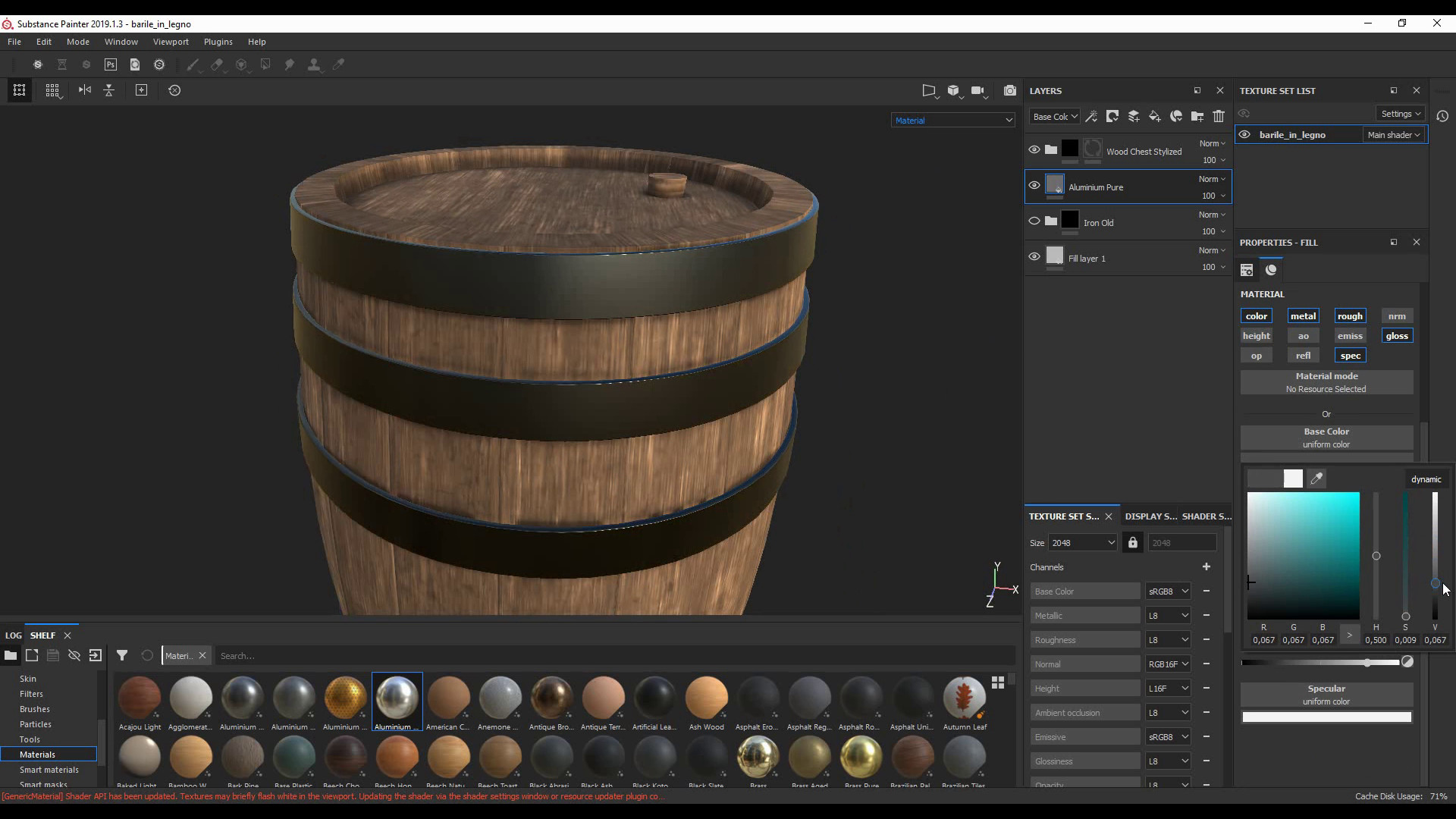 I'm keeping the Aluminum Pure material activated and Iron Old deactivated to show you the effects of the third fundamental channel of a Material: Roughness.

Roughness (which is the opposite of Glossiness), is represented, like the Metallic map, with a grayscale image, where white is the maximum roughness, while black represents a completely glossy, perfectly reflective surface; in fact, a perfect mirror is implemented in the PBR with a metallic material with pure white color and Roughness 0, as visible in the video right now. 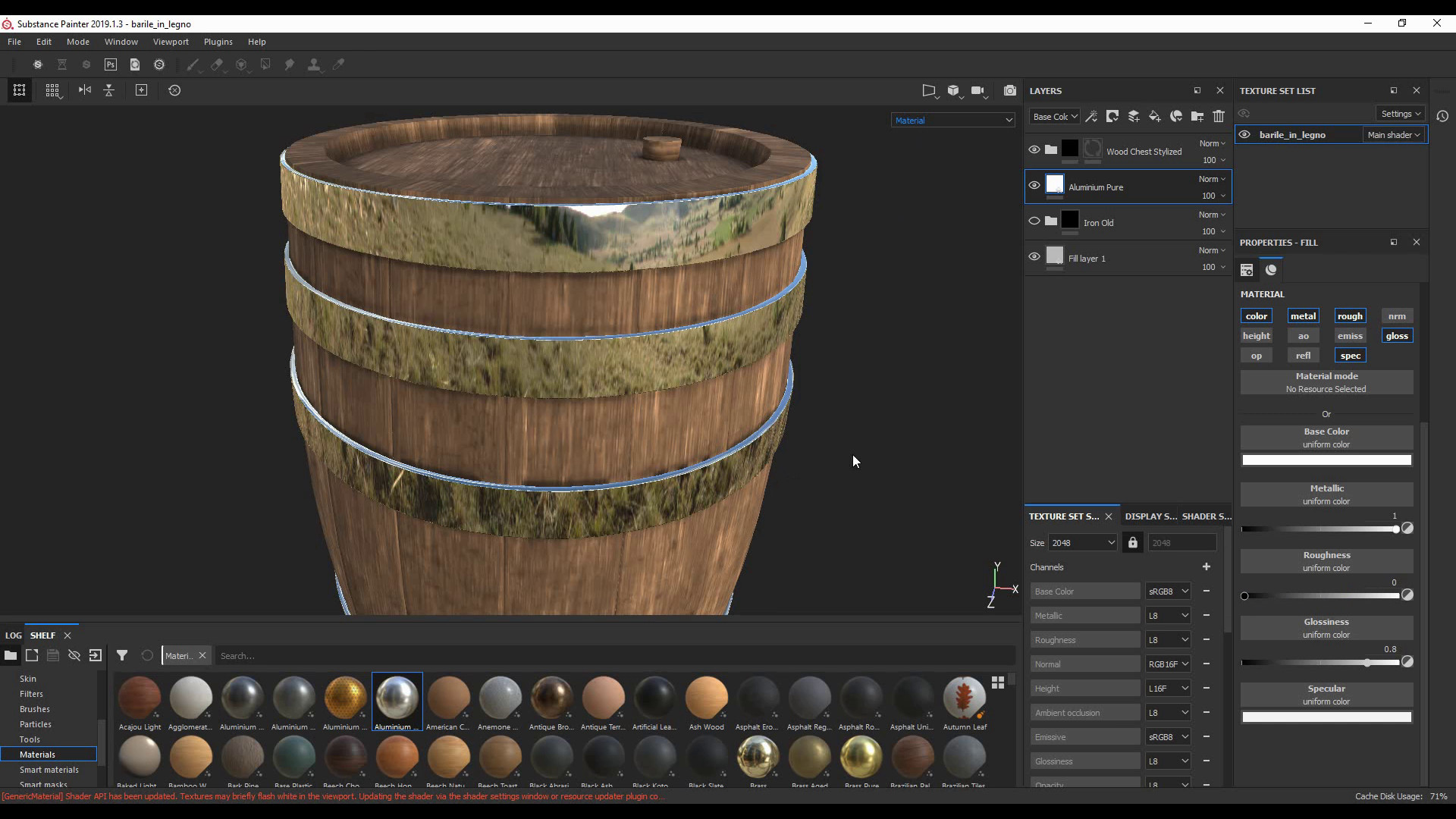 By increasing the Roughness value, we will make the surface less smooth and, therefore, this will make its reflections more "diffuse" (blurred). This applies to both metals and non-metals. 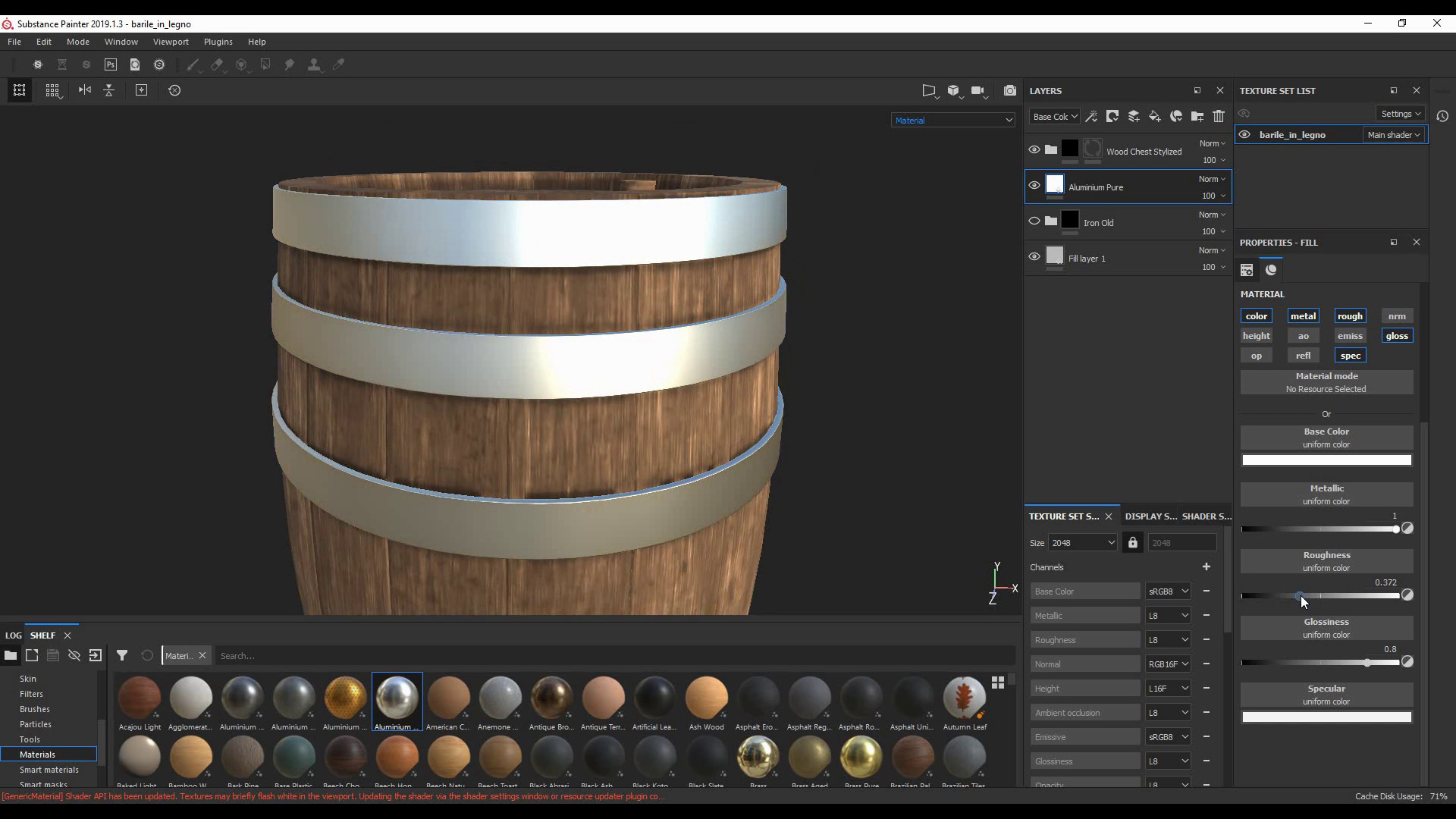 ADDITIONAL CHANNELS: NORMAL AND HEIGHT TO SIMULATE SOME DETAILS

Now I am removing the Aluminum Pure Material and I am activating Iron Old to go back to the original configuration of the project and take a look at some "extra" information that, in Computer Graphics, allows you to add details to the surfaces during the rendering process; that is, without having to physically model them on the geometries.

I select "Normal + Height + Mesh" from the selector at the top right of the 3D window.

This view shows the combination of multiple information channels which modify the simulated details on the surface of an object; without these details, the surfaces of the object would appear flat, not very credible, especially in the wooden parts. 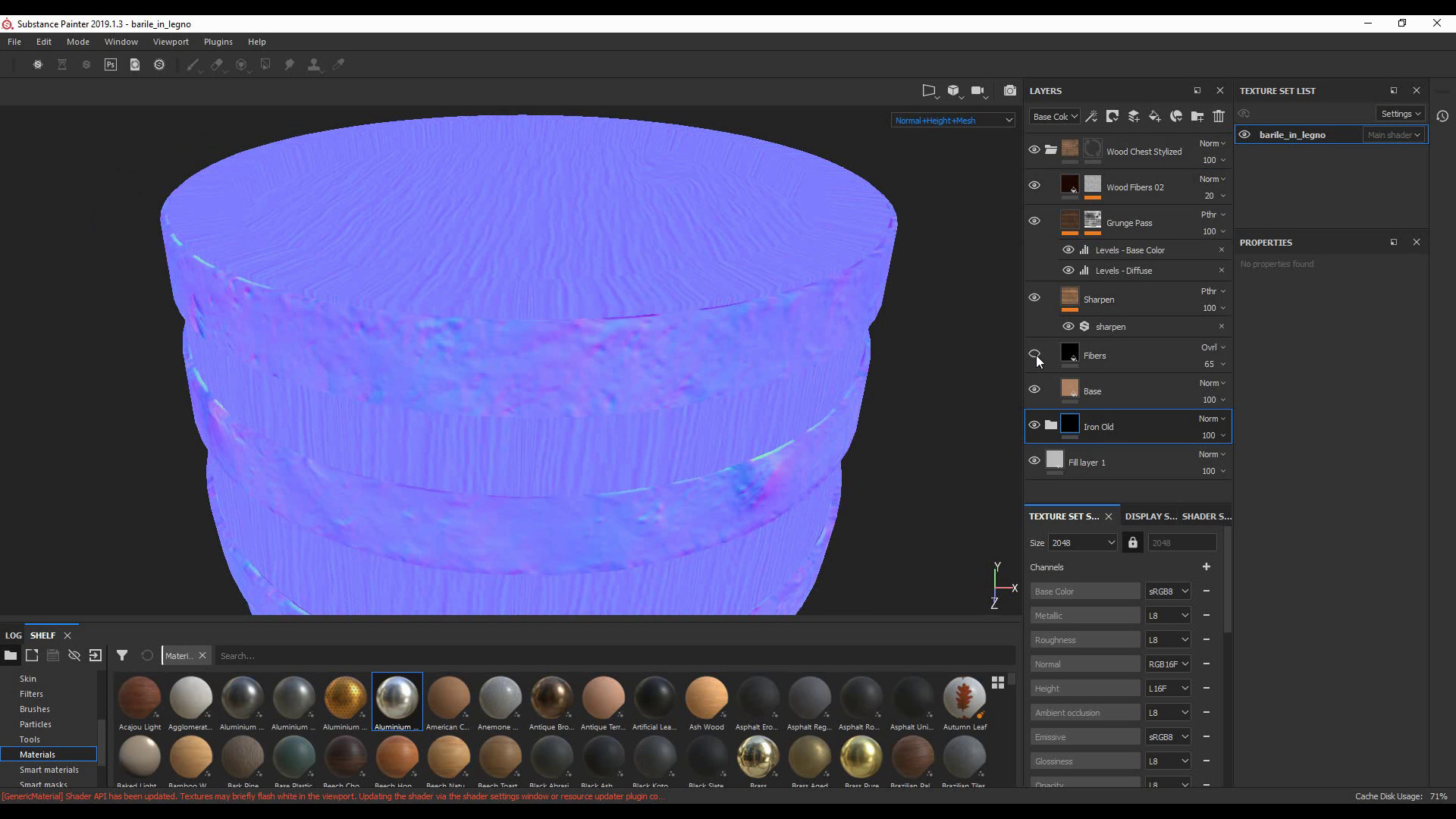 In particular, in the example that I am showing on the screen, the details of the surface are mainly implemented, in the wooden parts, by the "Fibers" Layer; to observe the differences in the appearance of the surface with and without that information, it is sufficient to disable those effects in the Layers tab, observing the differences both in "Normal + Height + Mesh" mode and in "Material" mode, in the 3D View. 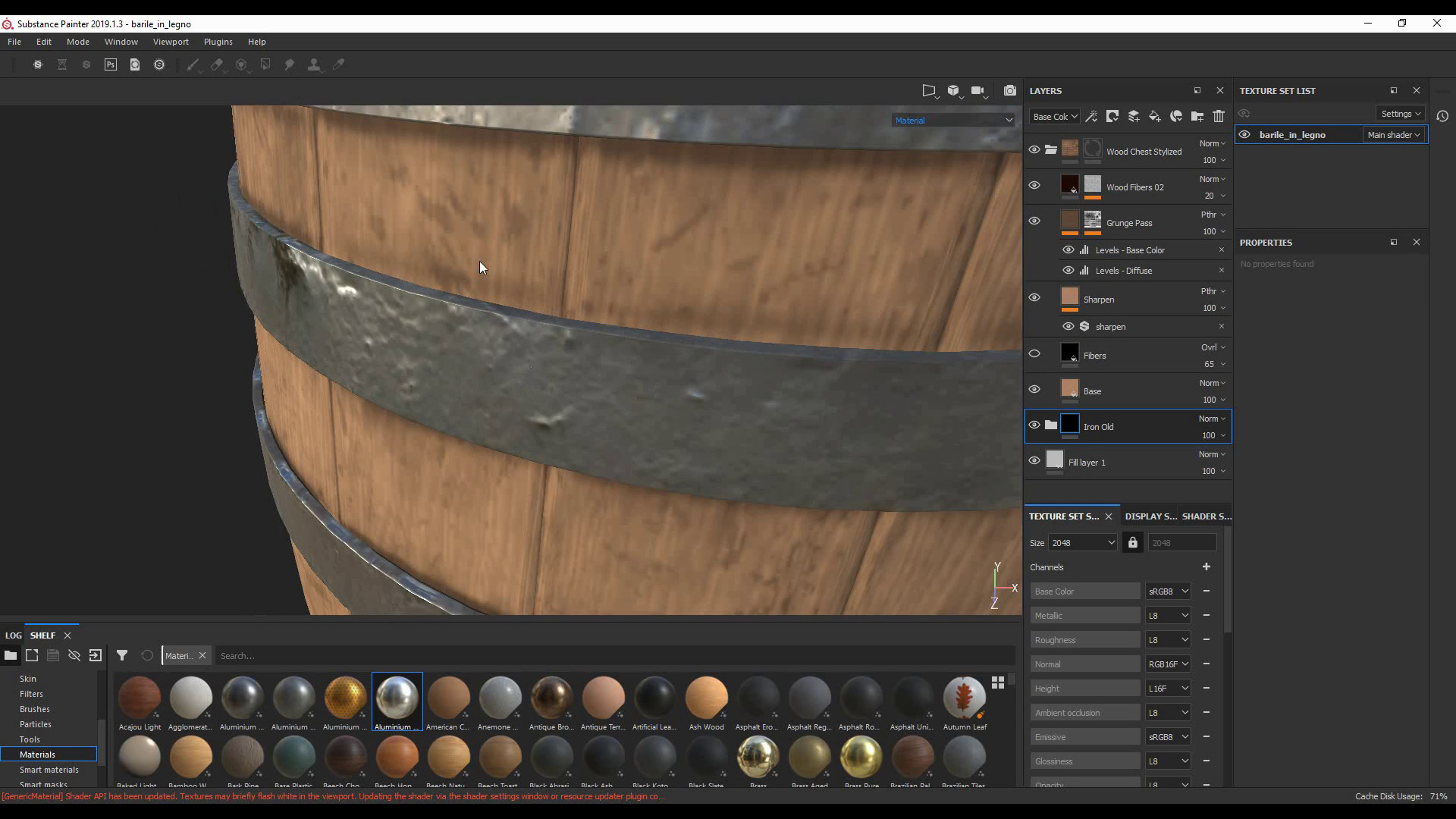 The differences become more evident if the object is illuminated with "oblique" lighting, rather than frontal. 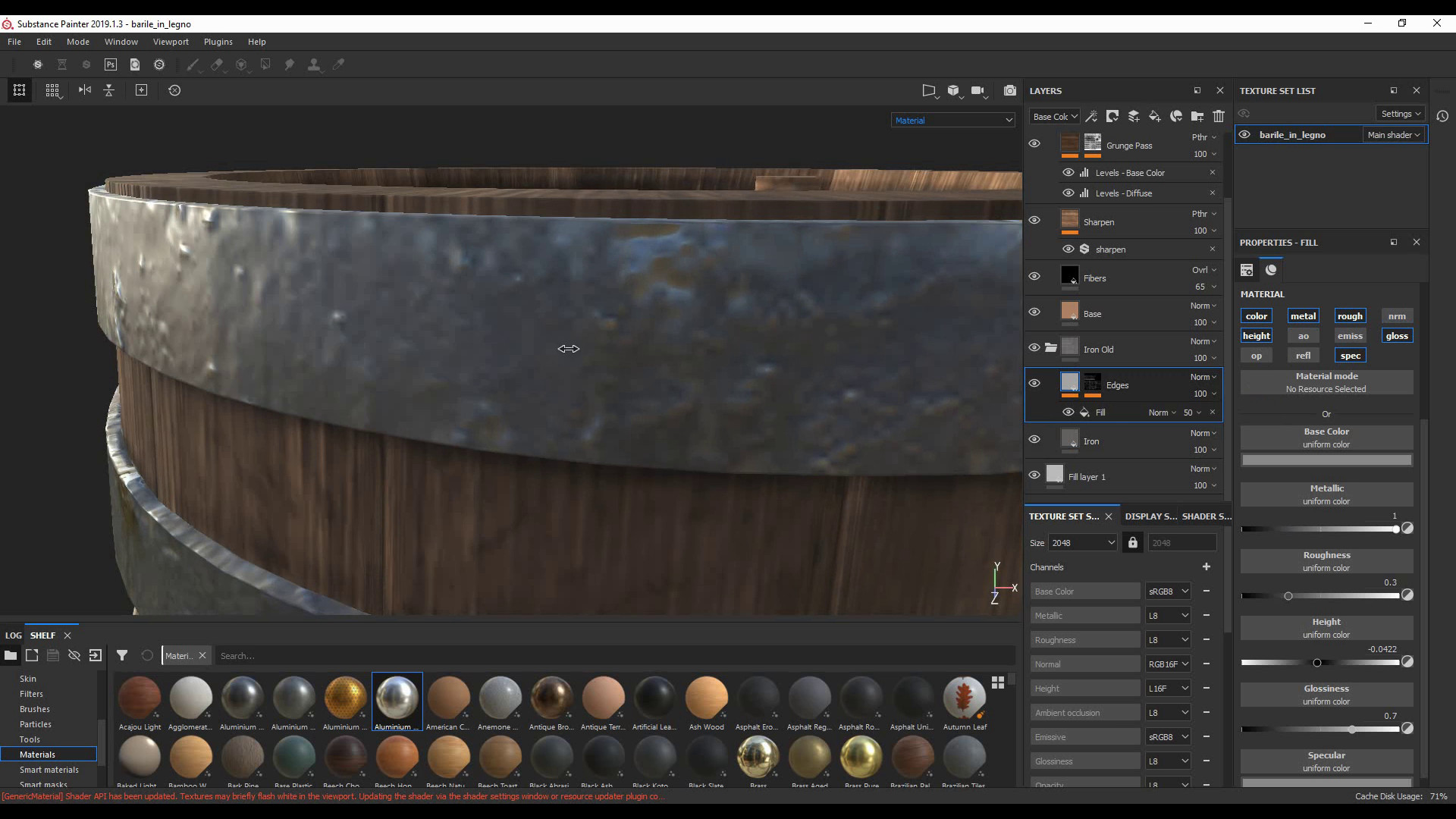 This effects there are also in the metal parts, in the “Iron” and “Edges” layers of the “Iron Old” Material.

Well, for this introductory tutorial on the basics of PBR in Substance Painter, we stop here; I hope you found it interesting and useful.