ATTENTION --- This section of the site is no longer updated: starting from May 1, 2021, the new videotutorials (of any category) are no longer published on this site, but only on the Youtube channel (in English, with subtitles). Subscribe to the channel and activate notifications to keep up to date on new tutorials and articles. 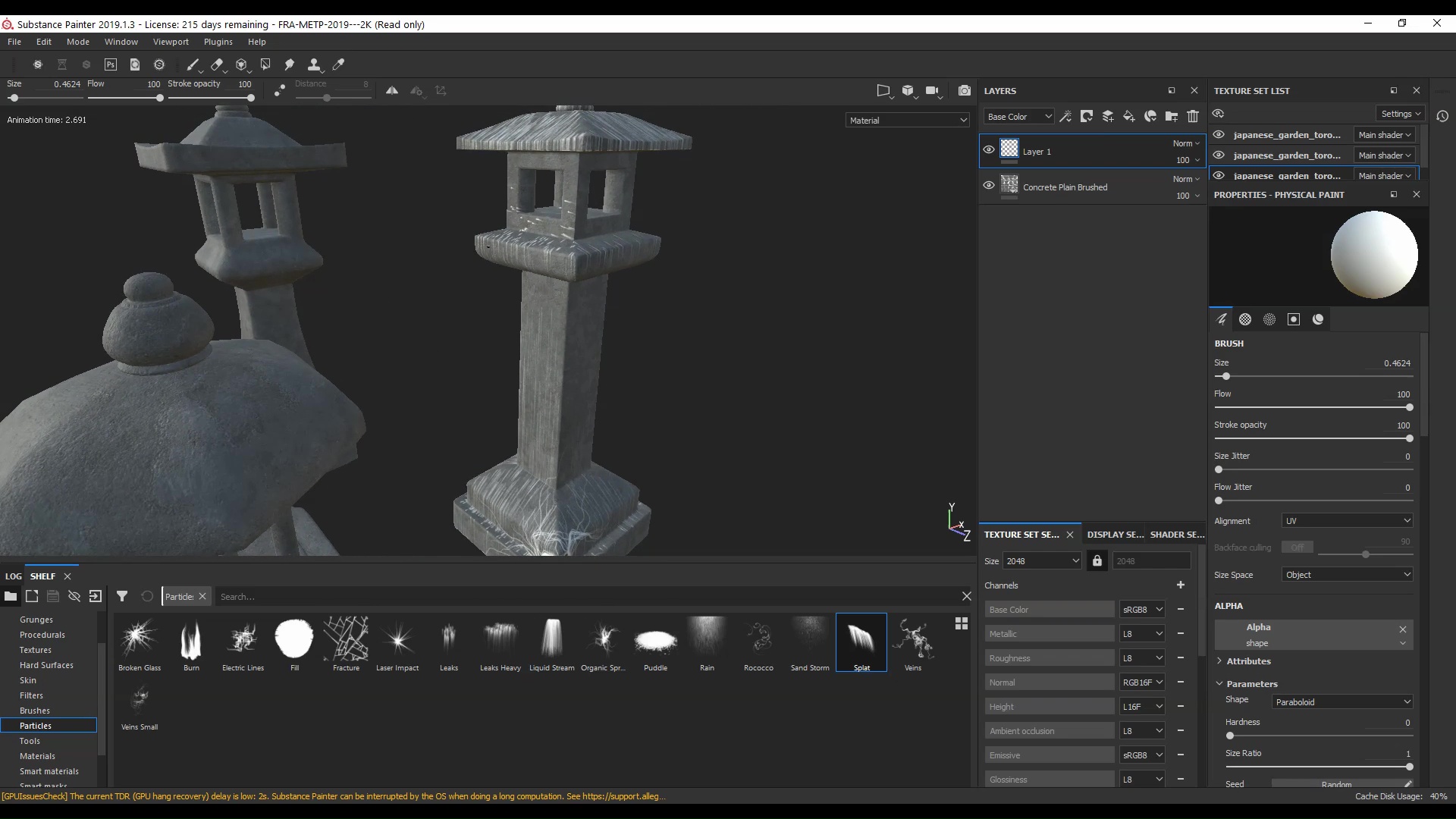 Particles (or "particle brushes", in a certain sense) are special tools that allow you to draw brush strokes on objects, creating drawings that, as you will see, have a life of their own, in the sense that - starting from the brushstroke given with a click mouse - other automatic brush strokes are generated, which follow an algorithm (that of the particle); for this reason, these tools are also called procedural: because they follow rules and can be modified with parameters. 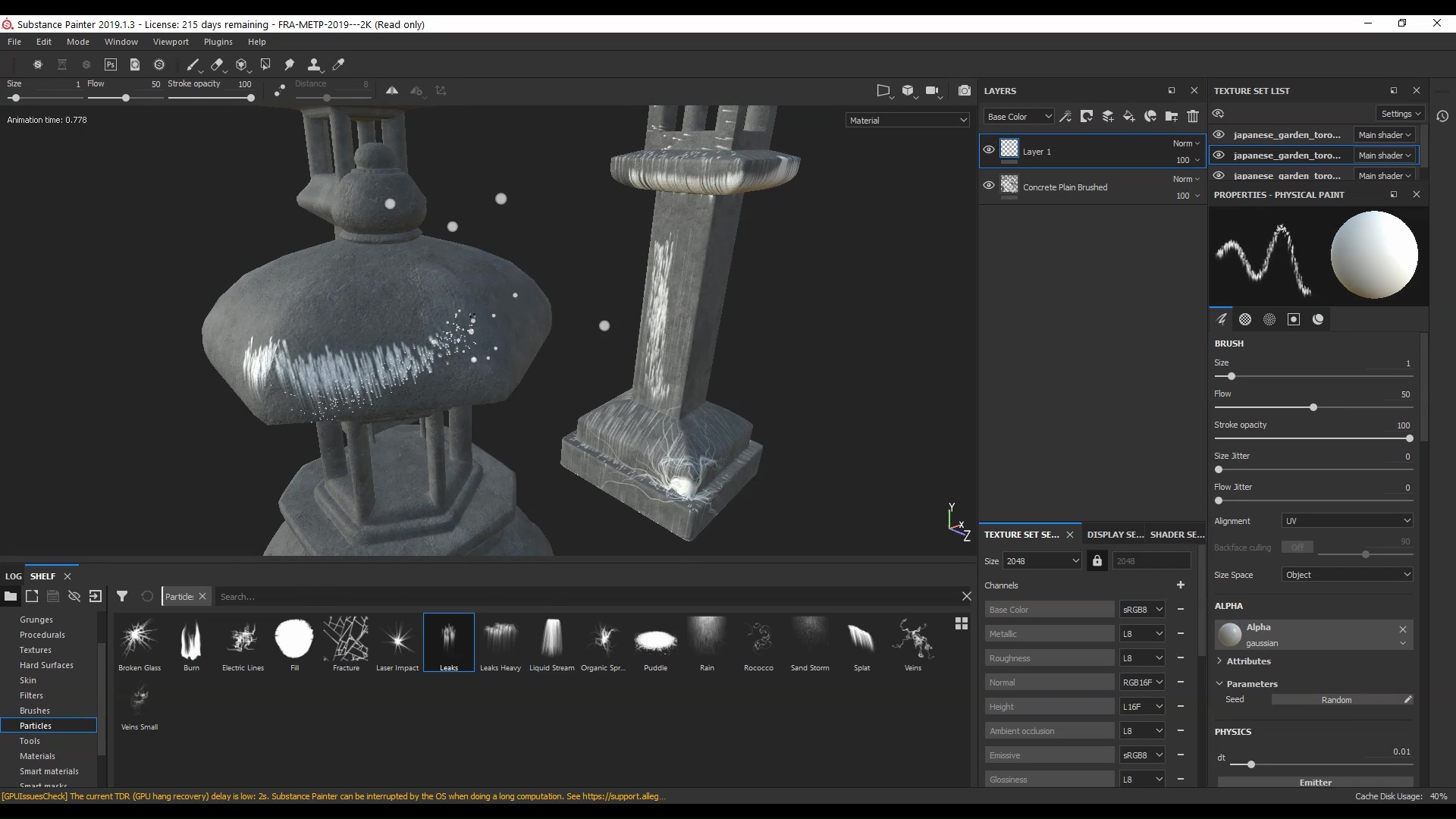 The algorithm of the particle determines, for example, how many strokes must be generated by the main particle (often recursively, in the sense that the child strokes can generate others in turn), with what degree of dispersion, with what maximum length, etc. 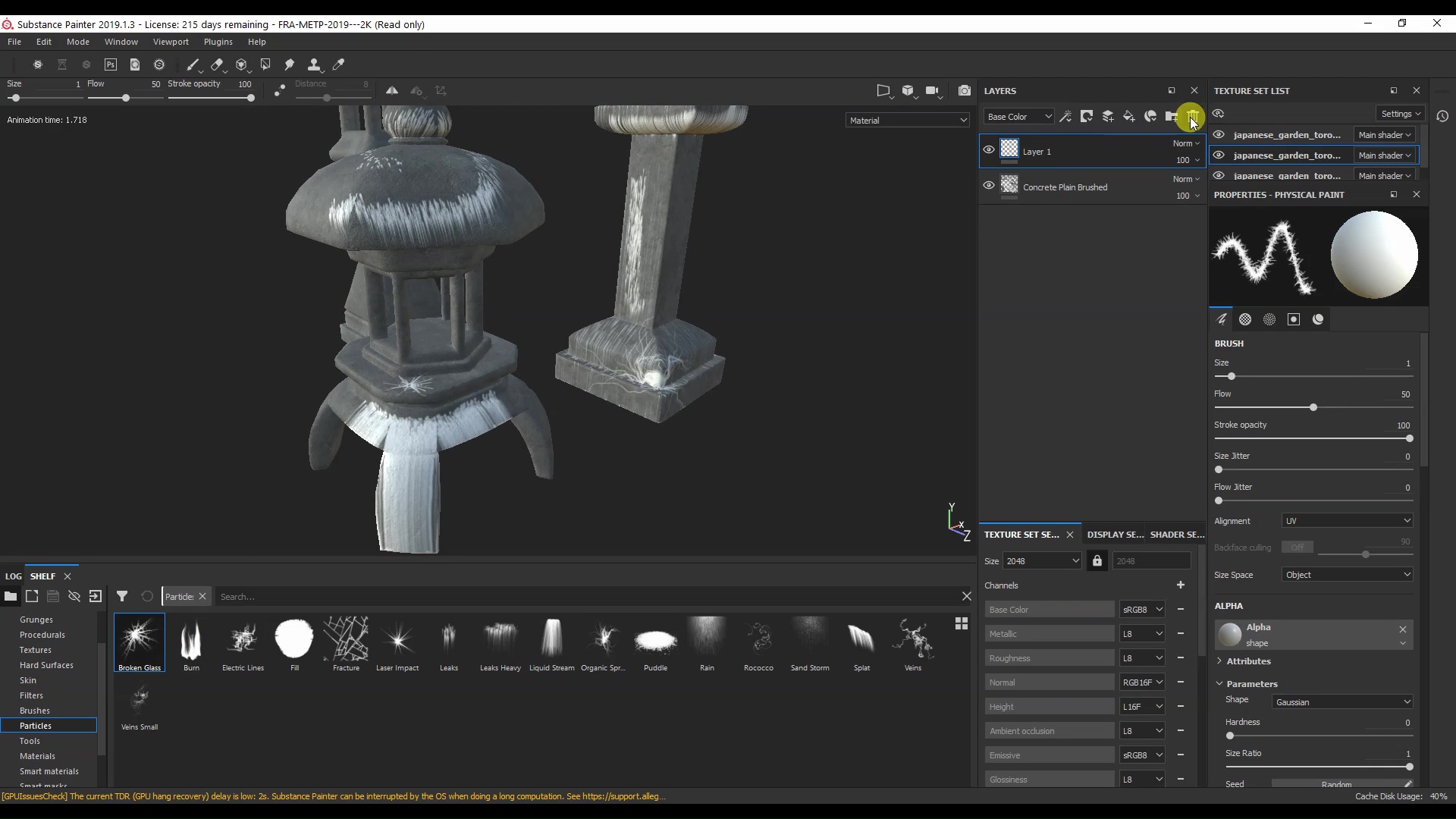 The most interesting aspect of these parameters of the various algorithms is that they can be customized extensively in the Brush tab, so we can start from a default setting (a “preset”) and modify it to obtain a different effect, more suited to our purposes. 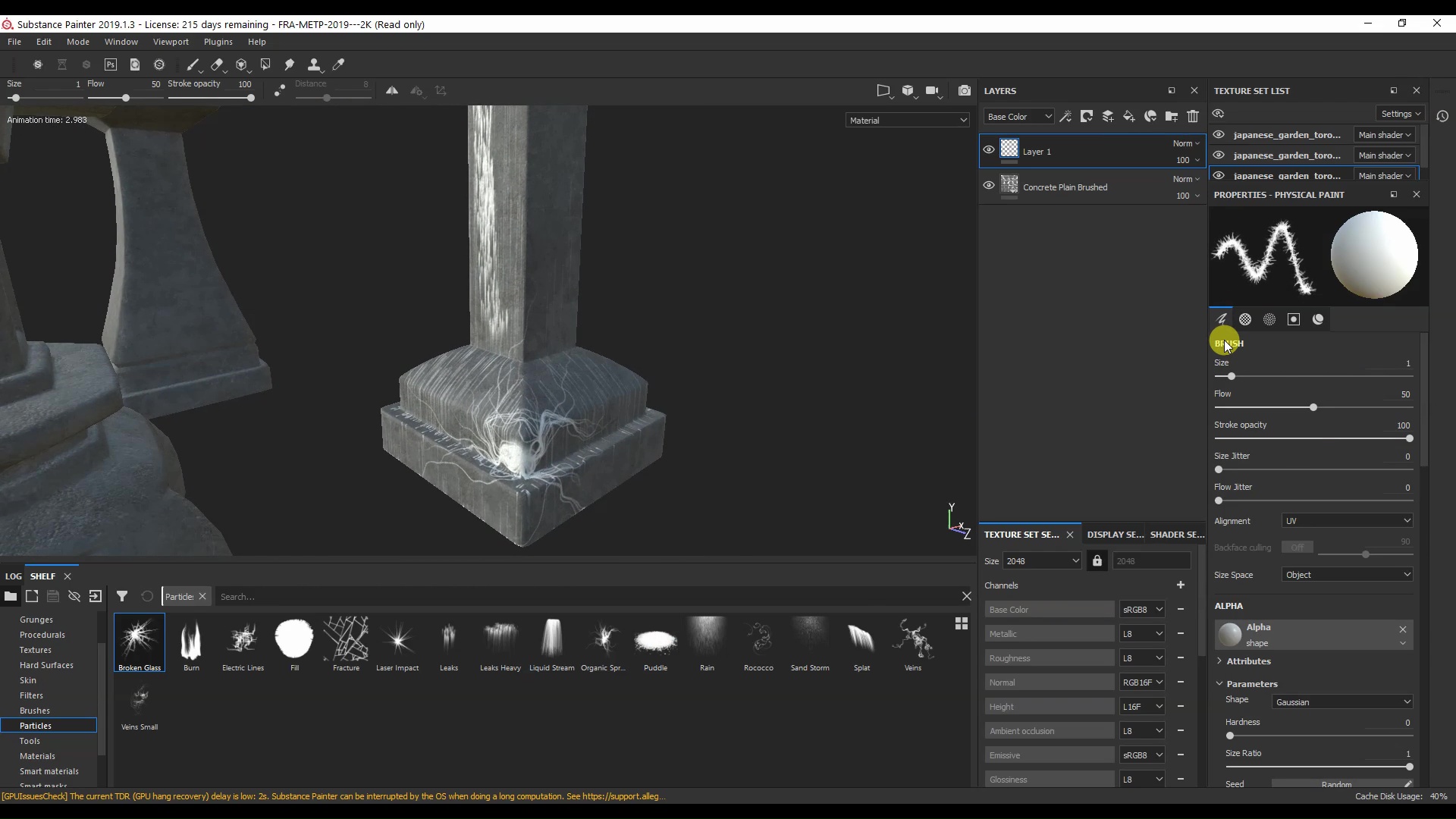 While I was talking, on the screen I played a bit with Particles brushes to show you on the fly how these tools are able to automatically generate very interesting effects, difficult to obtain with manual brushstrokes (with the "Brushes" of Substance) ; now, however, I will show you a concrete example.

In the scene I am using there are three objects (three “toro”, the traditional Japanese lanterns), each of which is provided with its own base material (“Concrete Plain Brushed”, with Tri-Planar and Scale mapping set to 2). 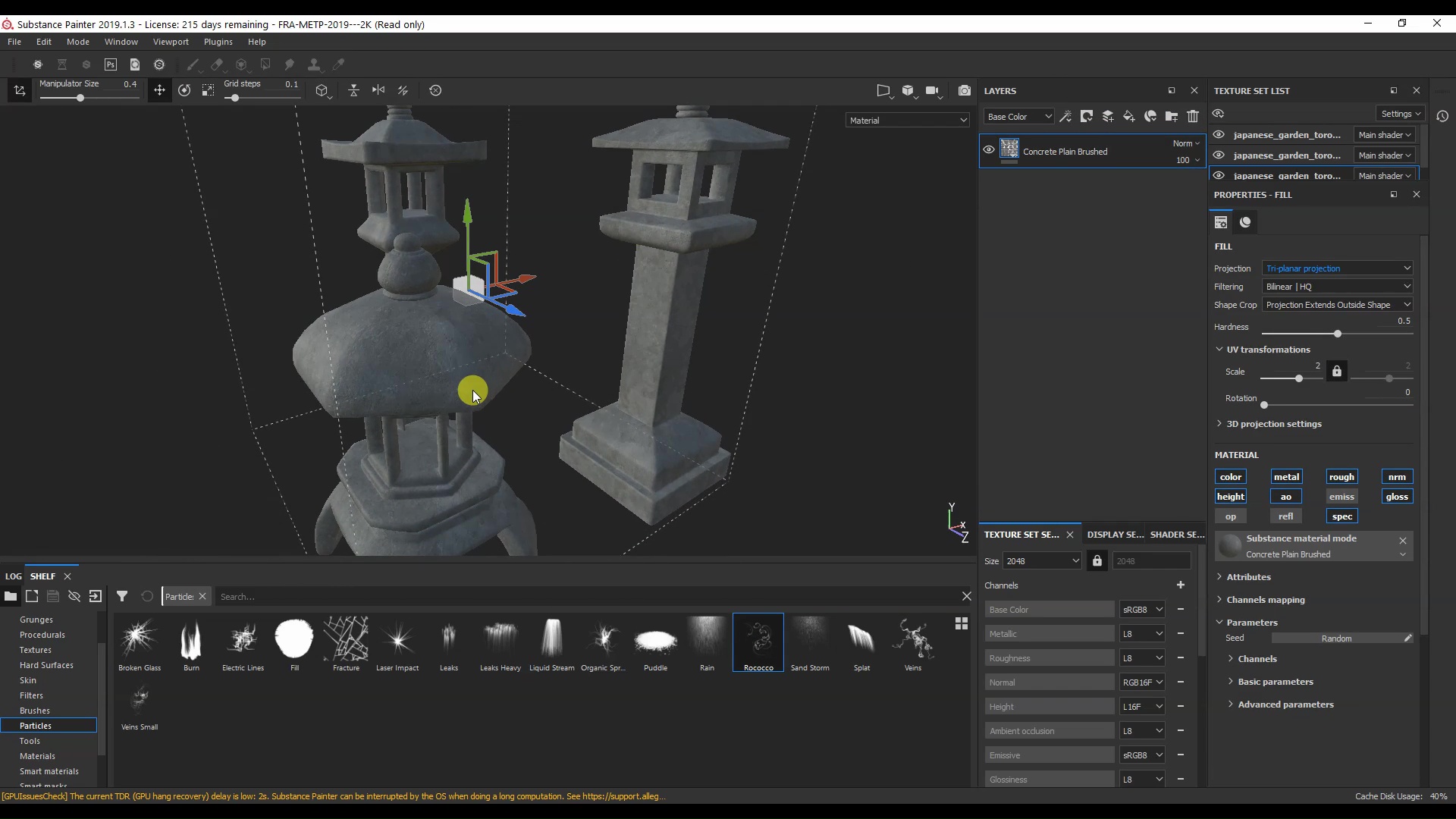 The appearance of the lanterns is too "clean": I want to add some moss, for example at the base and along some edges, so I add a material (in my case, "Pitch Grass Painted"), placing it on top of the material “Concrete Plain Brushed” in the Layers tab of one of the three objects. 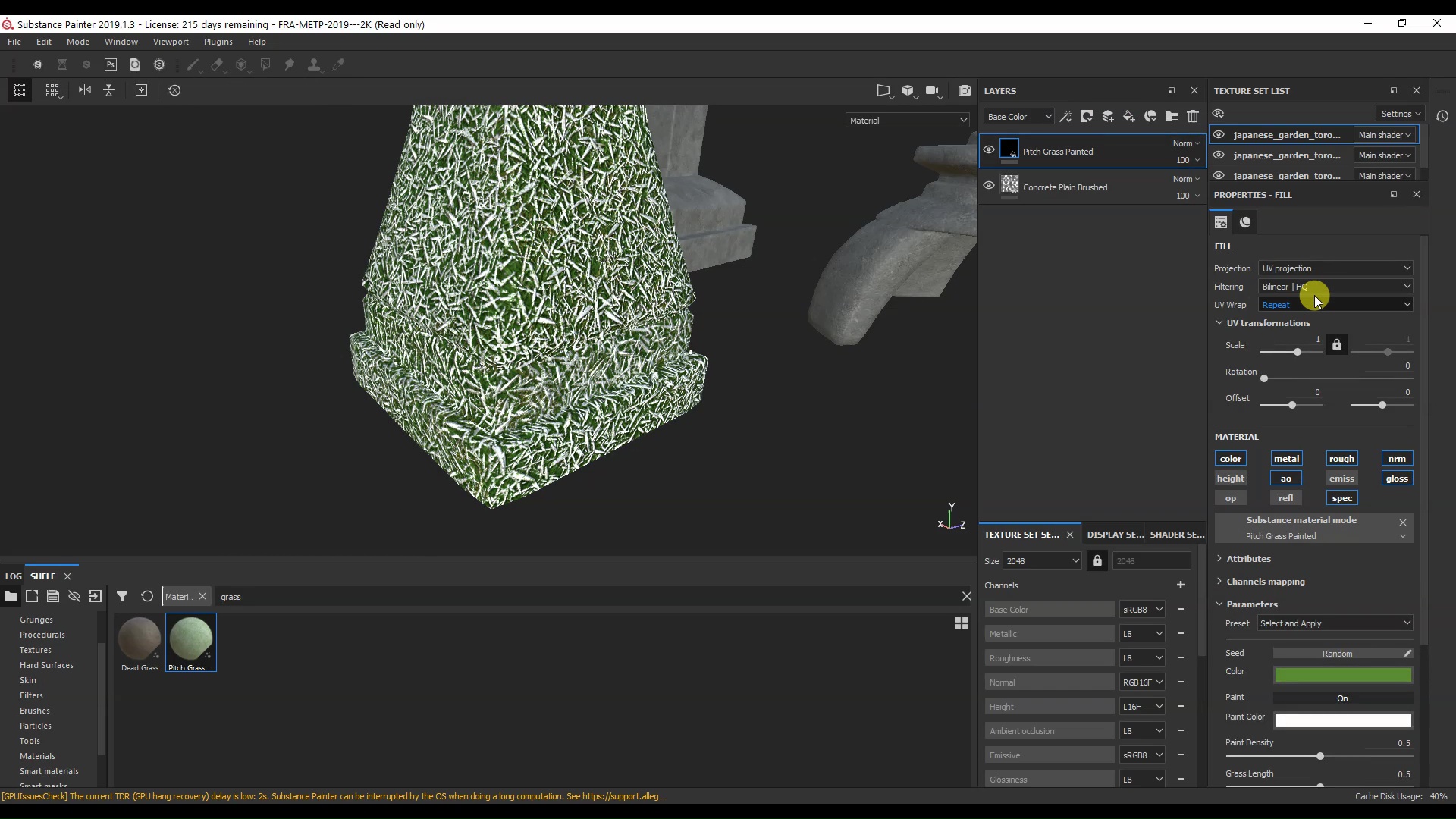 The new material will completely cover the one below, so we need to give it a layer mask to tell it which parts to act on; first, however, I modify it a little, because the scale and the colors are not suitable for the object: I change the Scale to 5 or 7, I darken the base color a little and, above all, I change the “Paint Color” to light green. By default, the Height channel of this material is disabled; I can choose whether to activate it and adjust the intensity of the reliefs by varying the value of the "Height Range" parameter, in the "Technical Parameters" section of the material. 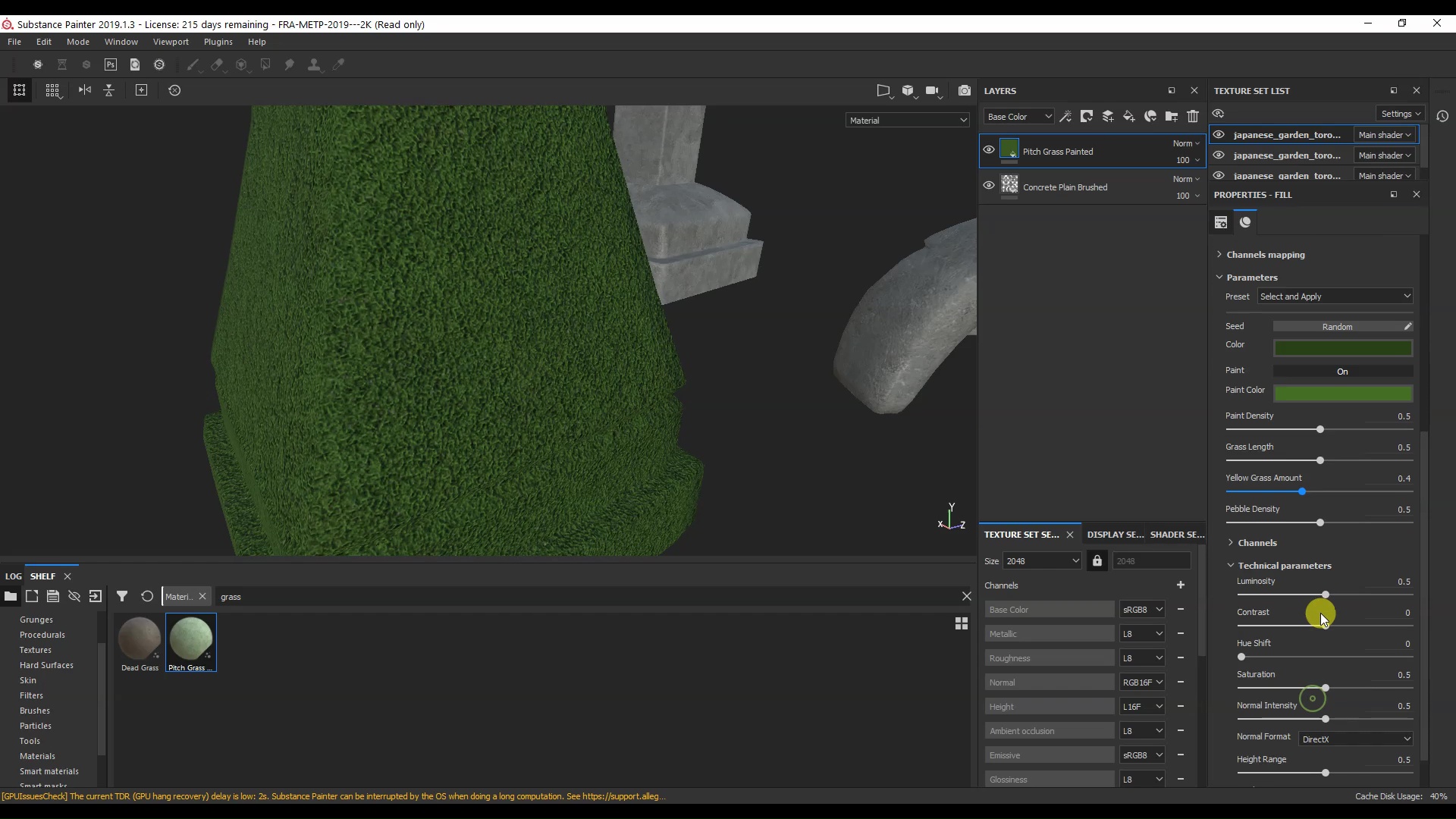 The material for the moss effect is there, but now we have to limit it only to certain areas; to do this, we add a black layer mask to the Material, so that we can specify the areas of influence with a brush ...

… but, this time, we click on the Particles section of the Shelf, instead of on the Brushes section. 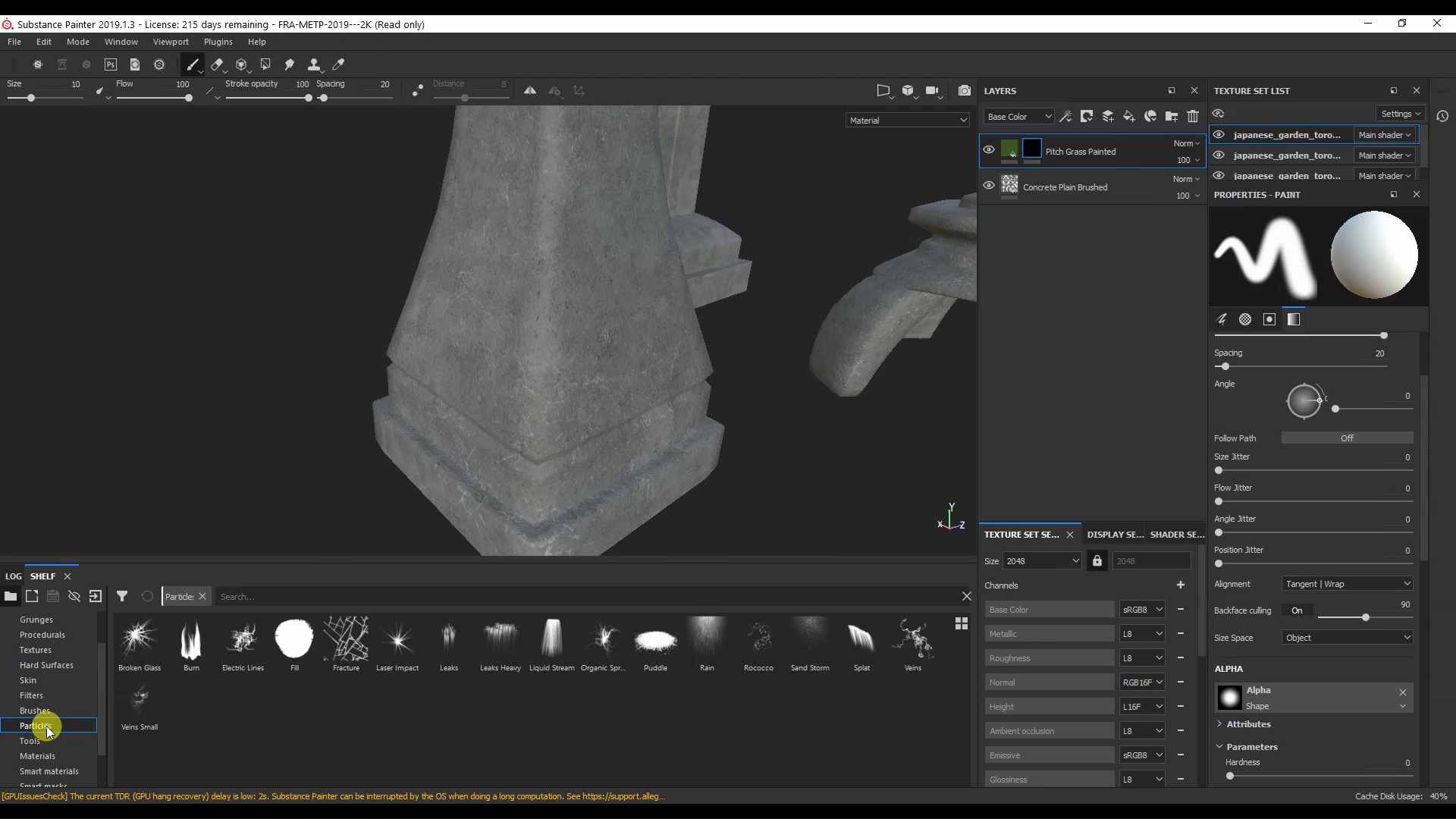 The particle brushes supplied as standard with Substance Painter are not many, but they have intuitive names and allow you to obtain a fair range of effects; moreover, as mentioned previously, each of them provides various parameters, which allow you to customize them (at least a little).

At a glance (also taking a look at the animated preview of each Particle brush, in the "Properties - Physical Paint" tab), the brush that can do for us is "Organic Spread", because - as the name suggests - generates secondary brushstrokes, starting from the point on which you click, which should have an organic dispersion... , in fact, like the one we would expect from a natural element. 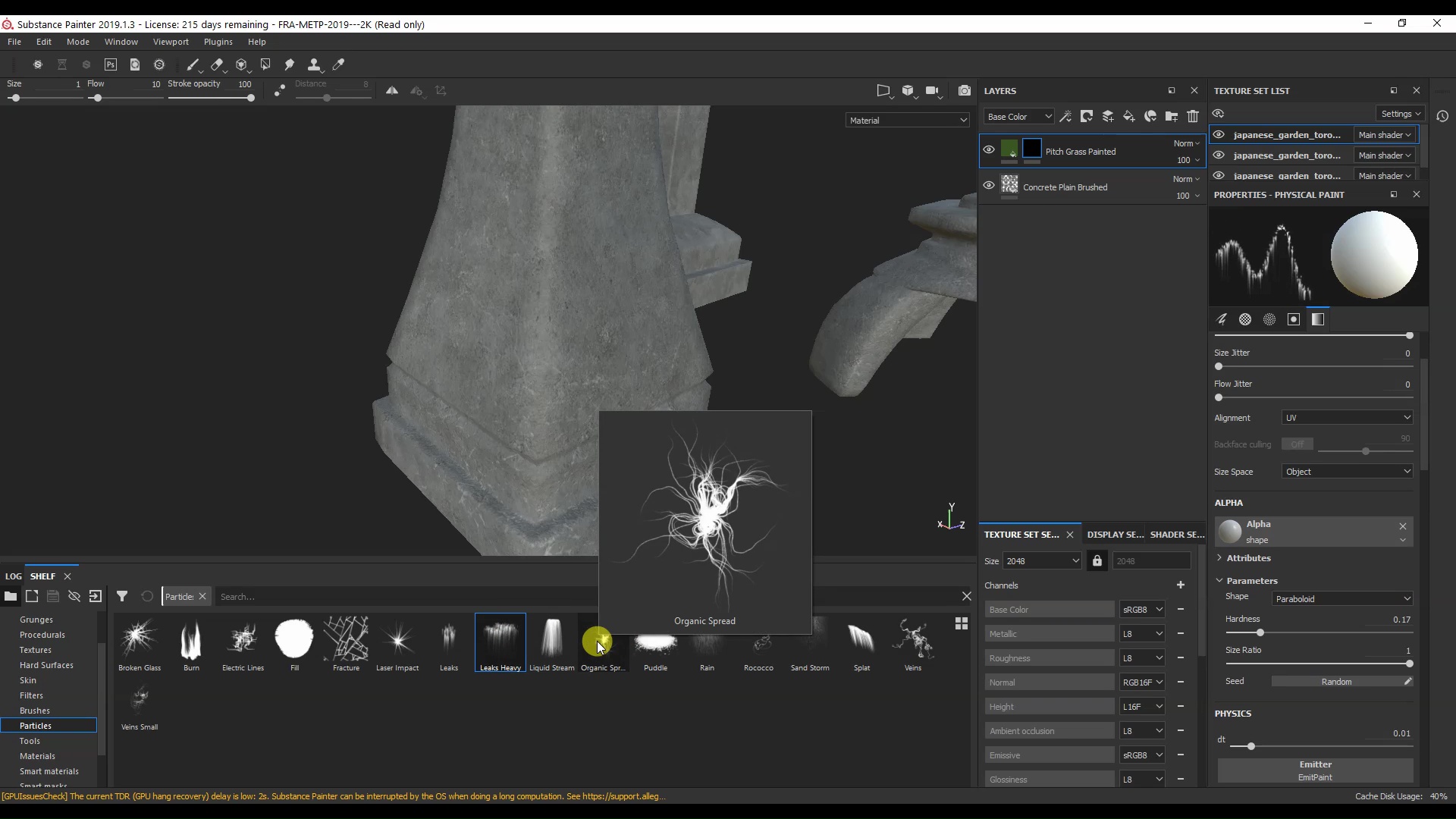 With a click on the fly on any point of the object we can immediately realize the effect generated by the brush and we can start from this to make some considerations, modifying some parameters in the “Properties - Physical paint” tab; for example, we can: 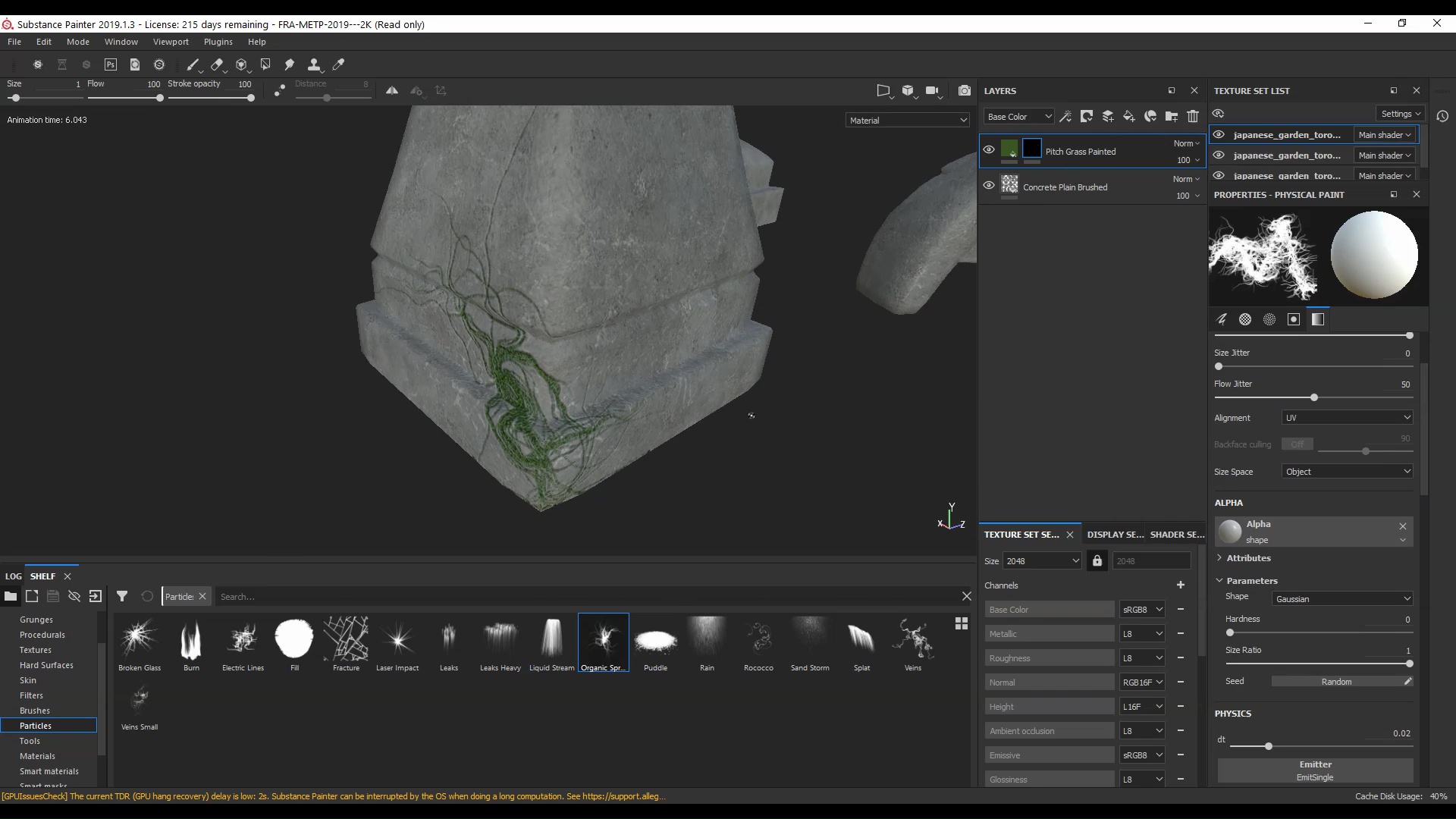 It should be noted that for both Particle Life and Particle Speed ​​there are also parameters with the Rand suffix, “Random”, to add a certain margin of randomness to the value given to the main parameter.

With this information it is possible to start painting the particles with single clicks or with click and drag in the layer mask of the material; obviously, we can undo the operations with the shortcut CTRL + Z. 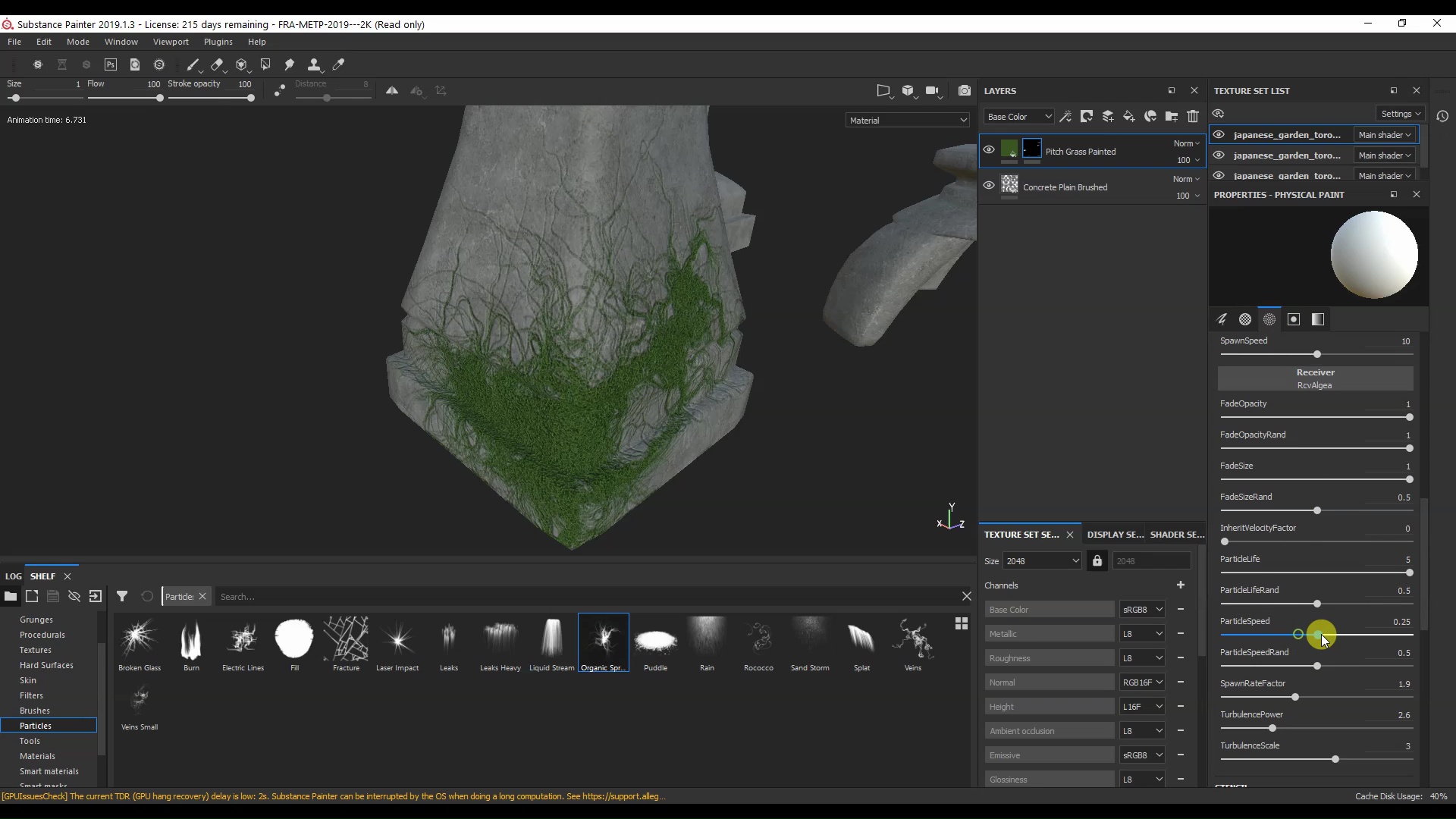 In my case, I believe that the children particles should not move too far from the main brushstroke, nor have too turbulent dispersions, so I act accordingly on the parameters I mentioned; 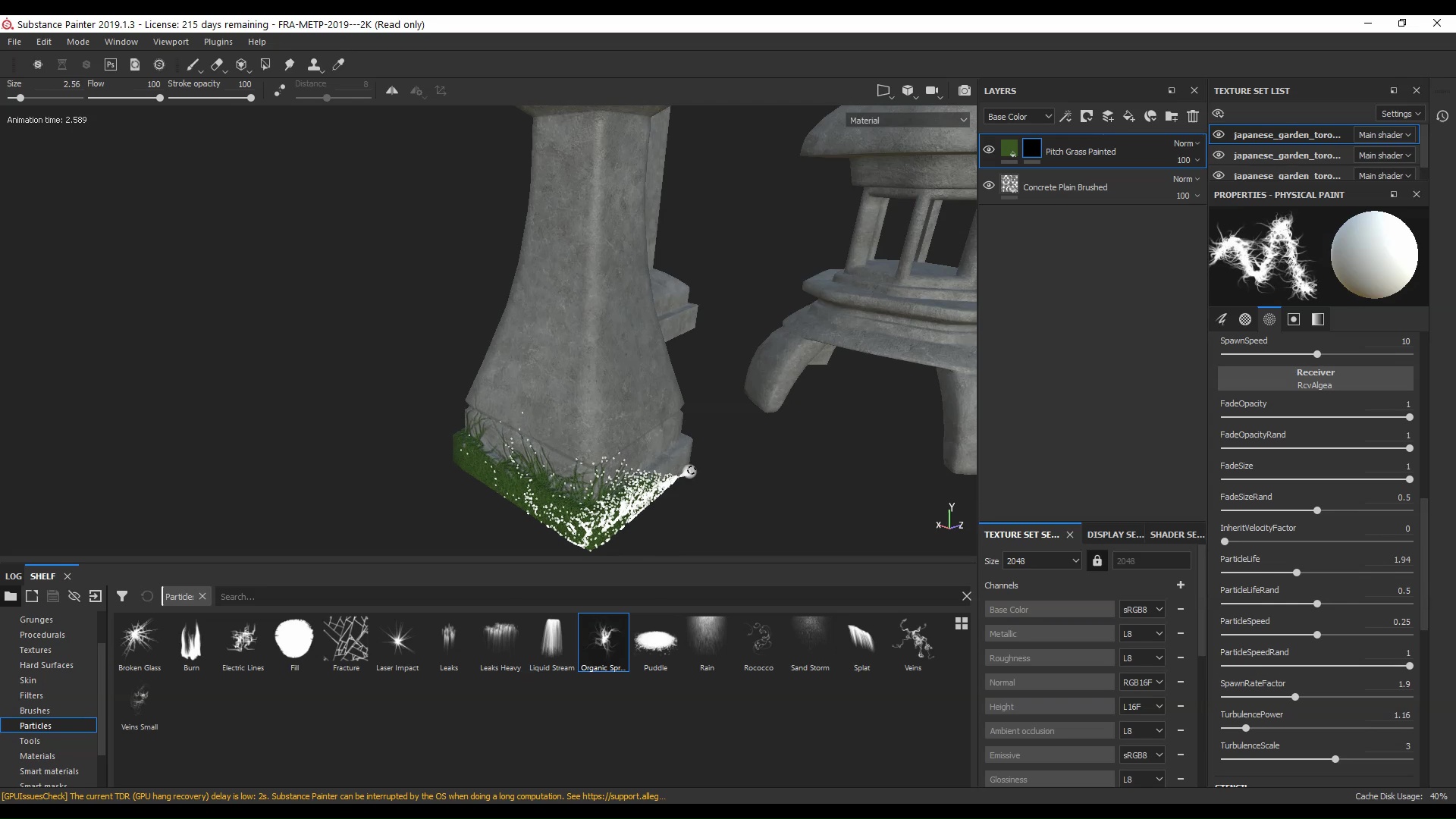 rather, I make larger main strokes (by varying the Size parameter of the brush, with the shortcut CTRL + mouse wheel) and more extended, with clicking and dragging on the surface of the objects. 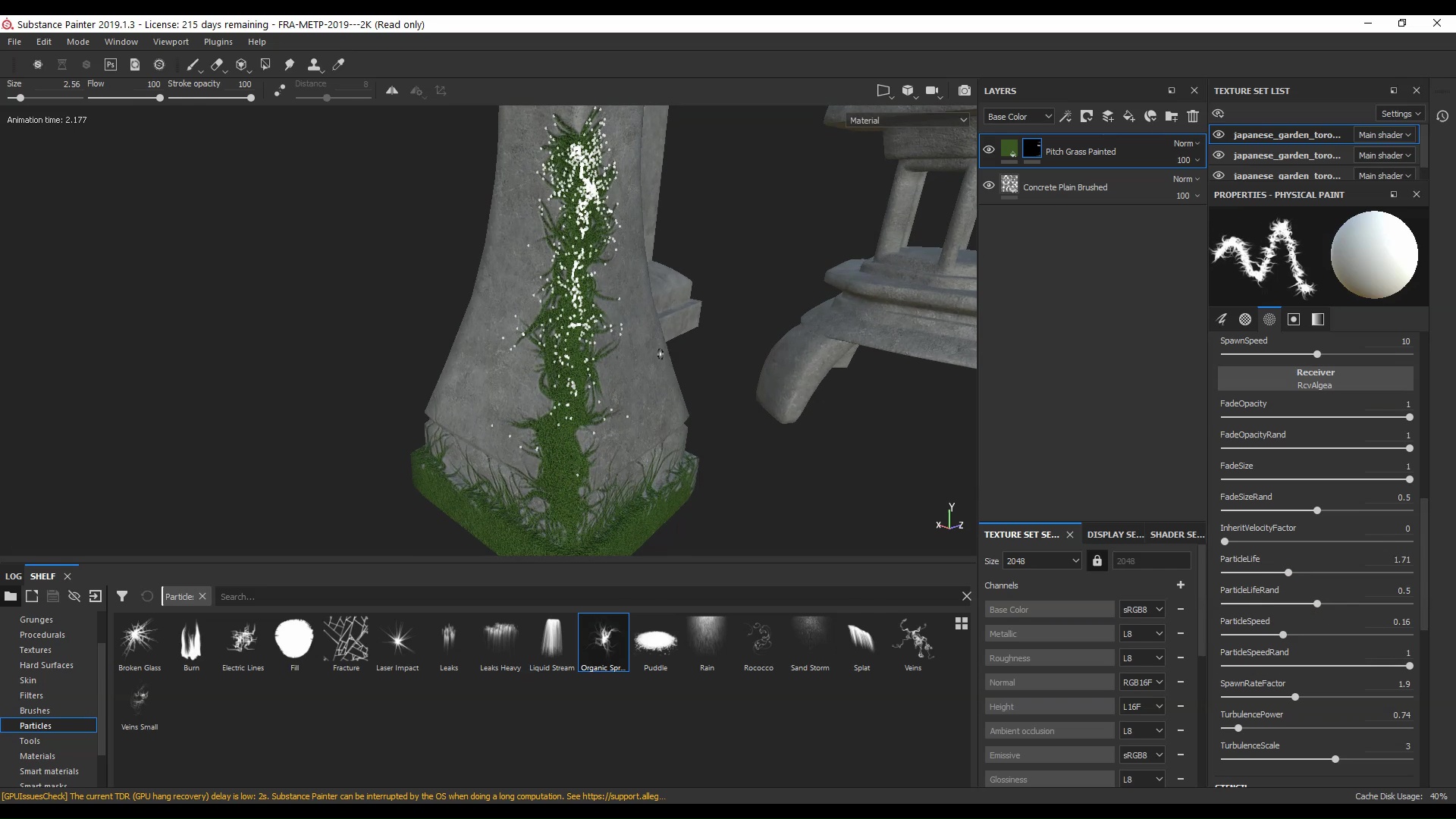 Before closing this tutorial, however, two considerations: the particles, as we are using them, are influencing a layer mask, so: 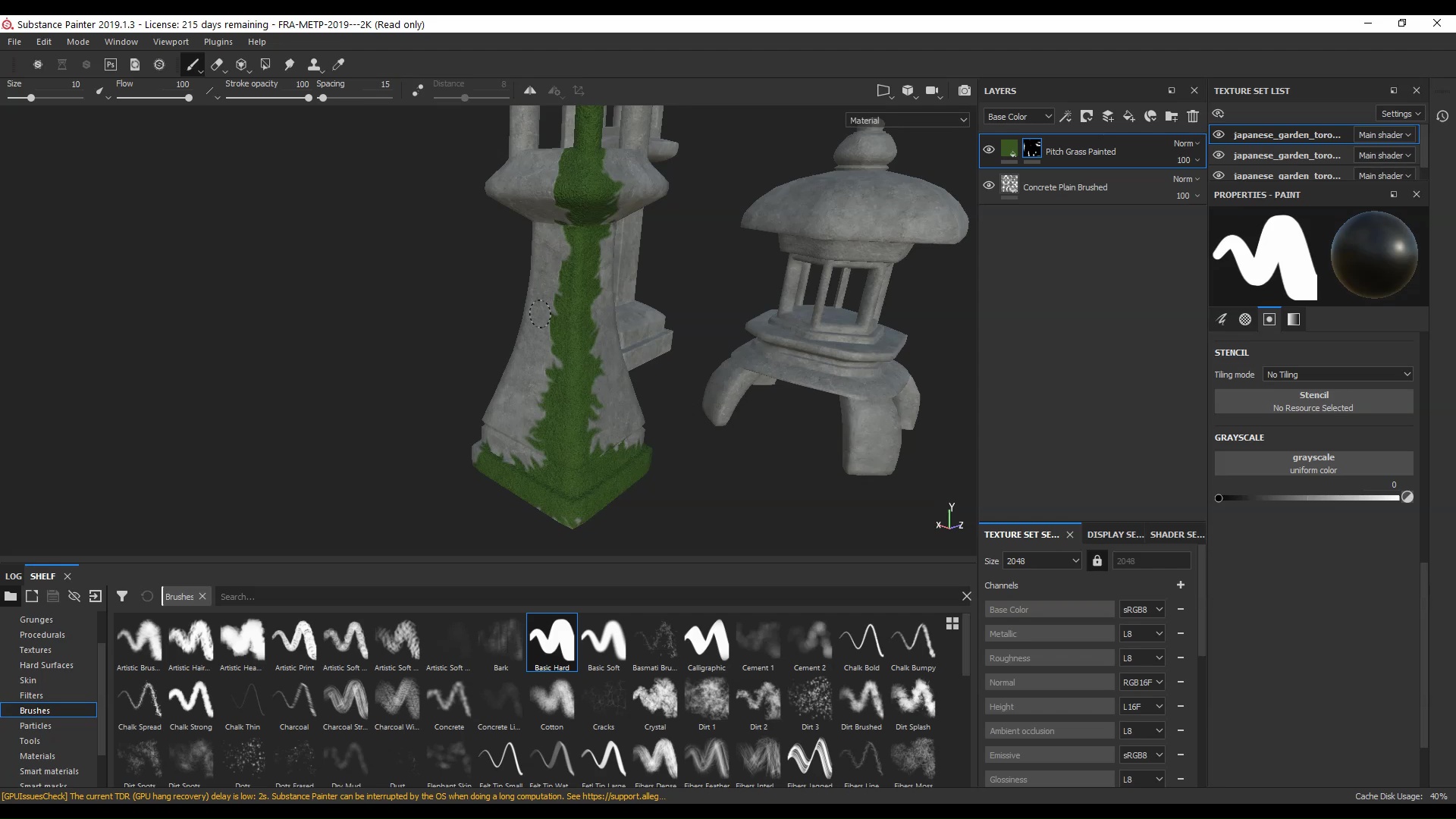 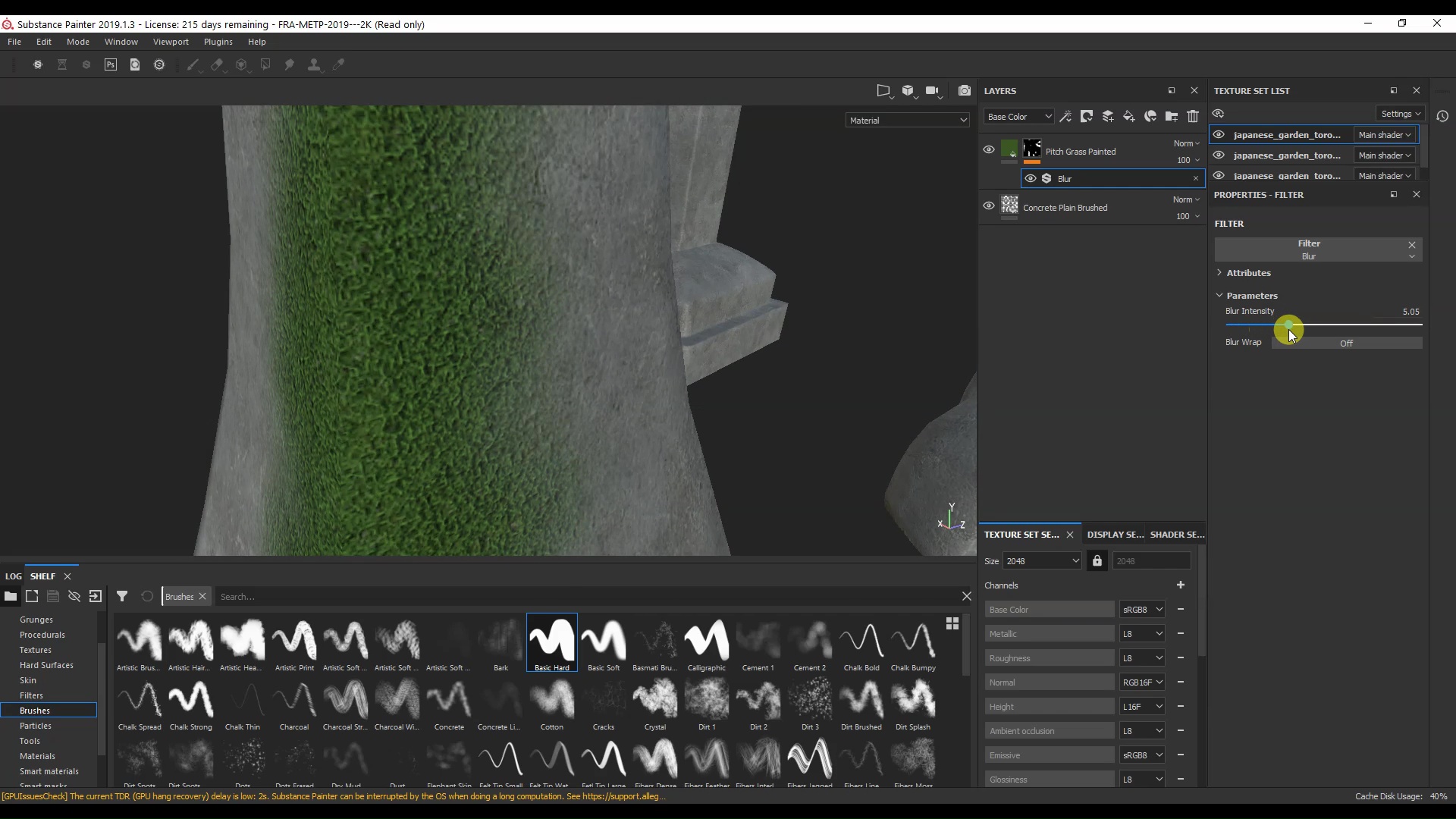 To these considerations we must add the fact that, of course, it is possible to change the Material settings at any time: so far, in fact, we have worked on the mask that determines the areas of application of the effect, but the material is still there and we can change the color, Roughness, mapping type, scale, rotation, etc. 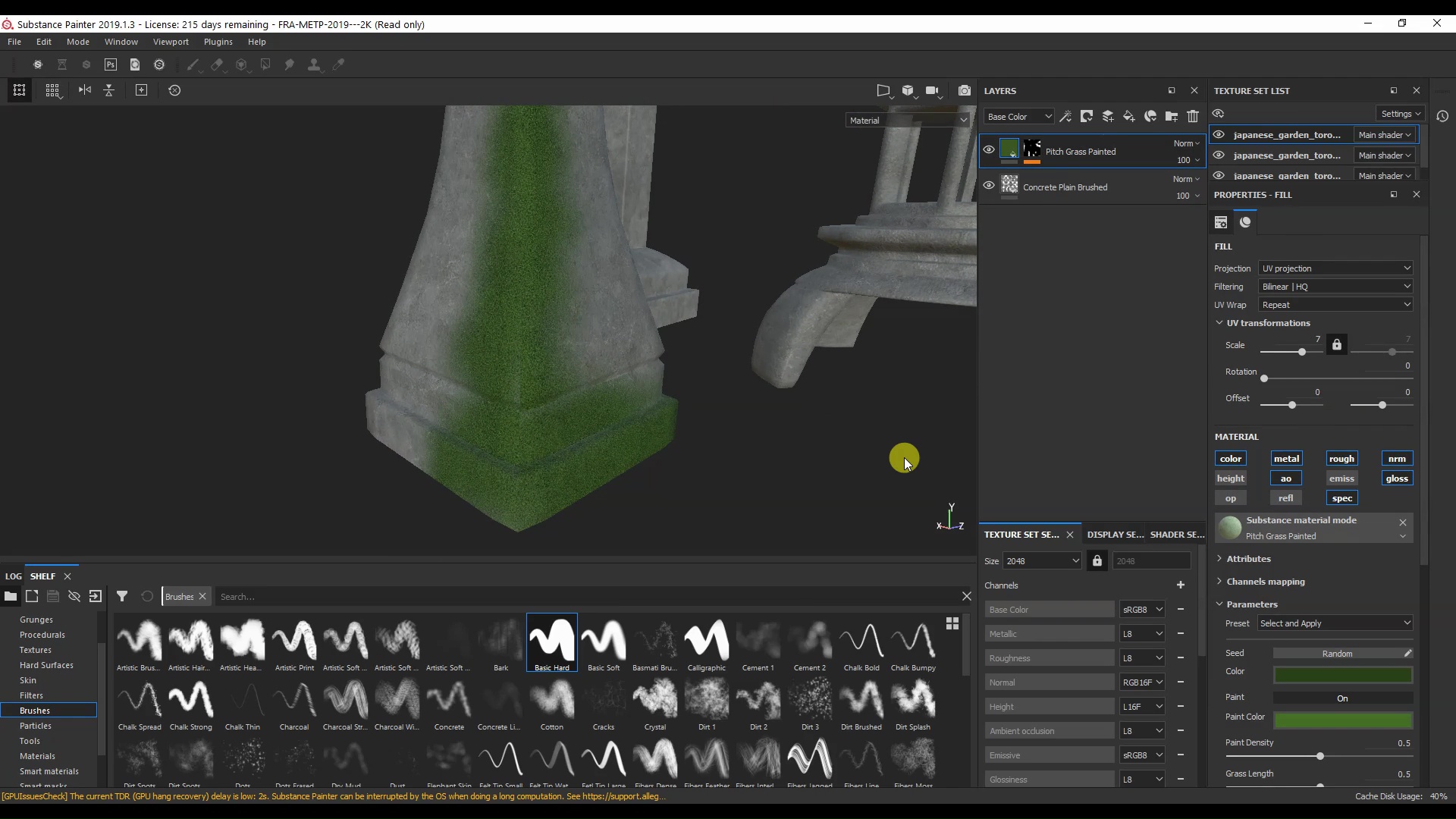 Well, that's all for this videotutorial! See you soon!

WARNING --- Since May 1st 2021, this website is no longer updated with new 3D models or new videotutorials.