To keep yourself up-to-date on my activities or to contact me, you can follow me on Sketchfab.

Regarding the videos... since my own pronunciation is VERY bad, I use an AI reader in my videos; I hope you don't mind! For each video, however, the text version is available on this website.

In this tutorial we will see how to make the image visible right now on the screen with Blender 3.0 Alpha and Cycles. This is a basic tutorial, in which a few simple elements of modeling, creation of Materials and rendering in Cycles will be covered. 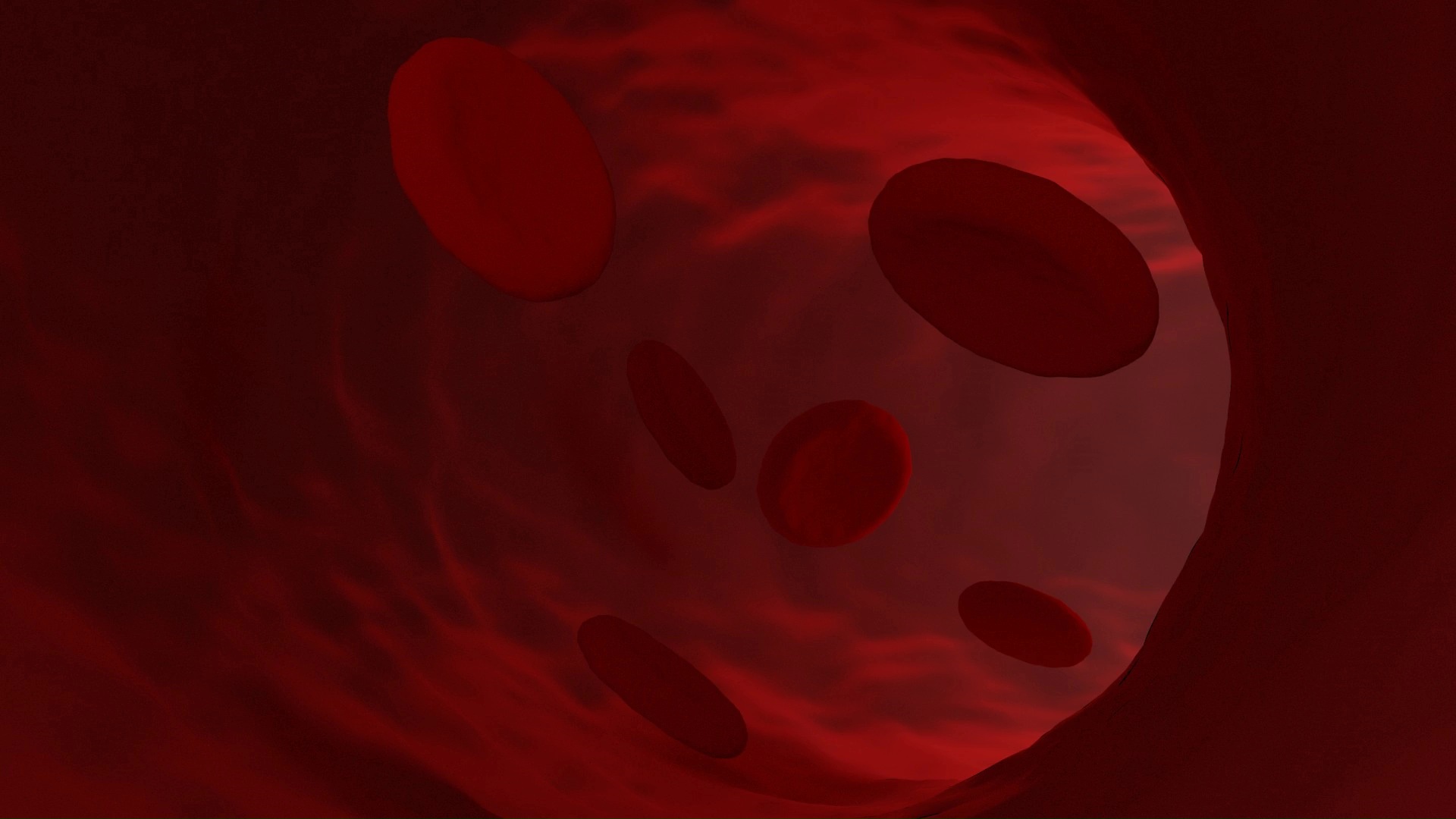 The scene is actually very simple: there are, in fact, only three mesh objects and a light source, but to get to this result starting from scratch we will first have to create accessory objects and use some modifiers.

Before starting, a consideration: the image is obviously not photorealistic; in general, the images that you will find online looking for, for example, "Red blood cells", are representations or artistic interpretations; in these results, the appearance of the red blood cells varies a lot and, furthermore, I doubt that the inner walls of the blood vessels are made like this or that there could be a source of light inside them: it is a fictional rendering, which means that you have to also use effects such as chiaroscuro, contrasts, "soft focus" and more to make it more captivating! I tried with this lighting scheme and this shot; I obviously invite you to try other configurations and other effects!

Let's start with the modeling of the blood vessel: to make it happen, we add a Bezier curve in a TOP ORTHO view. 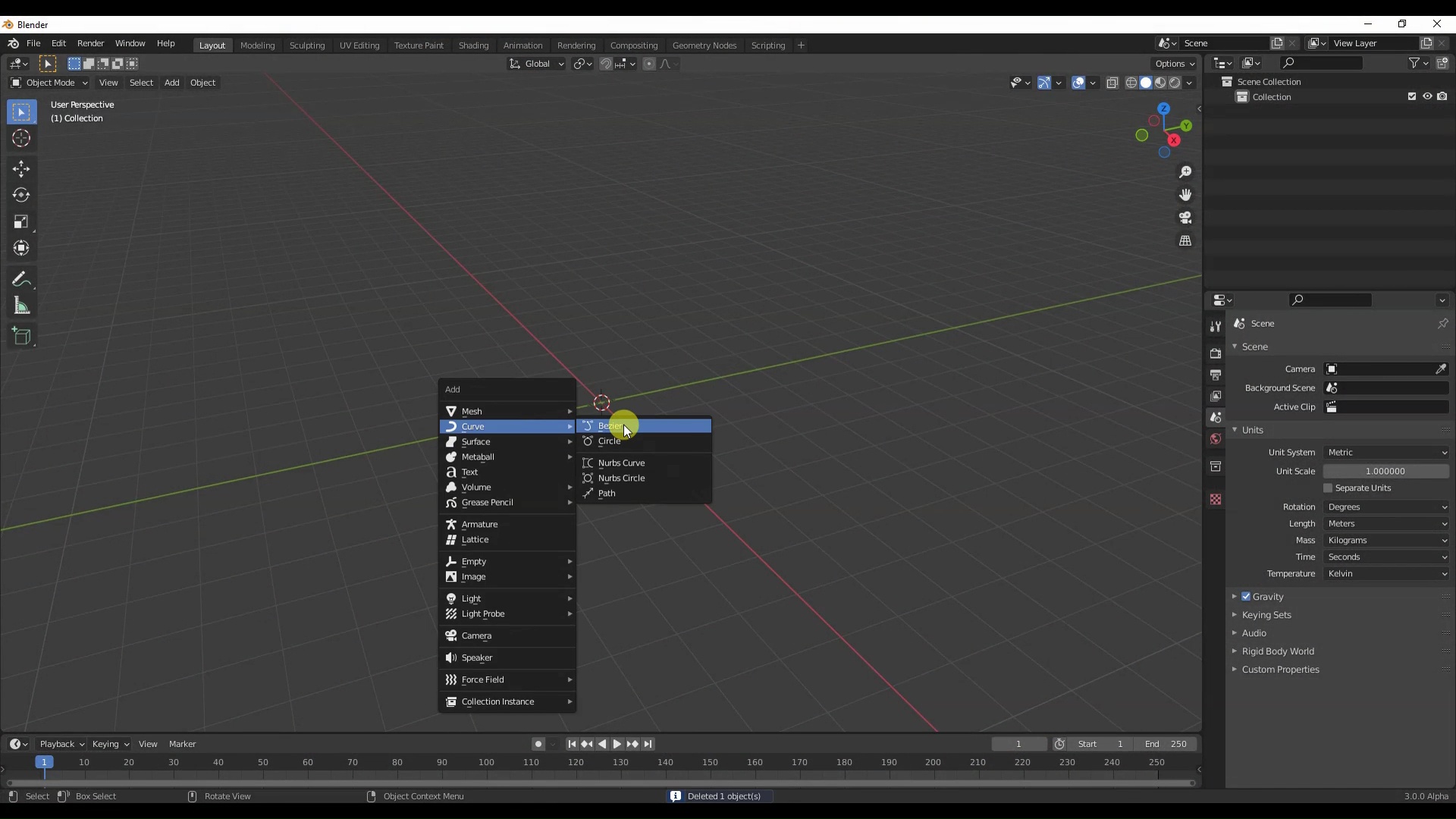 This curve represents the path of the vessel, so let's arrange it on the XY plane and orient it so as to make it curve in the final part.

To add a control point and extend the starting curve, simply go to Edit Mode, select an end of the curve, press E (Extrude) and drag, in this case only on the XY plane. 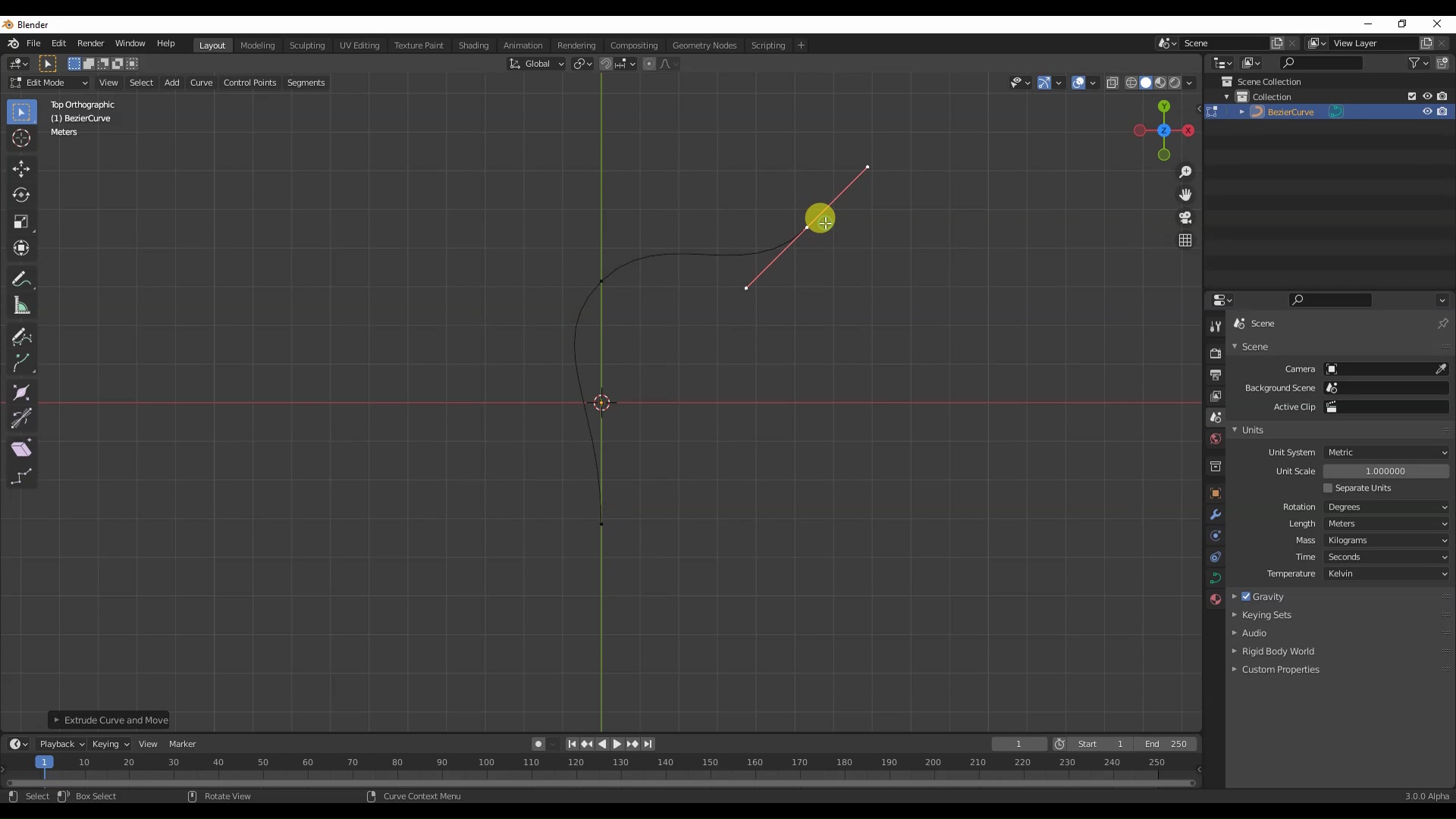 To assign a profile to this curve, let's go back to Object Mode and add a Bezier Circle object to the scene. We resize the object so as to make it easily visible and selectable in the 3D view, then apply the scale transformations to this object using the CTRL A shortcut and choosing “Scale” in the menu that will appear on the screen.

Select the path curve again, open the Object Data tab in the Properties editor, then open the Geometry - Bevel section, select the Object option, click on the Object field and, from the menu that will appear, choose the Bezier Circle created a little while ago.

The circle will be used as a profile to extrude along the path defined by the curve. 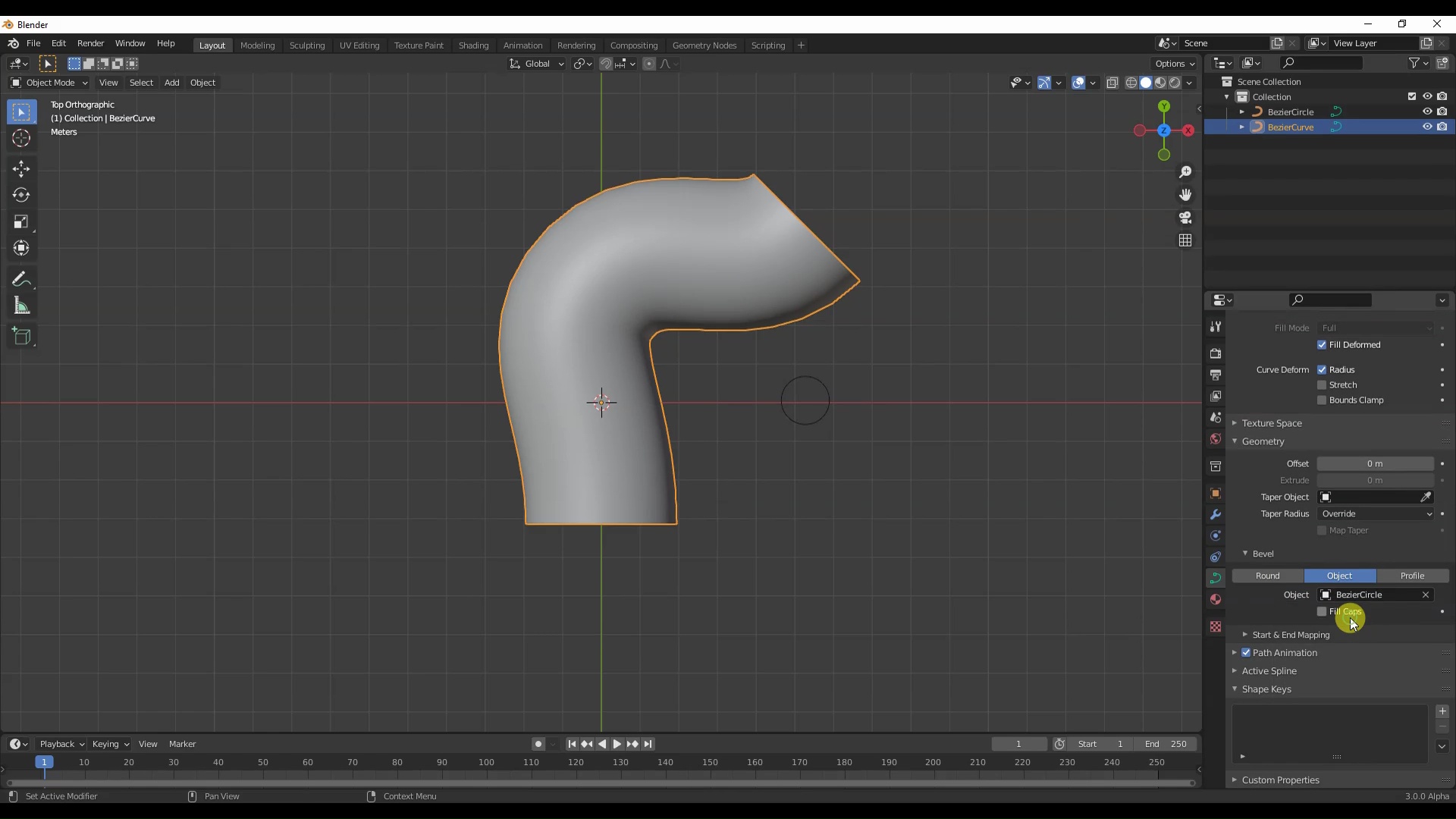 At this stage we can still interactively modify the path, so we position the camera at the entrance to the blood vessel and make the changes we deem most appropriate. 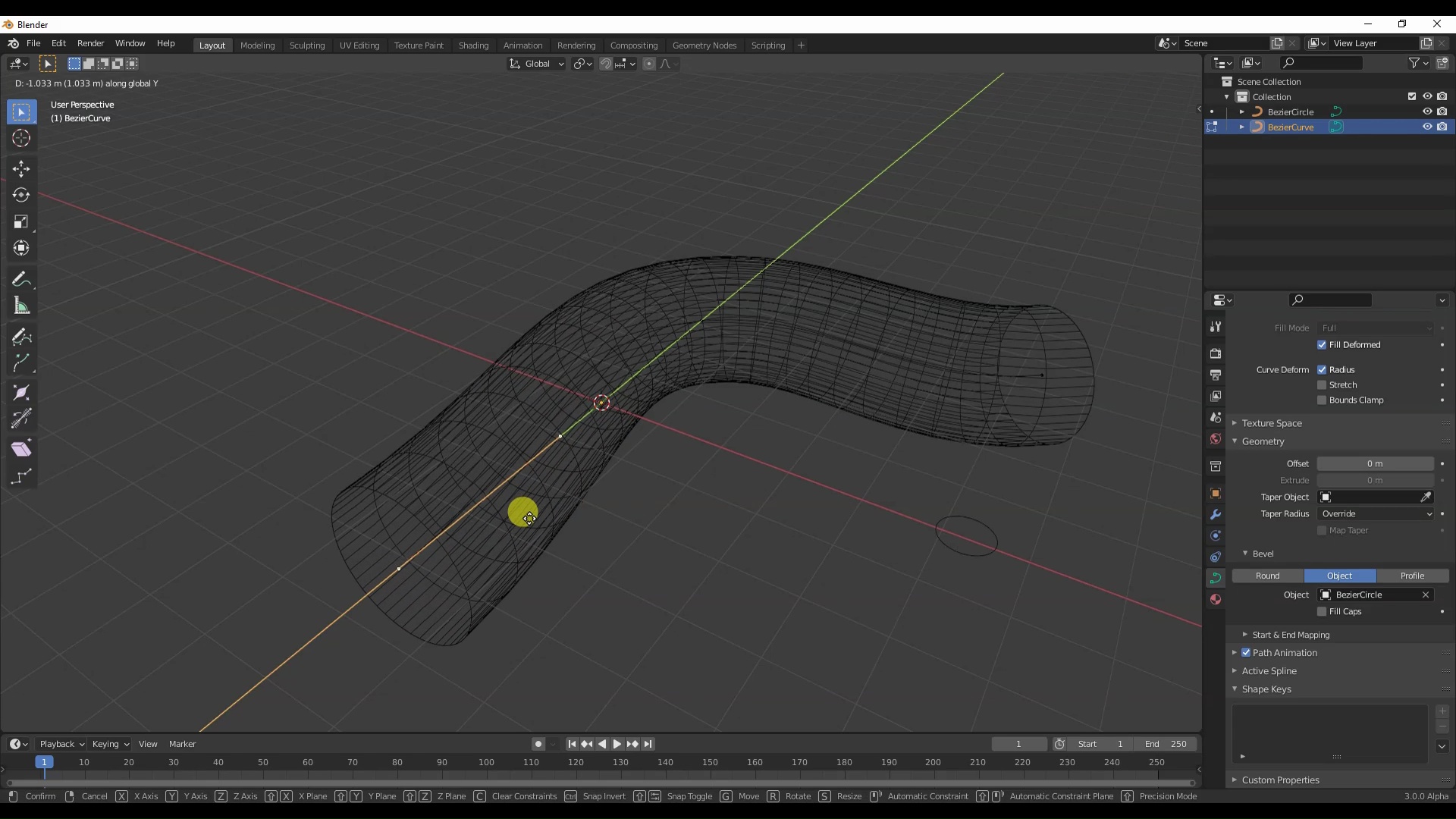 In order to deform the blood vessel walls a little we have to use a Displace modifier; this modifier, however, is only available with meshes, so first we need to convert the path from Curves to Mesh; that's why I advise you to define the path well when it is still a Curve object: you can also do it later, but it will be a little more complicated.

To convert the blood vessel to mesh, right click on this object and select Convert To - Mesh in the Object Context menu that will appear on the screen. 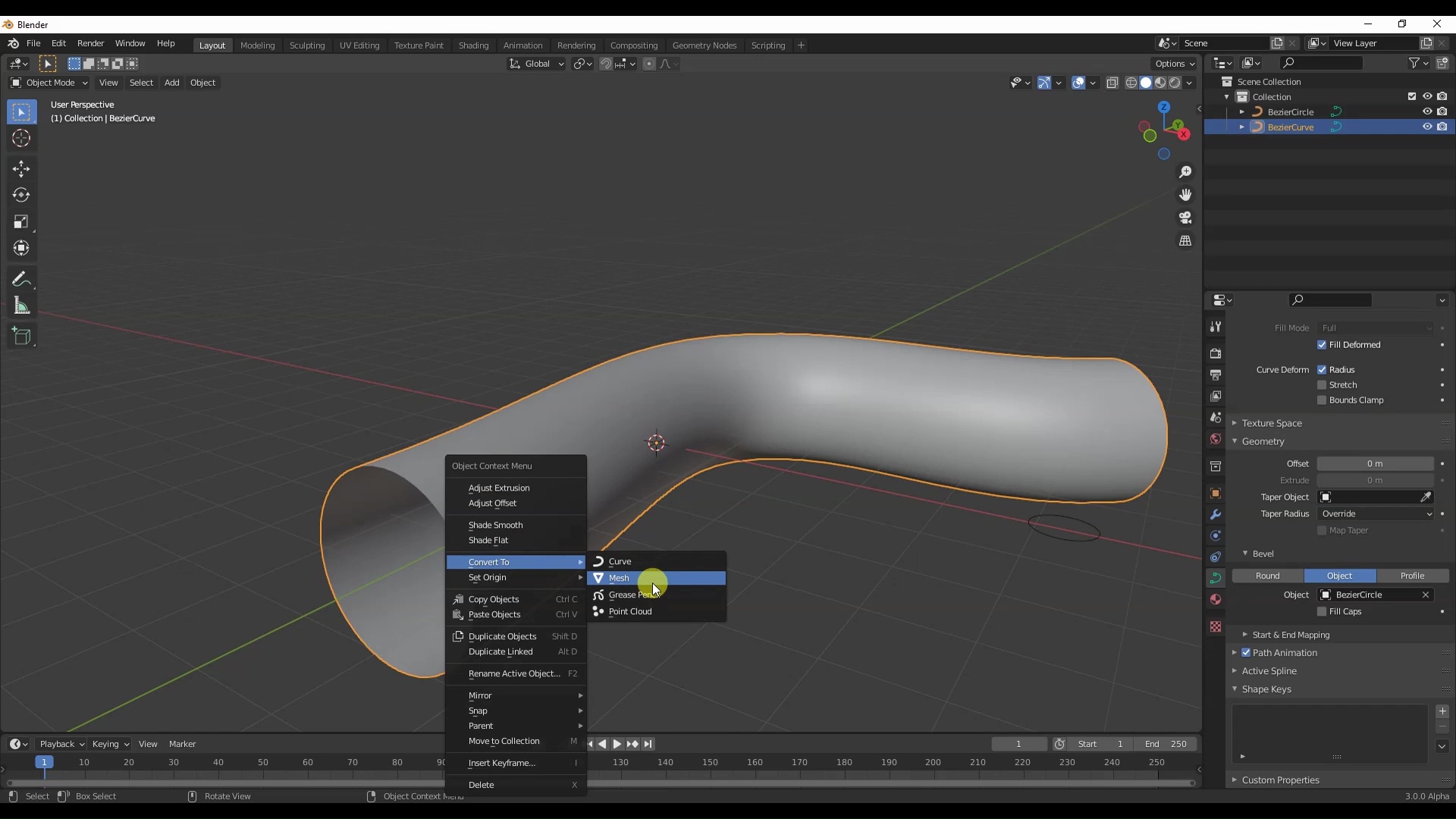 We can delete the BezierCircle object from the scene, because we don't need it anymore.

Now go to the Modifier tab, in the Properties editor, and add a Displace modifier.

Click the New button to tell Blender that you want to use a Texture, then click the “Show Texture in Texture tab” button to set the Texture to associate with the modifier.

Let's choose a Clouds-type texture, initially with Size 0.5, in order to introduce wide, not very marked disturbances, then let's go back to the modifier tab to reduce the value of the Strength parameter. 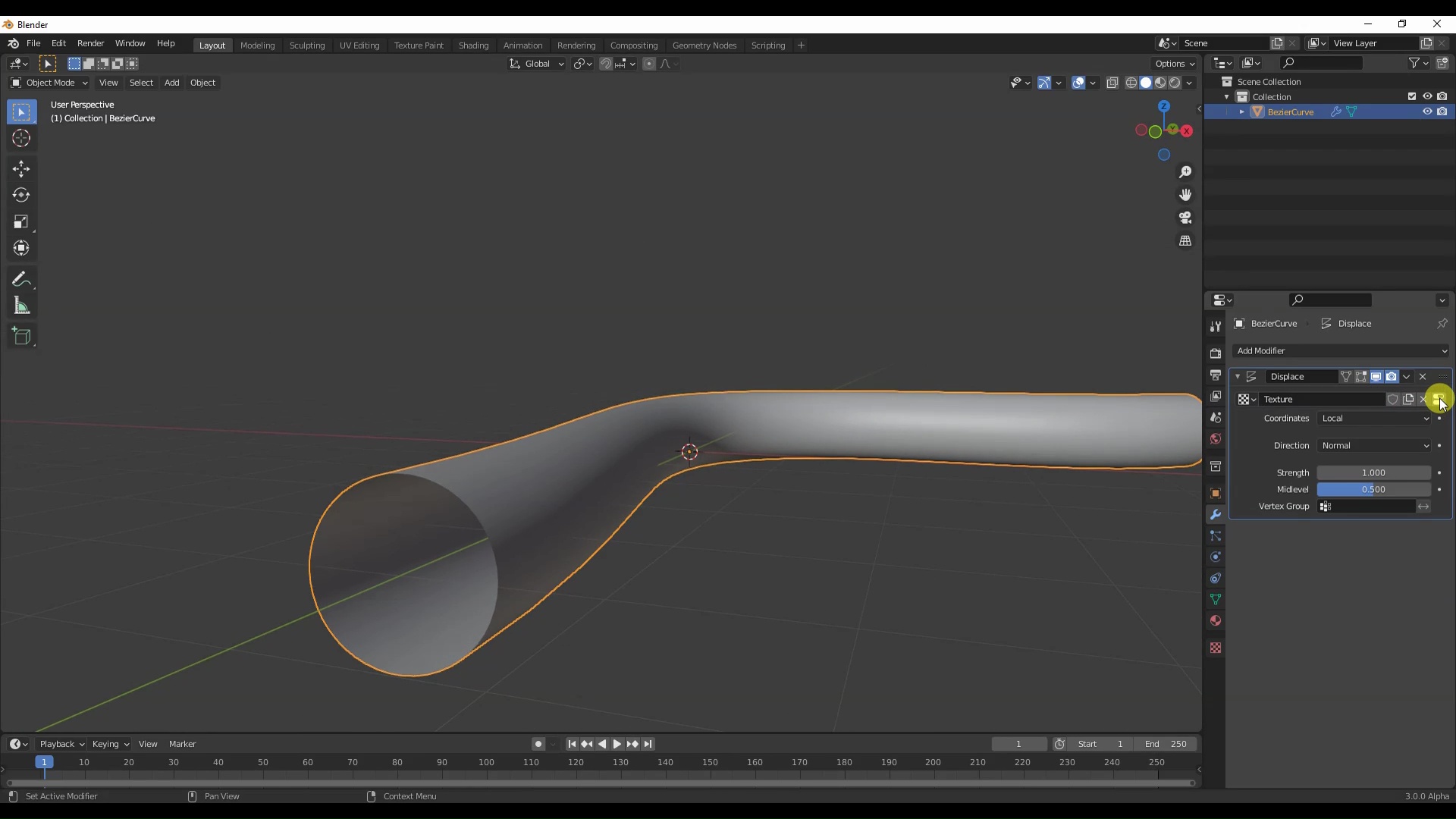 To apply the effects correctly, we also apply the scale transformations to the blood vessel object (with CTRL A and Apply Scale, as previously done with the Bezier Circle).

If necessary, we add a Subdivision modifier, placing it above the Displace modifier, in order to increase the number of vertices of the object and, therefore, the quality of the disturbance created by Displace; the order is important: Subdivision must increase the number of vertices and faces BEFORE applying Displace, so that Displace can work on denser geometry and produce a better result. 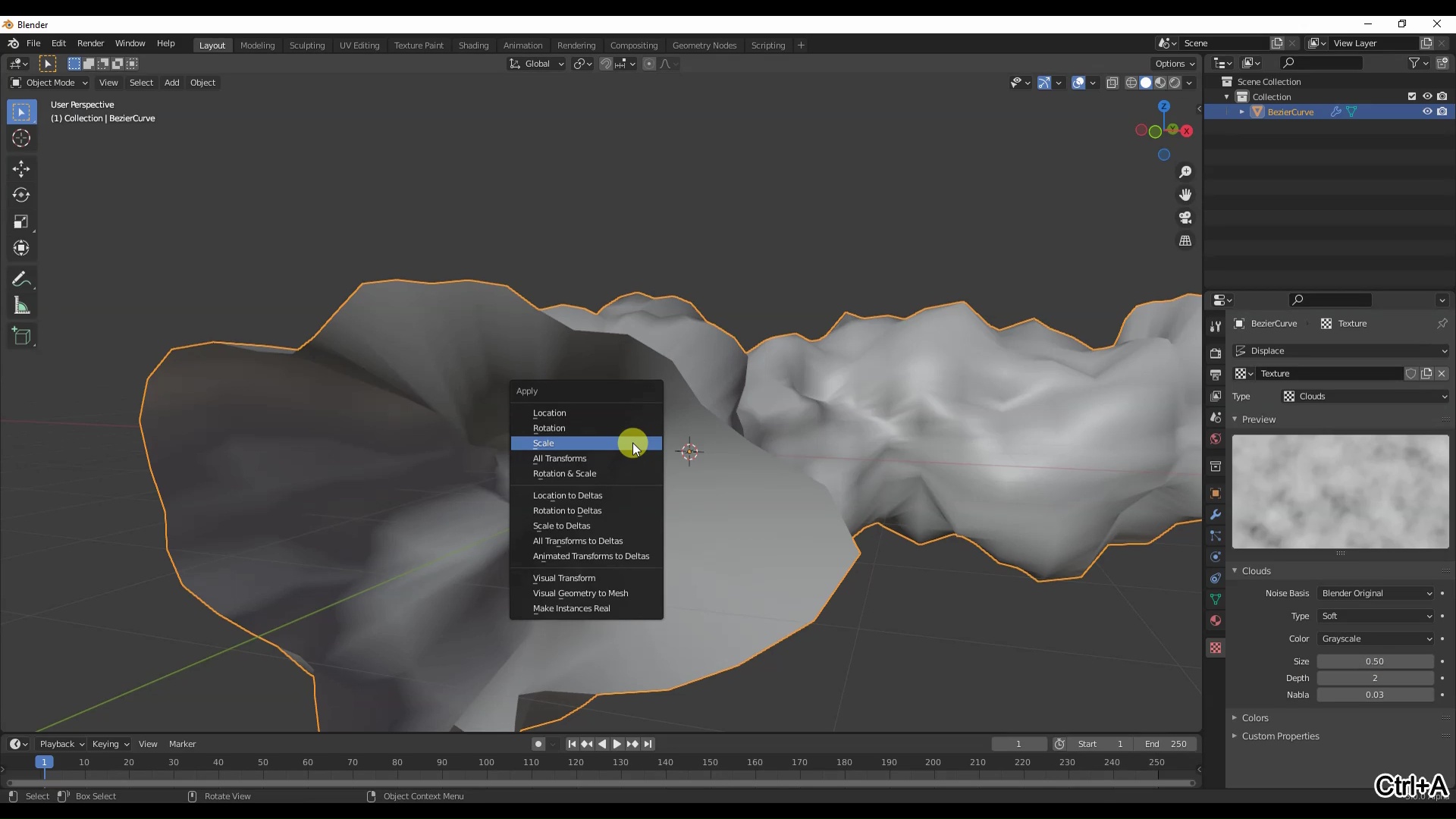 The final effect depends on your taste; in particular, modify both the intensity parameter of the Displace modifier and the size of the Texture Clouds used, until you reach a satisfactory result.

So far we have positioned the freehand camera, but it is good to introduce a virtual camera to be able to keep the camera for rendering while we proceed with the modeling and positioning of the other objects. 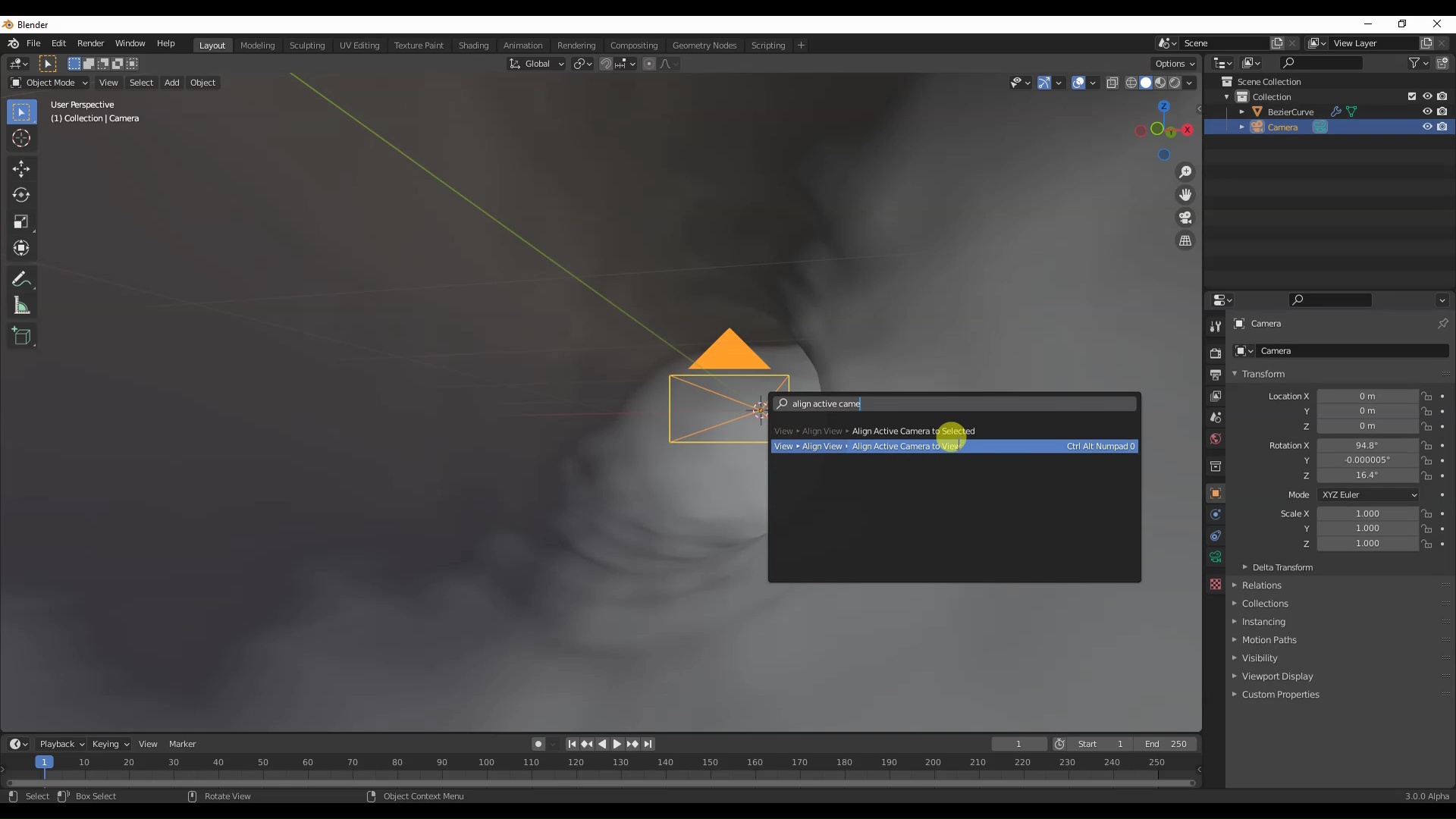 If necessary, move and rotate the camera, or change the value of the Focal Length field (in the Object Data tab of the Properties editor) to enlarge or narrow the view.

Our blood vessel has no Material and there is no light source within the scene.

Let's make sure we've set Cycles as the render engine. 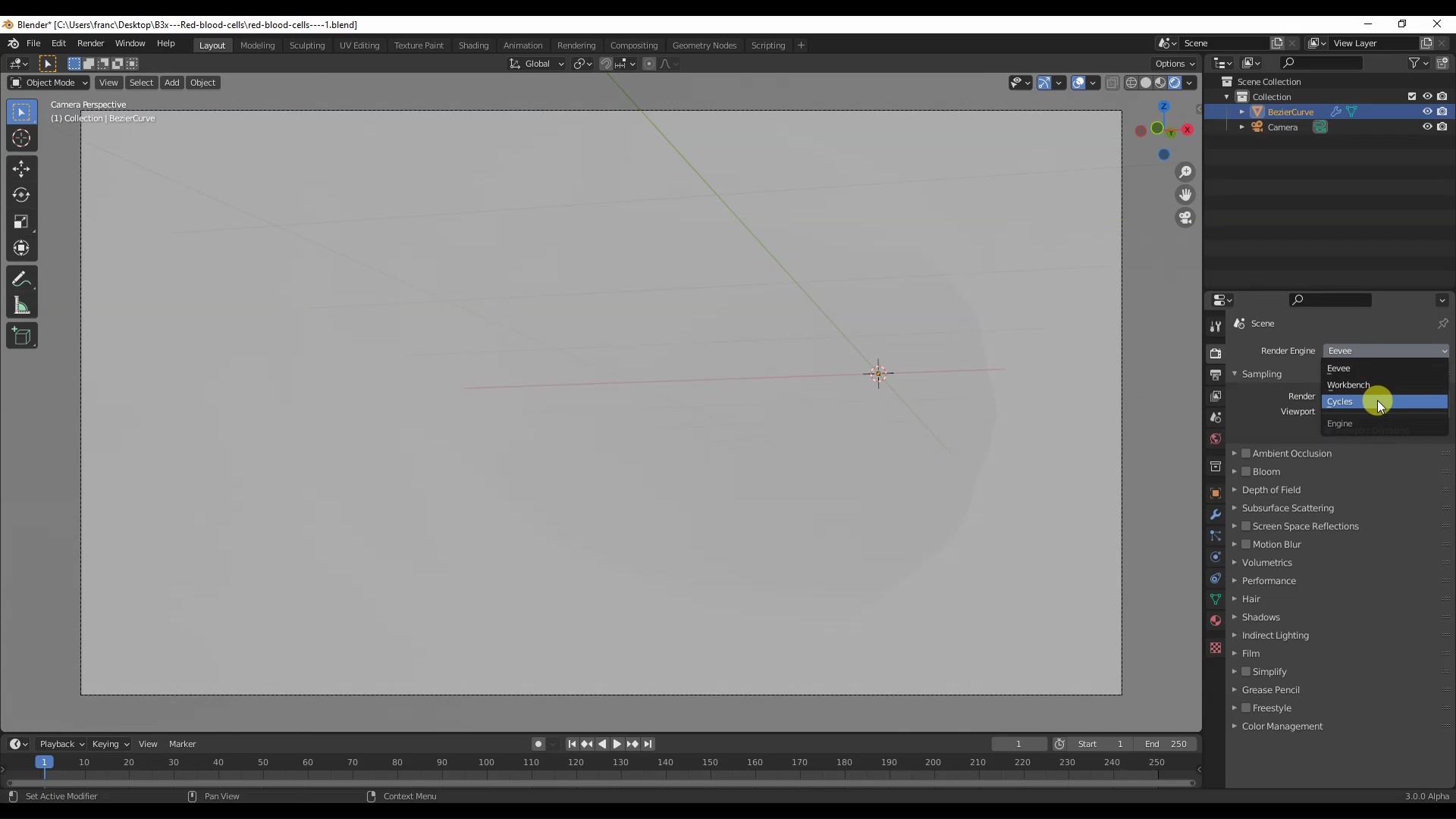 Since the appearance of the blood vessel can be done freely (because, as we said at the beginning of the tutorial, this will not be a photorealistic rendering), let's start by setting a Mix Shader node with Factor 0.8 (for which 80% of the final result will be given by the second Shader).

As the first Shader of the Mix node we set Glossy with pink color (for example, 0.5, 0.3, 0.3) and Roughness 1; in this way we will obtain light specular reflections, diffused, blurred, helping to create a soft focus effect.

As a second Shader, instead, we set Velvet with pure red color; this particular Shader will also help create a blurry, soft focus effect. 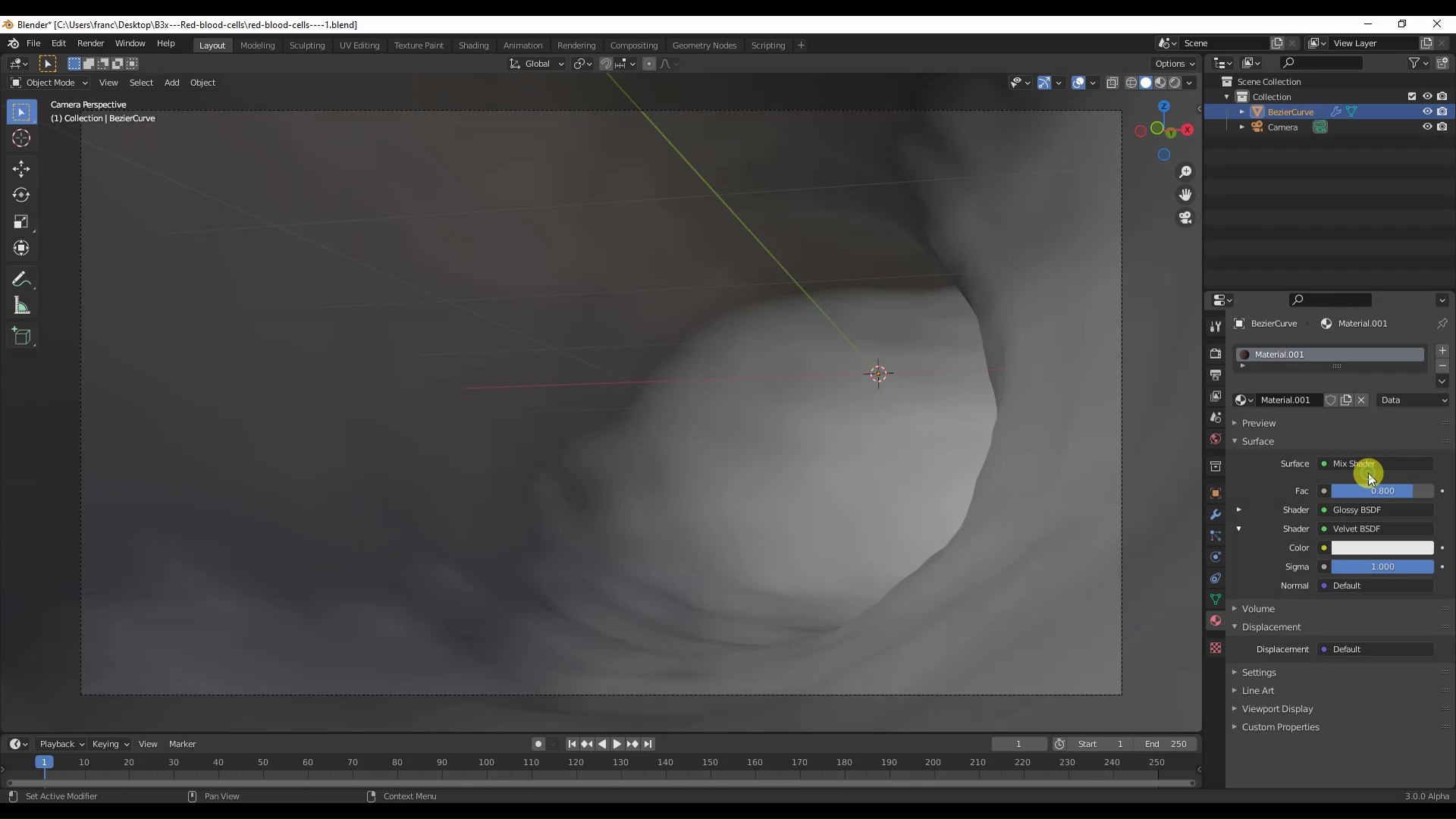 Just behind the curve of the blood vessel we now insert a Point Light light source with high initial intensity; we will however adjust this parameter later. 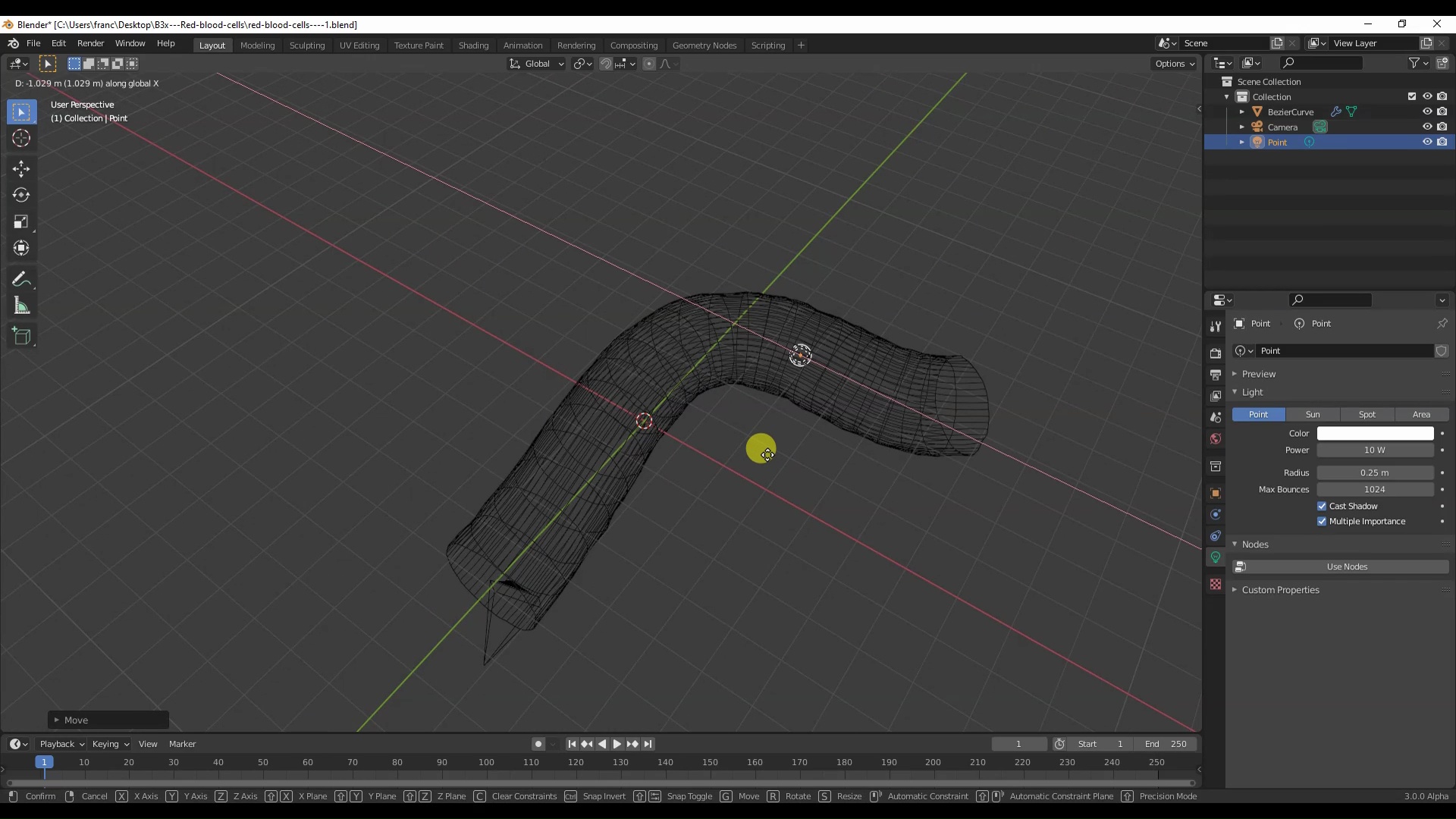 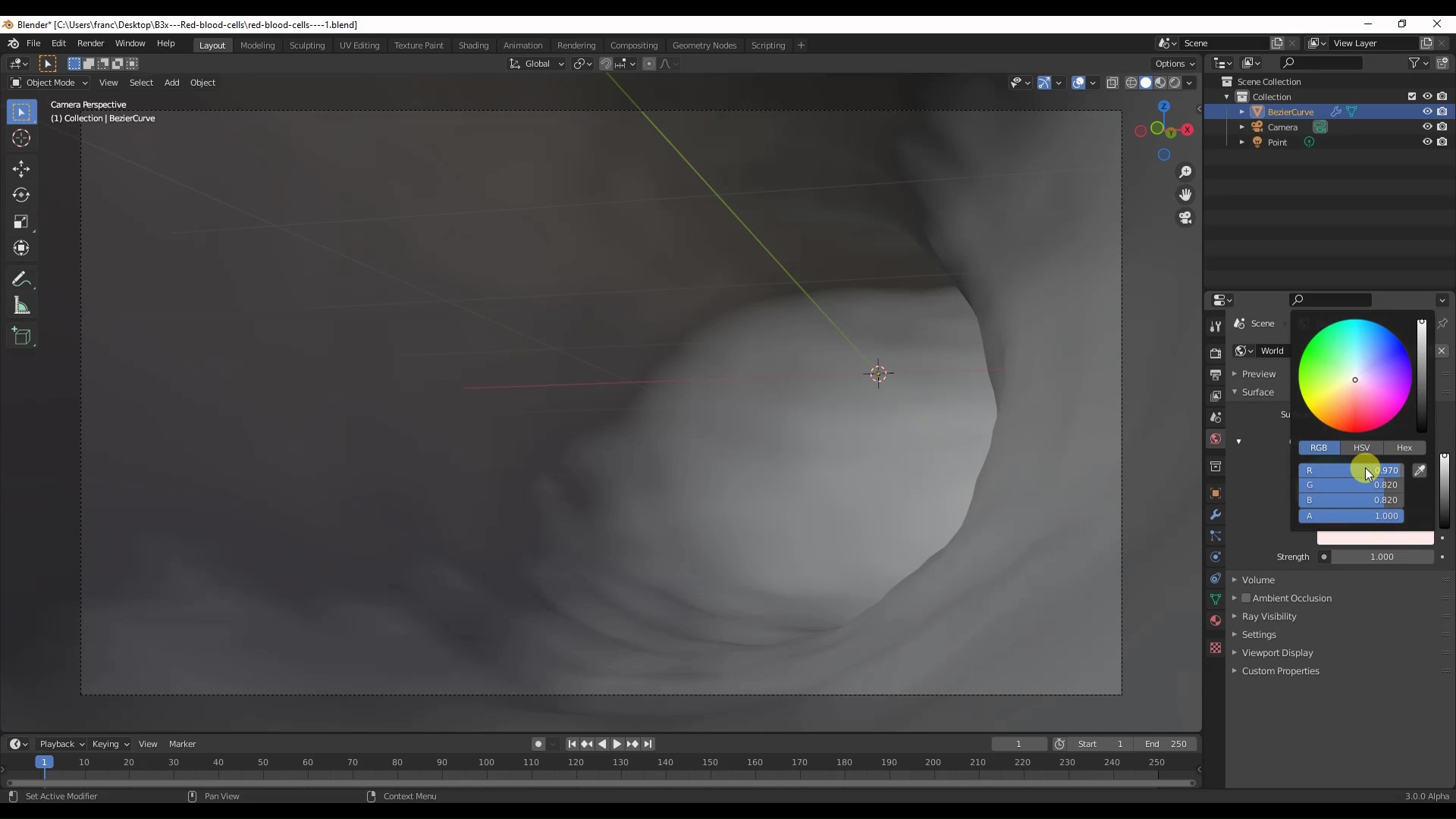 Let's take a look at the preview of the rendering in real time from the virtual camera and modify the intensity values of the light sources and possibly also of Subdivision, the intensity of the Displace modifier or the size of the Texture Cloud, until we get a satisfying result.

There are various ways to model this object; perhaps the simplest is to carry out these operations: 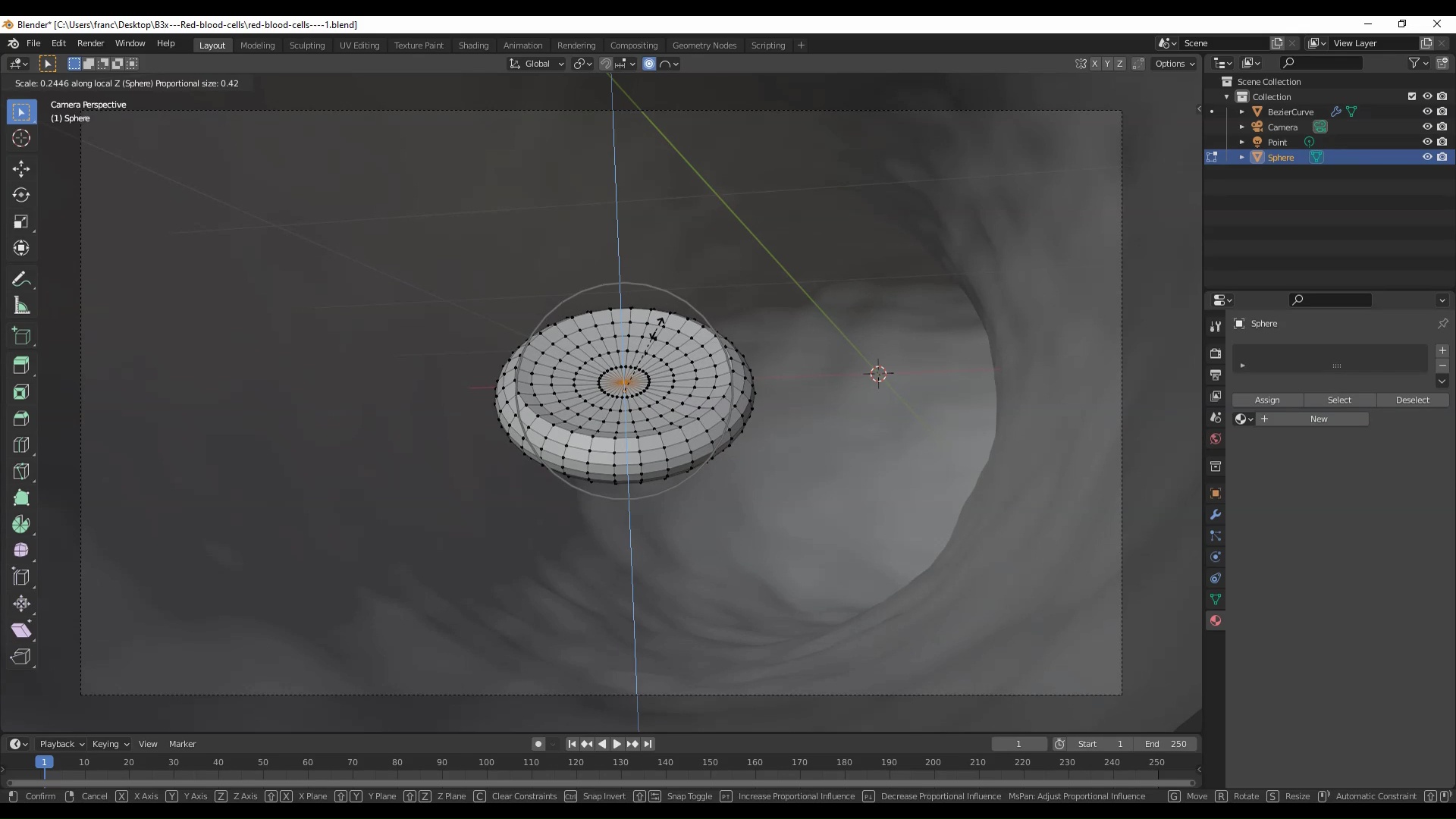 Again, we increase the vertices of the geometry with a Subdivision Surface modifier in order to then add a Displace modifier, which we will set as desired, to slightly perturb the shape of the red blood cell. 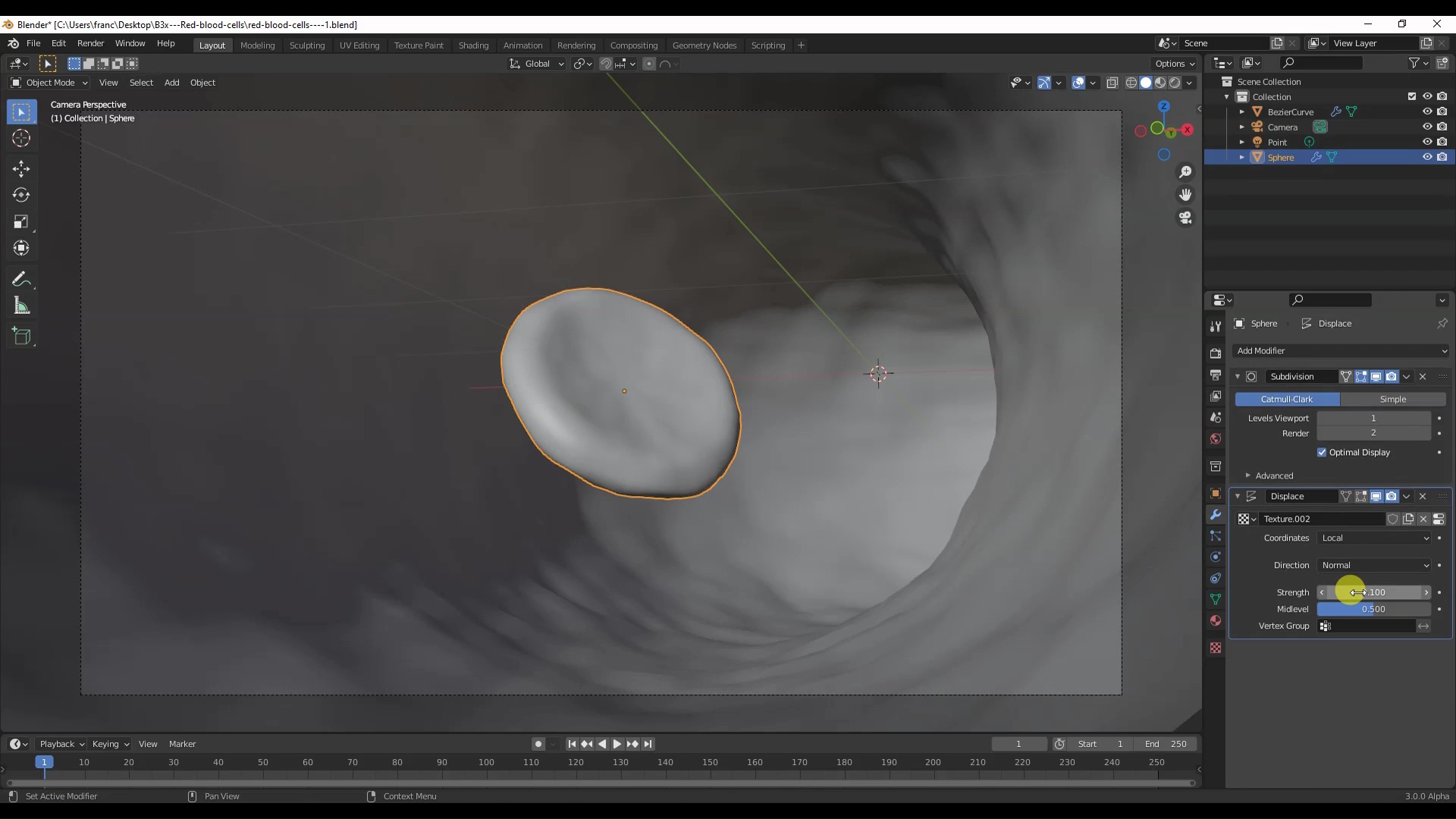 Let's set the Shading Smooth by right clicking and selecting Shade Smooth in the Context Menu that will appear on the screen.

We then make several copies of this object and arrange them, rotating them, in various points of the blood vessel, until we obtain the desired composition. 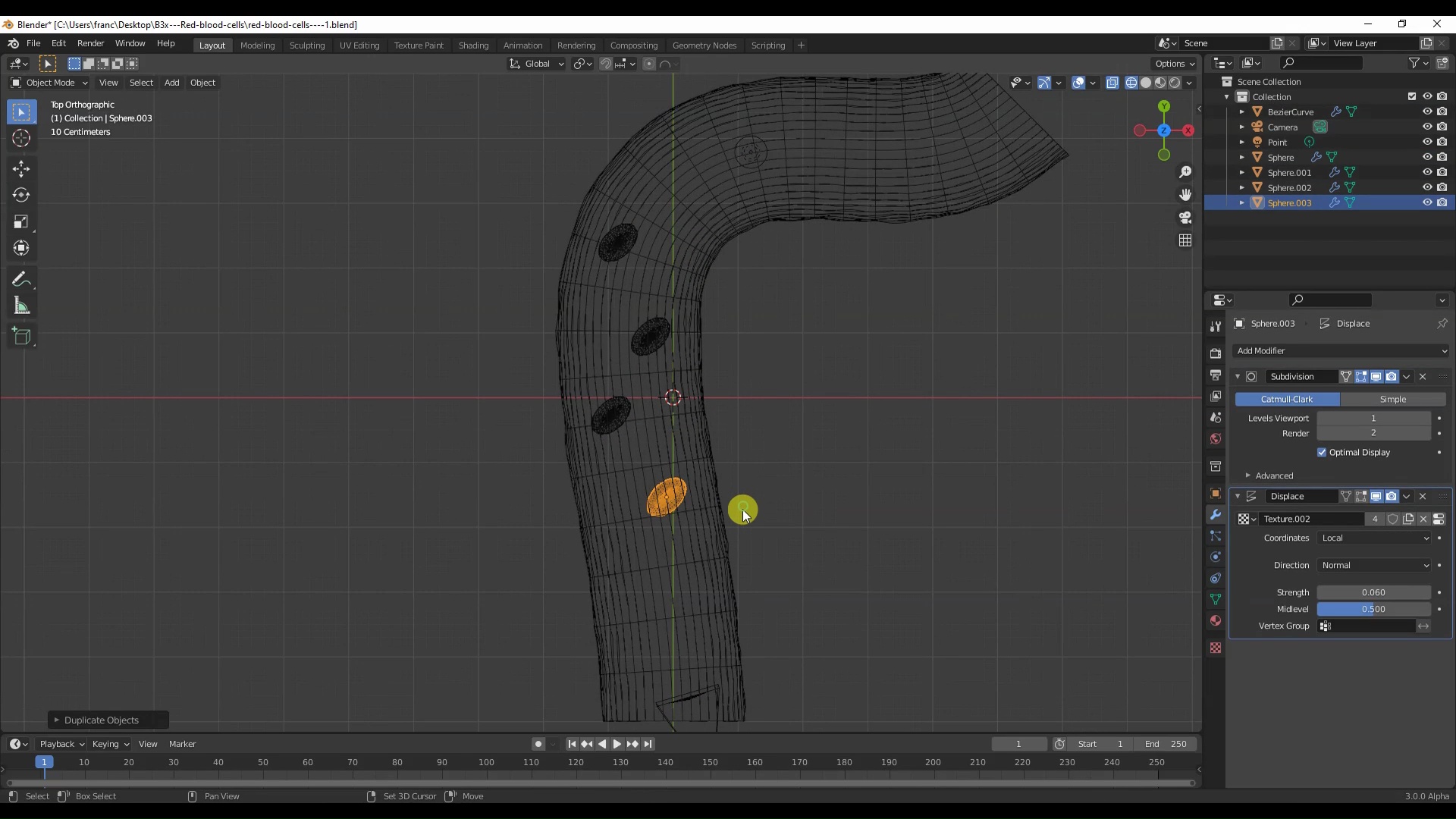 At this point all that remains is to switch to Rendered display mode in the Camera view to be able to make the final touches to the various settings before starting the actual rendering, with F12 (or with Render Image from the Render menu). 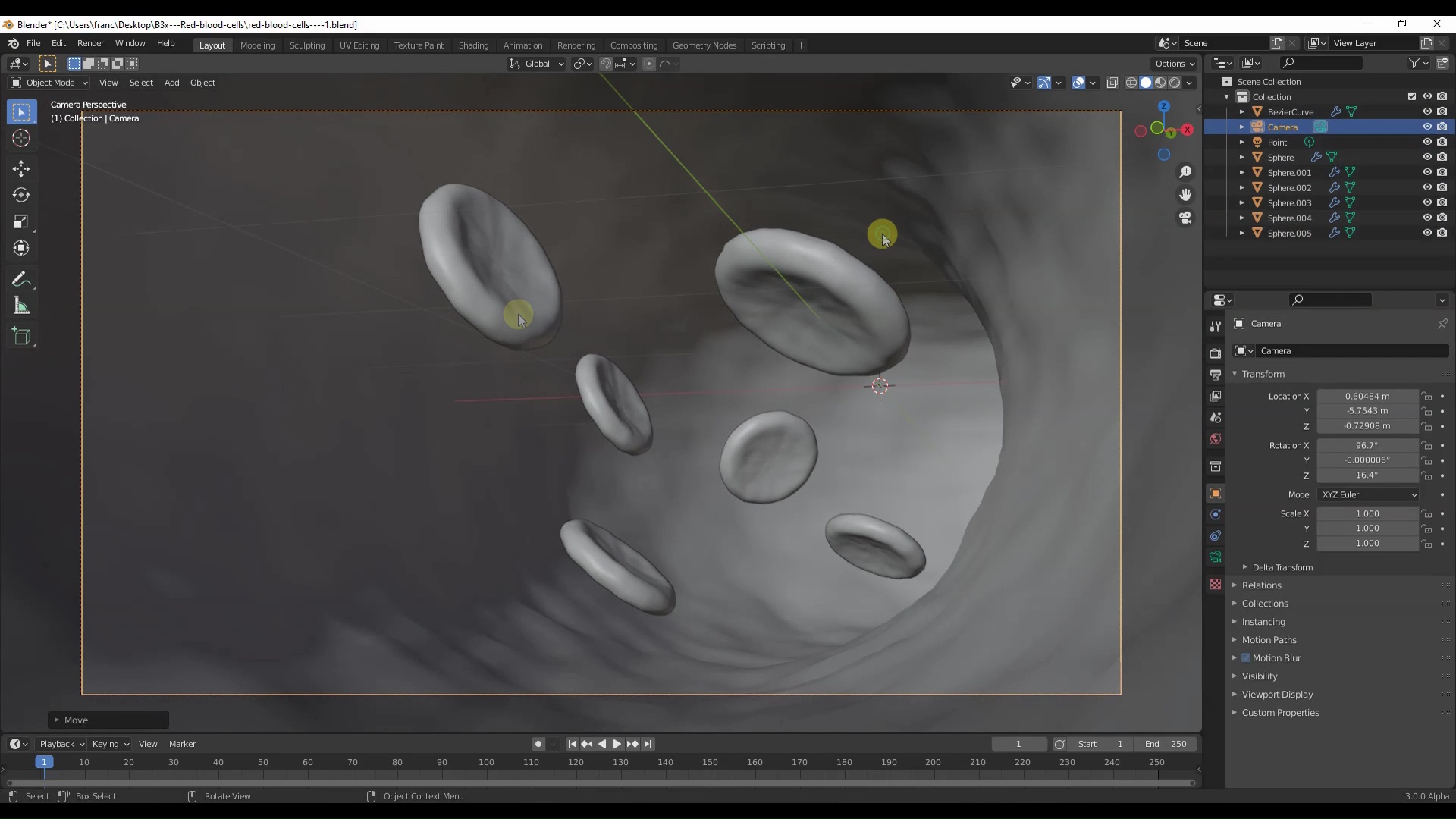 I don't like the first render: I think the red blood cells Shader is inappropriate and the blood vessel has few details. 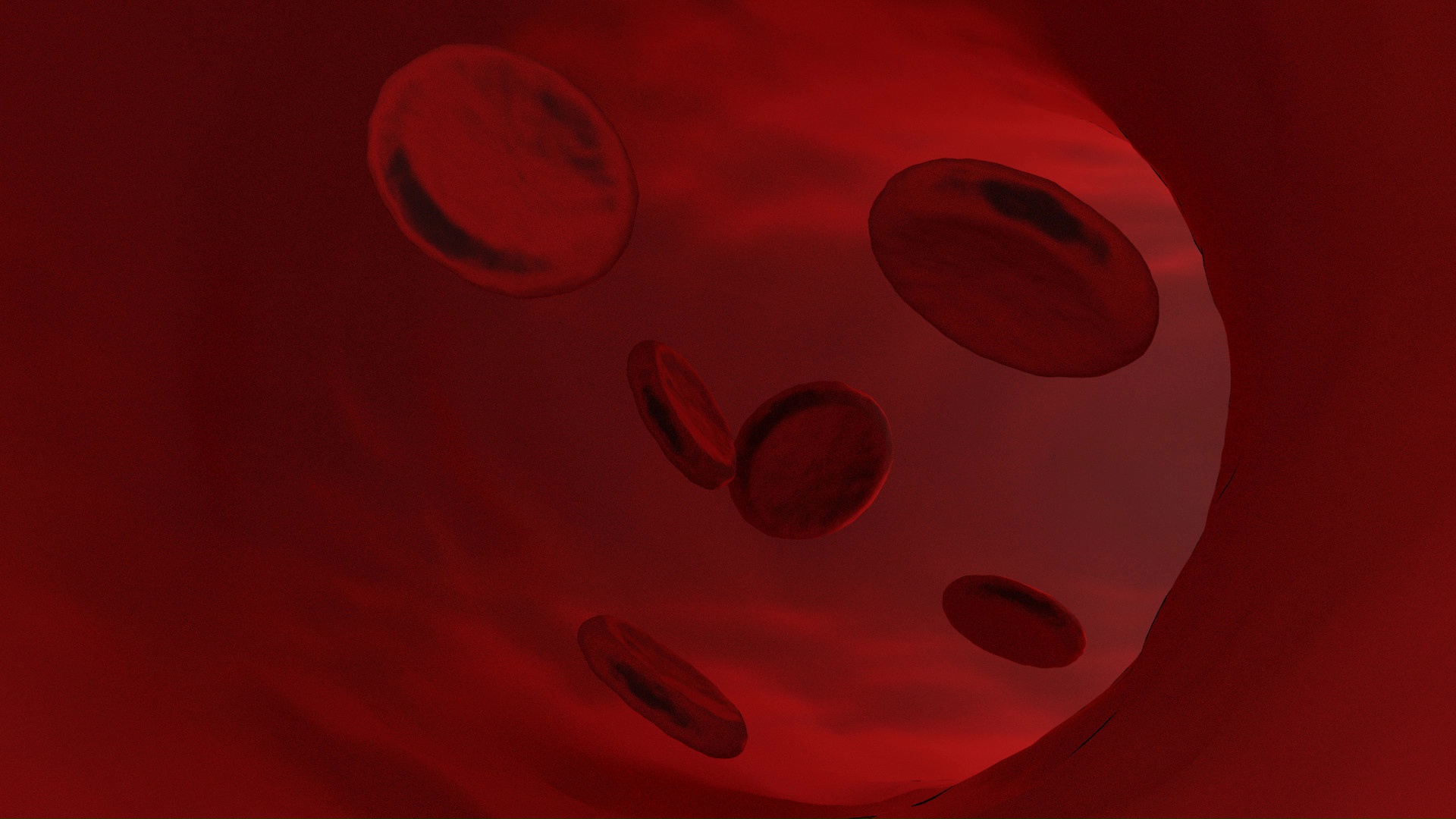 I then select a red blood cell, click on the X next to its Material, then click on New to provide it with a new Material; for example, a Diffuse with red color (0.8) and Roughness at 0.6, because I want an object that is not very reflective and has a blurred, disturbed aspect. 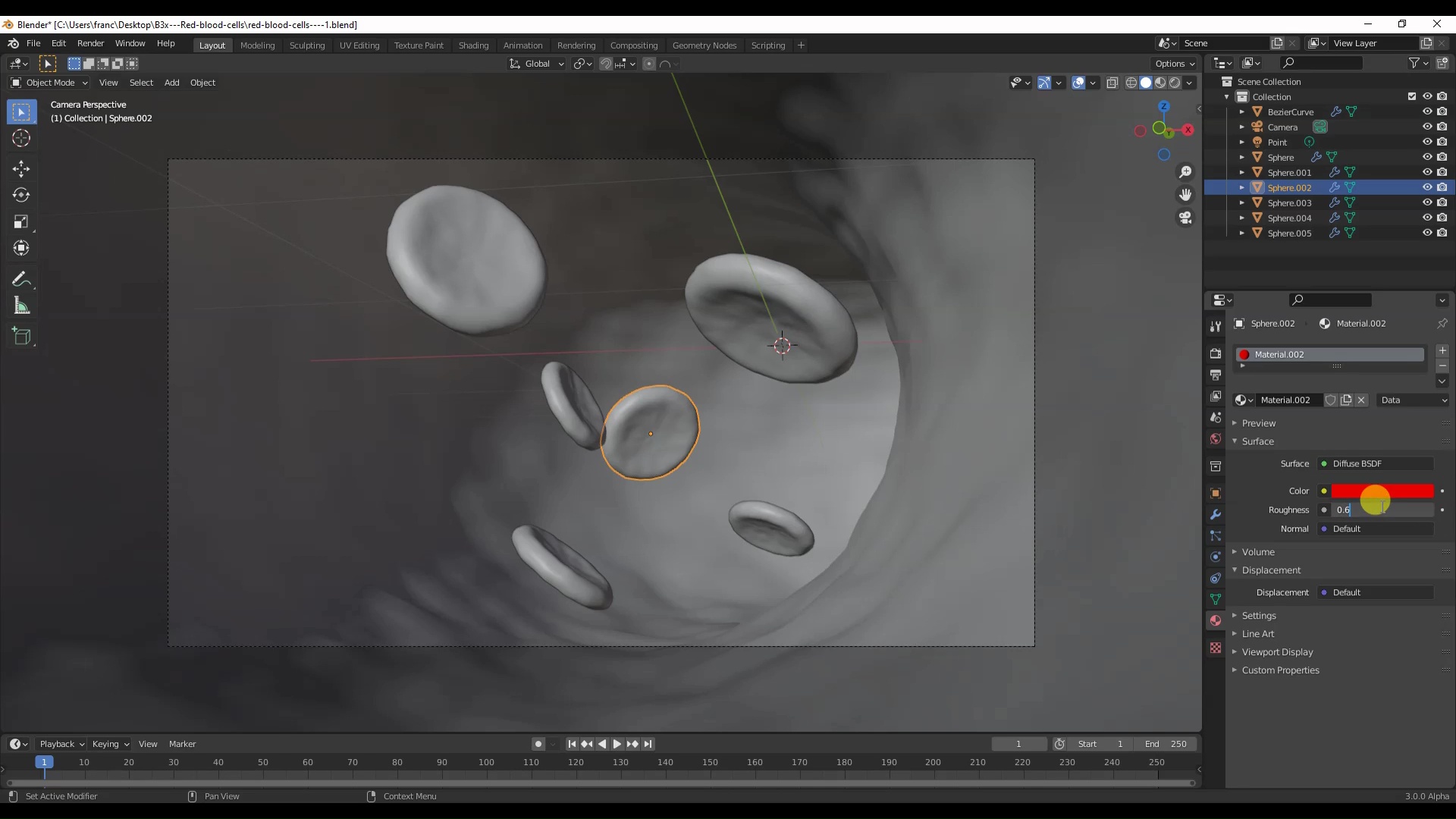 I therefore associate this Shader with the other red blood cells, as I did before with the blood vessel: I select all the red blood cells, taking care to select the last one with the new Shader, then I press CTRL L and choose "Link Material".

To add details to the blood vessel, I bring the Subdivision Surface value to 3 (in both Viewport and Render, of course), then I lower the World Background brightness to 1.0, because a too high value ends up eliminating the chiaroscuro and makes everything look "flat", without any detail. 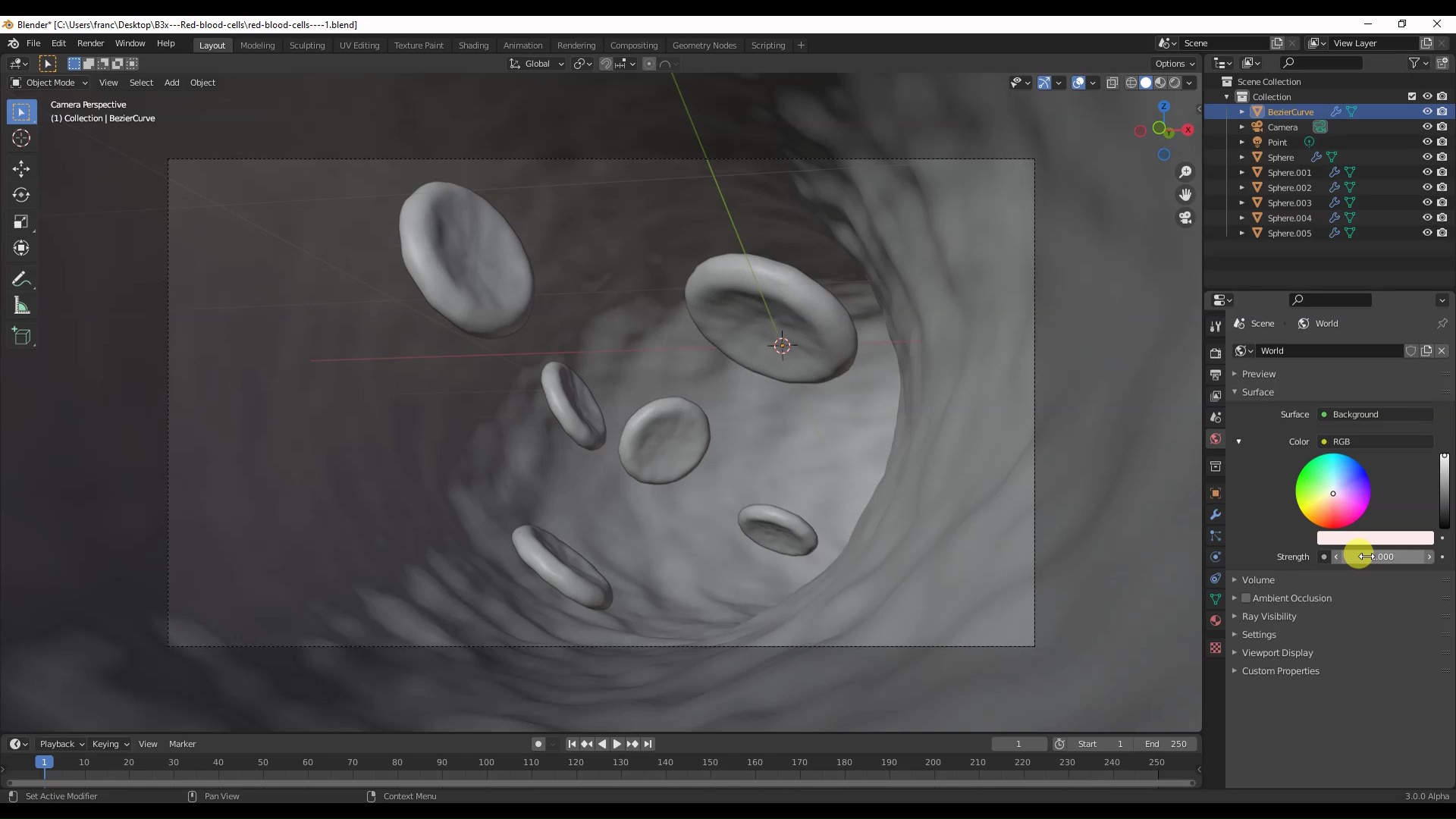 After making these changes, I start rendering to observe the final result (which is the same as I showed at the beginning of the tutorial, of course).

I advise you not to use denoising to create this type of rendering, because the noise contributes to the atmosphere ... at least, in my opinion! 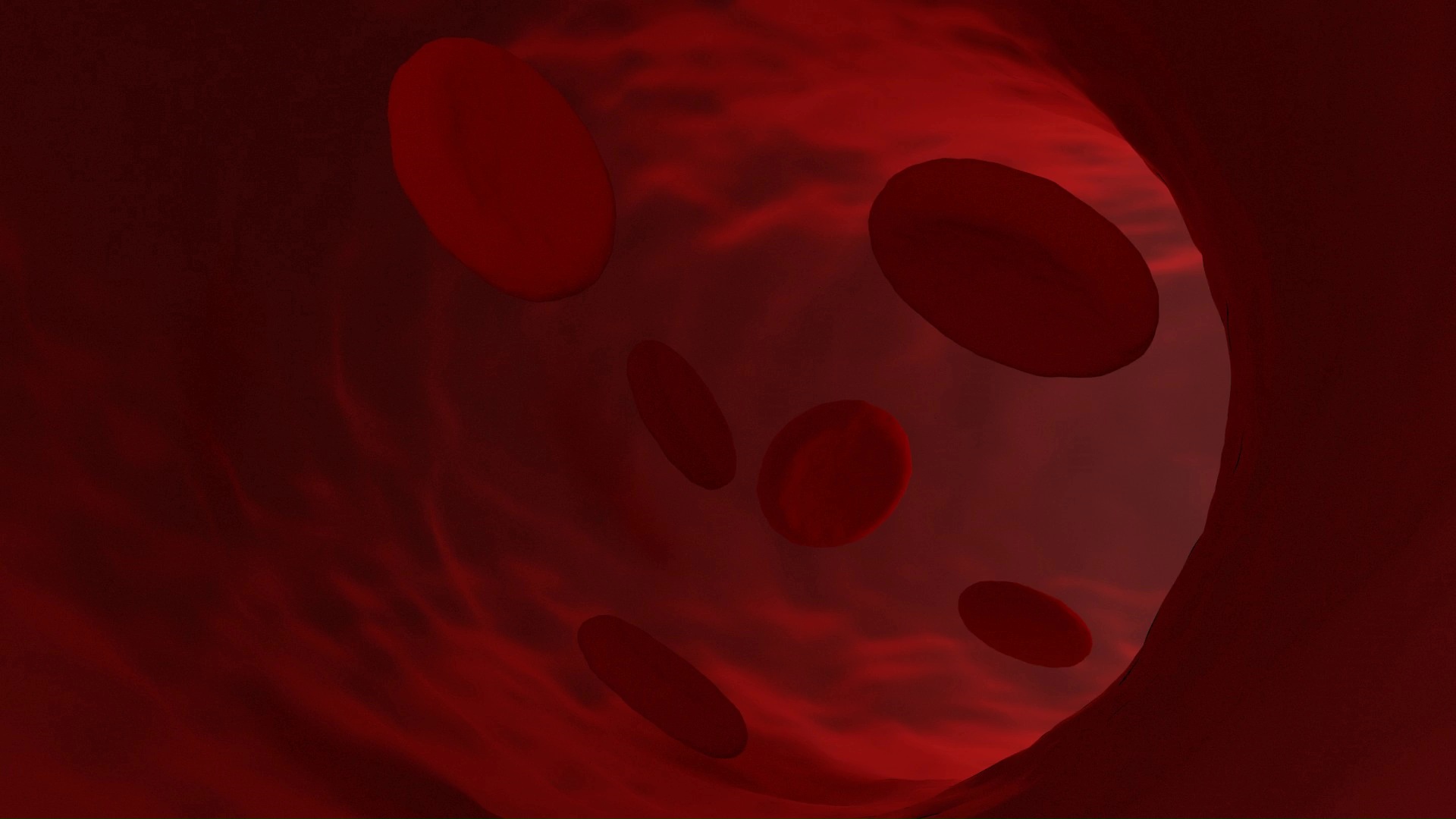 I like the new result more but, as I said earlier, this is a free representation, so it's up to you to change the parameters to your liking!

That's it for this tutorial! See you soon!

To keep yourself up-to-date on my activities or to contact me, you can follow me on Sketchfab.